Hello,
I noticed that in “Behind Bars” guitar’s string numbers may be placed below or above the stave, even for chords with stack numerals. I wonder if there is an option to place the strings numbers above or below as well and not only left or right.
I know I can add string numbers outside the staff using the playing techniques options, but those numbers are huge and I think they are better indicated for a series of notes and moreover the open string “0” is not available in the playing techniques.
Maybe having the string numbers above the staff is ugly but as a reader and not as a guitarist I find it clearer. 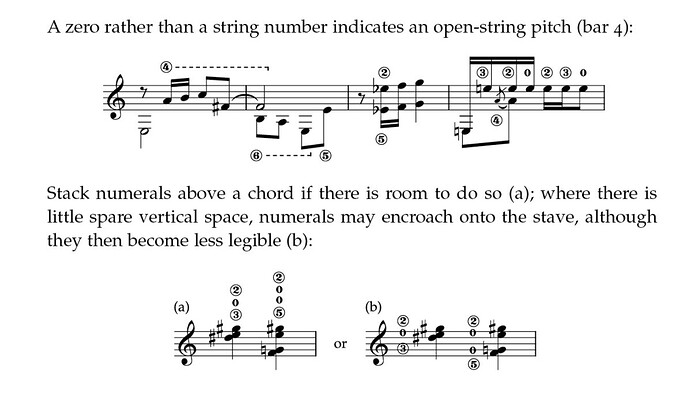 You could create your own custom playing techniques, with scaled-down versions of the default string indicators outside the staff for this purpose.

Yes that works a treat - I just duplicated each ‘String n’ and changed the scale to 75%and the Popover to just ‘strn’. I think I like the 75% - it’s a little bigger than the number within the stave but is clear without taking up so much space. Thanks (again!) Daniel.