When I try to set up my M Audio Hammer 88 Pro in Cubase the options in Studio Setup don’t match any of the instructions online.
I have made all the required in the keyboard itself so it should have mapped automatically to Cubase but doesn’t work.

Please can someone tell me how to get all the pads, faders and other buttons working? Currently only the piano keys and the modulator are working.

I include screenshots below of how it is currently set up! 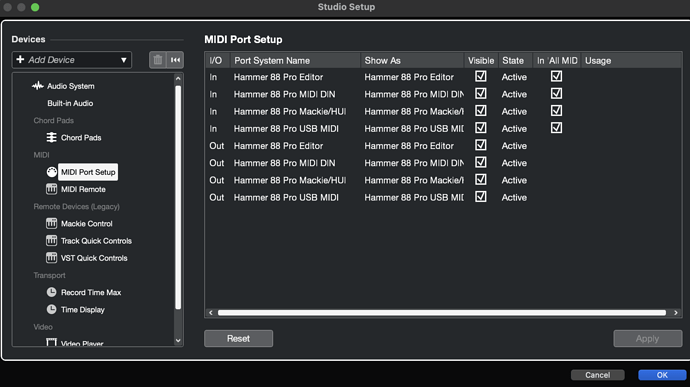 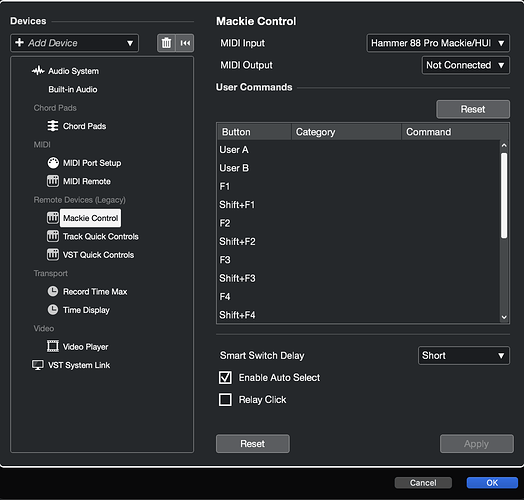 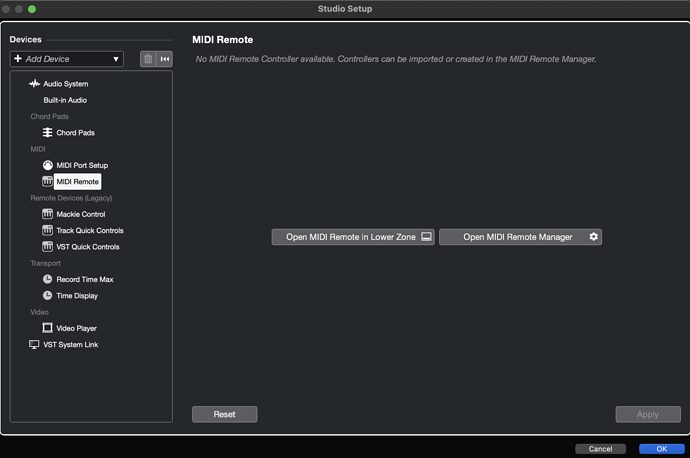 The process here isn’t “automatic”, but it’s not to difficult with a little explanation.

The MIDI Port setup shows your Hammer 80 has 4 separate MIDI ports. Each with a different purpose. All 4 are in All MIDI In - which means all 4 will send data directly to the active midi track in Cubase - that would mean for example that the Transport control MIDI messages from the Mackie/HUI port will go to the MIDI track which is clearly undesirable.

I had to go look up the Hammer 80 Cubase DAW user guide which you’ve no doubt found. For completeness the link is M-Audio

That manual does show the older Cubase Studio Setup but the instruction do map to the same thing in more recent versions Cubase.

You mentioned you have the hardware set so I’ll focus on the Software Setup section of that manual. Two most critical parts are:

So with the All MIDI In change (turned off for all but one) you should find you can record midi when not in DAW mode and your transport controls work with the keyboard in DAW mode.

In the guide Two of the Ports are NOT Visible - That will be MIDI DIN and USB MIDI. Not sure what those are but my guess would be they are a pass through from the Hammer 88s MIDI DIN and USB ports when you have other instruments plugged into them (I seen other keyboards that do this). If you aren’t using them I’d make the invisible too.

The MIDI Remote is a different beast altogether. You need to build an actual mapping to the Hammer 88 controls. I’ve not seen a pre-existing one for the Hammer 88 but perhaps someone else has one and can share.

I hope this is helpful.

Thank you so much! The stop/play/record etc are all working now, which is great. I guess the pads and faders require the MIDI remote set up?

If I read the Hammer 88 manual correctly then in DAW mode the Faders should work as part of the Mackie set up. (step 7 states this)

When NOT in DAW Mode the faders will behave like normal MIDI CC. There is likely a default value in the Hammer 88 and your VSTi will respond to if it uses the MIDI CC number. You can check if they are sending to the track using a MIDI Monitor insert on the MIDI Inserts for the track (MIDI Inserts is in the Inspector on the left, it’s probaby folded up). Add a MIDI Monitor and pop up its window then move a CC, You should see a list of events appear in the MIDI Monitor.

You’ll likely also find transport buttons will work when NOT in DAW mode - which may in fact be the condition you had it set to which is why the faders weren’t being Mackie faders.
I don’t know how to switch modes - probably a button marked DAW that toggles or another one that goes to “ordinary” mode or whatever they call it.

MIDI Remote would work , after configuration with the NOT in DAW mode - and could map the default Hammer 88 CC for any parameter it sends to whatever you would like to control in Cubase that midi remote supports. Technically with scripting you could use all the modes and confuse the living daylights out of yourself

. I suggesting getting comfortable with the DAW and NOT DAW modes before embarking on midi remote.