I experienced some inconsistencies in the harp pedaling. In the updloaded example (small cut from an arrangement for instrumental ensemble) the F## from measure 6 is coloured red in spite of already having a harp G natural pedal setting (= pedal setting for F##).
Furthermore an F# pedal setting is indicated in bar 9 but there is no F# for the next 16 bars (I cut down 16 repeated bars in the example between the measures now numbered as 10 en 11). I put in prior pedal settings in measures 1 and 7. All other harp pedal setting seem ok up to this point.
Input appreciated. Harp pedals-issue.dorico (519.6 KB)
BTW: I’m aware these bars are hardly playable in the right tempo; the arrangement is still ‘under construction’.

It’s not my place to tell you what to do, musically speaking, but Dorico’s harp pedalling works on the understanding that if you want the G string to be plucked (!) you’ll notate a G.
An F double sharp is enharmonically appropriate if this isn’t written for the harp (i.e. for Ravel’s original piano version, which has a D# major chord in the left hand), but it’s a non-existent note on a harp.
Getting all philisophical for a second: there isn’t a physical Fx key on a piano either. The difference is that pianists can read the note and recognise that a sharp means hit one key to the right of the pitch, and a double sharp means hit one key further to the right. It’s all in the hand. Harp writing typically works on the basis that the notehead indicates which string to pluck, and the accidental tells the feet what to do. There is no way for the right foot to turn the F strings into an Fx, so it’s not fair to harpists to notate a double sharp here.

For your pedalling on the second system, I suspect you selected the single A note at the start of bar 9 and then clicked Calculate Harp Pedals. If you apply Calculate Harp Pedals to a single note, Dorico reads ahead as far as it can. If you select multiple notes - even just the A and the C# that immediately follows it, Dorico will Calculate Harp Pedals just for that selection. It might be quickest just to do that line of Harp Pedals again, but if you like you can double-click on each of the existing harp pedal indications and overtype their contents.

Incidentally, on the second system it would likely make life easier if you used Bbs rather than quickly switching between A#s and A naturals.

You can also edit the pedal diagram manually by double-clicking it (or its signpost). In the popover, use ^ - , and v to indicate the pedaling.

Thanks for your replies, good to know!

@pianoleo Would like to quickly add a question here: Does Dorico’S harp pedal calculator respect 12-harmonics? The enclosed example (both staves treble clef) works on a harp, but Dorico is not happy with it. Do I have to employ a special functionality to tell Dorico that here are harmonics involved? 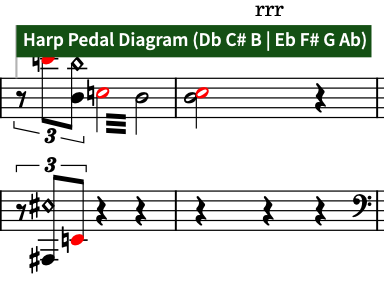 UPDATE 2:
Actually it seems that Dorico’s harp pedal calculator does not respect the 12-harmonics, right? 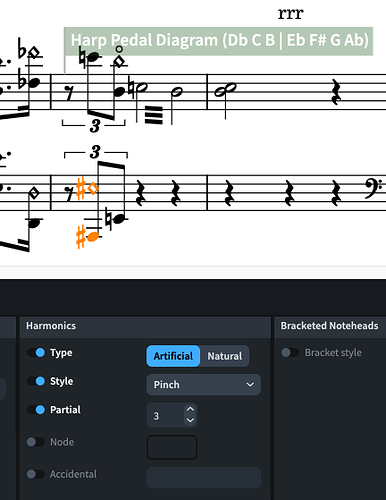 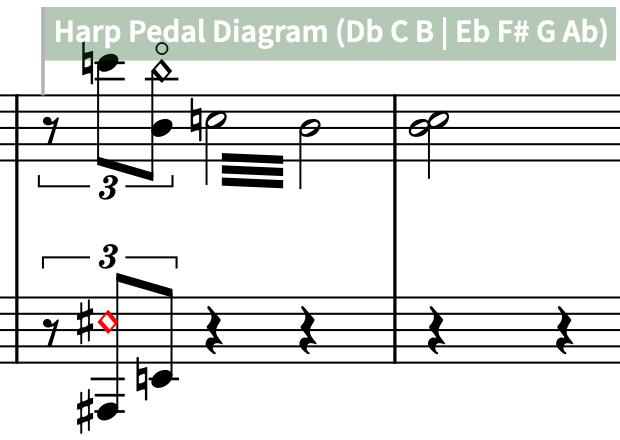 I wonder: does a twelfth-harmonic on a harp sound any different from a fifth-harmonic? They both produce the twelfth in pitch. On a bowed string instrument, a string has a ‘low end’ (tuning pegs / first position) and an ‘high end’ (towards bridge / tailpiece), so there is a technical difference betwee 5th and 12th. Do harp strings have a ‘direction’ wrt playing harmonics?