I’ve got another harp related problem. I want to notate a harp trem on a chord which should indicate to my knowledge a fast arpeggiation of the chord, like heard in this video: 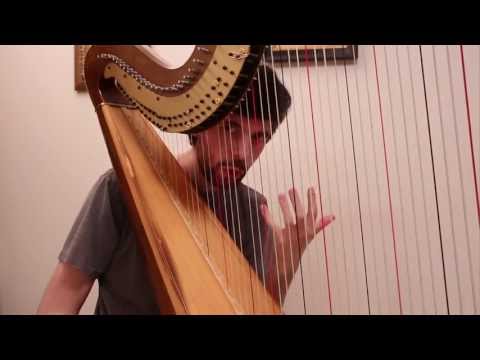 Sure enough, Doricos Tremolo tool doesn’t take that into account, and interprets this like a string tremolo (repeating the whole chords in short amounts of time). This is ok I guess, as the ornamental use is perhaps a bit specific. My question is just: Is there a workaround, which gives me the “look” of the trem and the playback of a fast arpeggiation? I tried manually fiddeling with the notes in the playback tab, but this is very labor intensive and a bit of a nightmare. Also, I don’t want to add additional tracks.
I tried messing with the ossia tool (while keeping the chord with trem, trem playback-switched off in the main staff), but ossias can’t play back, as mentioned in this site: Ossia staves

So, is there any another way to achieve a harp trem?

How are you attempting to notate this? As a single chord with a stroke through it, or as two notes with strokes between them?

Isn’t this notated as a 2-note tremolo? Or with the two strings tuned to the same pitch, for a bisbigliando.

Agreed with Rob, the two notes cannot be stacked, or as you said, notated on a chord, will need to be side by side.

Thank you all for your feedback, unforunately, it isn’t exactly what I search for. Please see the attached file.

1 is how I want to notate the trem
2 is how it sounds by default
3 is how I want it to sound (some something similar, exact note values obiously don’t matter that much here, Edit: Sorry, I messed a bit up, last note should be a g obviously)
4 is how I can write a 2-note tremolo
5 is how a 2-note tremolo sounds, which is close but not the same.

Any idea where to go from there?

You can’t influence how Dorico will play a single-note tremolo in order to make it a “rolled” tremolo. It would be nice if Dorico interpreted that kind of tremolo in that way, not only for harp but also for mallet percussion which requires a similar approach, but that’s not a feature that the software has today.

If you are using a harp library that has a recorded tremolo (or bisbigliando), you could map that to the expression maps for better playback

Hi OP, I tried getting the result you’re looking for, and here’s my shot at it. Does it sound like what you want it to be?
harpbis.zip (1.25 MB)

Hey, sorry for the late reply, but this was pretty much was I was looking for, it works!

It would still be nice to have this to be handled in Dorico so that one could use a prettier notation, but that would be just a cherry on top. As of now, this workaround is great!

I’ve seen this notated like option 4 above but also (I recall) as a triplet. When I tried to do that, playback only trem’s the first two notes and then played(upload://uEqyX9GmPwucGE8xd5VSUqC13QK.dorico) (363.3 KB) the third as a single note separately. I wasn’t too surprised; I was kind of stretching things there. But what did surprise me was not being able to show the tuplet number regardless of Properties settings.
tripletTremTrouble.zip (357.3 KB)

How about if you put this in an extra staff below, hide it and select the ”suppress playback” for the prettier notation? Of course only after you are done composing!