Is it possible to hide articulations like staccato? I have an expression map set up for these, but typically in Big Band music, staccato wouldn’t be used on a quaver at the end of a phrase, and would just be assumed. So I’d like to be able to have the expression triggered for playback, but not show those articulations on the score/parts.

Or would I have to create a custom playing technique, and map that in the same way and then hide it?

The latter seems to be the better!

Is there a way to set a playing technique to be auto hidden? Not as much faff as I expected as obviously I can point my “hidden staccato” to the staccato?

Also, is there a way to add playing techniques to multiple selected items at the same time? I’ve tried doing this whilst have a bunch of notes selected, but only the first selected item has the technique applied:- 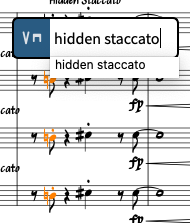 I’d say hide one, make sure that the signposts are visible. Select that signpost and alt-click everywhere you need it! That way, the playing technique will be applied where necessary and hidden as well!

I’m not really sure I understand this.

The signposts are the purple items here? 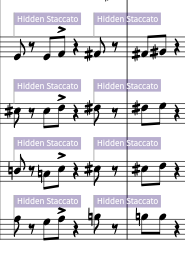 Also, I’ve noticed that the following notes retain the playing technique, unlike how a staccato symbol would be interpreted; so do I need a second hidden technique for natural after each instance?

the playing technique will be applied where necessary

do you simply mean that after I go in and add it to every note I need it will be applied, or is there a way to have it be the default when I have a quaver or shorter followed by a rest, and then taken off after?

The fact that the playing technique does go on after the point it’s applied shows that it’s not an attribute to the note, it’s a direction. You can set this up clicking on the button next to playback technique, when you edit your playing technique. It will open Edit playback technique (you probably have chosen staccato), and the articulation type might be direction. Try Attribute to see if that fixes your issue with a sticky staccato

If you want to add a playing technique to the same rhythmic positions on multiple staves, you can do so by showing the caret, extending it to cover the target staves, then inputting the playing technique. You may or may not find this faster than Alt+clicking to copy them, or assigning a shortcut to Edit > Paste Special > Duplicate to Staff Below (or indeed …Above).

@MarcLarcher hmm, when I checked how staccato was configured as you describe it already shows as an Attribute. 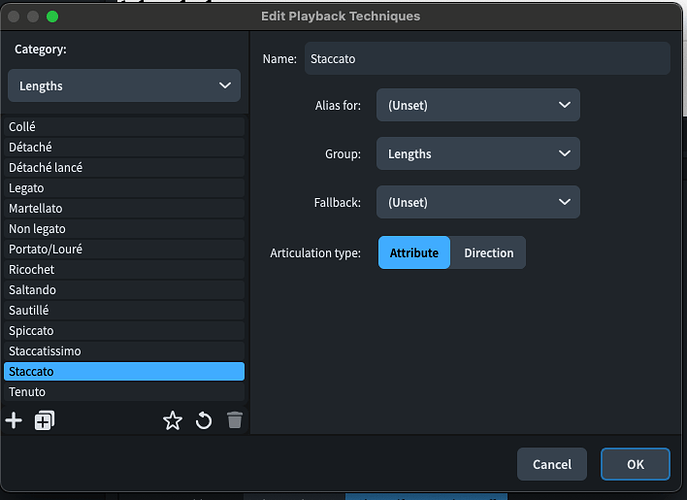 @dspreadbury brilliant, I knew there’d be a way to do this.

Quick bit of feedback on that though, when entering multiple playing techniques in this manner, only the final one remains selected after doing so, meaning that you have to go back and reselect the others to hide them here, as you can see from the immediate aftermath of entering a bunch here:-

Couple of nice features would be to be able to set the default of a playing technique to hidden, and to have all the items remain selected so I can change once. It’s not a biggie, but an annoying break to the workflow.

Thanks again all for the great responses; this forum has been sooooooo helpful in getting moving with Dorico.