Horizontal Scrolling inverted / opposite between Windows and Mac

I know there are several threads already on this topic, also on Nuendo and WaveLabs. But it seems it is getting ignored since more than 10 years by Steinberg.

Why is the horizontal scrolling behavior opposite on Mac compared to Windows?! I am working on both systems and it is driving me nuts when using a mouse with my macbook! I want to have the exact same behavior vor vertical and horizontal scrolling on Mac and Windows and I really do not want to use third party software to translate anything.

Give us the option to invert the horizontal scrolling direction in the preferences!

It can’t be that hard to implement this checkbox, I assume you just have to flip the signs on some numbers or scales!

5 Likes
Follow turns on when clicking on parts in time warp
How to inverse the direction of Shift + Mouse Wheel
Norbury_Brook March 5, 2022, 7:41pm #2

I thought that had been addressed in the C12 update.

tested yesterday with C12 Pro, had the same results with C11 Pro. Or did they introduce a preference setting I missed?

You can change the scrolling behavior in the Mac settings to match either the vertical or the horizontal scrolling with Windows, not both. Haven’t found anyhting in Cubase directly so far?

Anyone with both Windows and Mac can check that as well? Thanks

On Windows, I fixed the Cubase horizontal scrolling weirdness with the X-Mouse app. I recommend it, it works perfectly.

Next week, I’m getting a new studio computer, which will be a Mac. So I’ve been looking for an X-Mouse Mac alternative.

But if I understand your post correctly Honeyhill… on Mac the Cubase horizontal scrolling works the “right way”? Meaning, like in all other OS windows? Because that would be good news to me!

Would be nice indeed if Steinberg let us switch scrolling directions. It was really awkward using Cubase without the X-Mouse app. I mean - main Tracks window scrolls to a different direction than for example, ARA Melodyne window right below it.

Despite all this, I’m really excited to try Cubase 12 on my new M1 Mac next week!

Imho, as scrolling preferences are very individual, I’d like to have two checkboxes that overwrite the systemwide settings while inside of Cubase:

This would enable every user to check or uncheck the boxes as preferred instead of changing the settings in favor of one or another group.

yes I know X-Mouse and I also had something similar for Mac, but it somehow does not scroll so smooth anymore or the scroll jumps are higher than normal etc. It is not a perfect solution to me.

Would be great if you could check on your new mac this week. Yes the scrolling behavior on Mac is like all other DAWs or timeline based software like Adobe Premiere etc. But as I started on Windows and Cubase 15 years ago, I am really used to the “wrong” way on Windows and I also want that behavior on Mac.

So that’s why allowing us to change both the horizontal and vertical inside Cubase would be the solution to all this. And it would be great if all software vendors would implement this.

that would be awesome!

Yes, the scrolling behavior on my new Mac is just like I wanted. I’m happy.

Sorry for calling your way of scrolling the “wrong” way

I know people can be used to different things and the “usual” way is not always the right way for everyone.

Did you try adjusting your mouse settings in Mac preferences? At least on Monterey, there’s a tickbox that reverses scroll wheel behavior system-wide. Yeah it’s not a perfect solution having to click that everytime while using Cubase…

Like pointed out here many times, it would be great if Steinberg let us choose our preferred mouse wheel scroll direction.

I use 3 different DAWs + Melodyne in my studio (on Windows 10) and Cubase is the only one which horizontal scrolls the “wrong” way. Very annoying when switching DAWs or editing something in Melodyne, inside of Cubase!
Maybe an user option to select horizontal scrolling behavior in Cubase would satisfy everyone. ?

Yes, definitely +1 for this

Gets me every time!!

Hi all, you can give your vote at the top of the thread. This will make it more visible to the Steinberg team.

Answer from Cubase Support: „the scrolling behaviors is tied to the system settings in the OS“

They don‘t want to understand the problem. 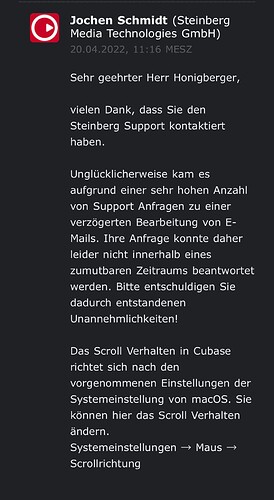 Same – all DAWs I use except Cubase are fine. And I really wish horizontal zoom-scrolling (ie cmd-scroll) matched Logic (or had a preference to switch it). I jump between Logic, Cubase and Pro Tools a lot (literally back and forth, depending on the jobs I’m given) and lack of consistency is very awkward

Big fat vote here. has annoyed me for years…

I am using an app called “SteerMouse” on my Mac, costs around 19 USD and it allows me to reverse mouse behavior on program level. Works for me very well actually, but still annoying that Cubase doesn’t work correct here.

I am working on Windows and I haven’t found any other program so far that scrolls to the right when I turn my mousewheel up.

Maybe @Matthias_Quellmann can tell us the reason behind this special behaviour?

@Matthias_Quellmann I’d even go further and not ask, what “the reason is”.
The question should be: When will you solve this?
I am like hundreds of other user whishing a solution for this:
SHIFT + mousewhee-scrolldown (inside the timeline) should scroll FORWARD- not backwards.
I’ve been working with mouses since day 1 of invention - this is just not common sense how it is.

Since there’s eventually people who got used to it this, maybe it should be fixed with an “flip mousewheel axis for scrolling” option somewhere in the menu?
@Matthias_Quellmann Please help us. This has been brought up countless times.
As a crossgrader from other DAWs I can tell you this is a huge frustration
and there is no reason to “get used to it” when all the other apps do it the regular way.

Just a small selection I did quickly of “supporters” on this issue.
There is propaby many many more of us if that helps:

How can I reverse mouse scrolling? Cubase

Some users reported that they hat issues with the Zoom direction of the mouse wheel + command function since Cubase 11.0.10. Some changes have been made in the update in this regards on macOS, but unfortunately they didn’t made it into the release notes. I will add them in the next days. The direction of the touch pad and the mouse wheel is now aligned to the system preferences in your OS. There is a setting “Scroll direction: Natural” in the settings of the track pad. If this is selected you…

I use the Shift+Mousewheel to scroll horizontally in my projects but somehow Nuendo has this feature inverted to all other applications on the planet?

It feels very counter intuitive, is there a checkbox I’ve missed somewhere?

Horizontal Scrolling inverted / opposite between Windows and Mac Cubase

Hi, I know there are several threads already on this topic, also on Nuendo and WaveLabs. But it seems it is getting ignored since more than 10 years by Steinberg. Why is the horizontal scrolling behavior opposite on Mac compared to Windows?! I am working on both systems and it is driving me nuts when using a mouse with my macbook! I want to have the exact same behavior vor vertical and horizontal scrolling on Mac and Windows and I really do not want to use third party software to translate any…

r/LogicPro - The mouse wheel + zoom/scroll tips I figured out after coming...

it is impossible to get used to it, unless cubase is the only software you use.