How can I make consecutive (de)crescendos relative in playback?

I’ve attached pics of my notation and the resulting automation, the problem is in the last two bars. 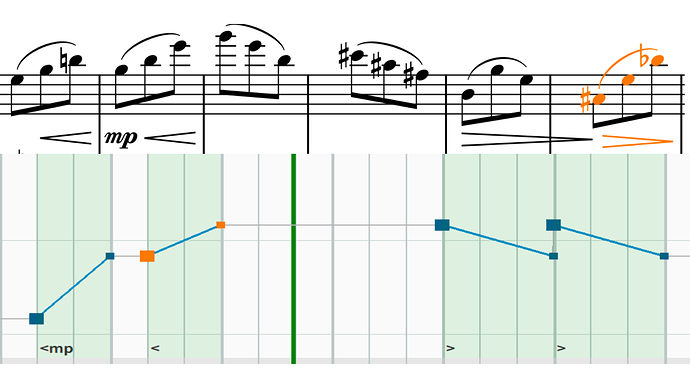 Welcome to the forum @lancejabr !

I don’t think there’s a setting you can change, but you could – in situations where you don’t want to show an immediate dynamic in the middle – add the start dynamic you want as an immediate dynamic, then hide it? That could be faster than dealing with the dynamics editor?

If there’s a rhythmic gap between the two hairpins, then it will automatically work as you expect, but when the hairpins abut, Dorico doesn’t “finish” the first hairpin. It has some heuristics to try to handle hairpins that are supposed to show phrasing rather than to express a true diminuendo, and one of the factors it considers is consecutive hairpins in the same direction that are close together.

If you don’t intend these hairpins to represent phrasing, then I would suggest eliminating the second hairpin and extending the first one to cover the range of the second one.

Thank you both for your explanations.

@dspreadbury, I played around with what you said. Just to clarify in case someone else has this problem, it seems that the two hairpins have to start a minimum distance apart in order to be relative. In the score I’m working on, 3 measures appears to be the magic number. Even if they abut each other, it works as I was expecting as long as the first one starts at least 3 measures before the second.