Hi,
I’d like to use an alpine horn in a score along with a french horn. I realised, that the alphorn sound (plabyck with note performer 3.3.0) sounds one octave too low. It should transpose the same way as french horn (in F or F# or whatever needed); how can I change this???
Any advice welcome.

Normally it would be easy because you could specify an octave transposition in the alpenhorn’s expression map, but this is made more difficult with NotePerformer because it uses a single expression map for all instruments. Your best bet might be to contact Arne Wallander directly and ask him to check the range of the alpenhorn in NotePerformer.

I contacted Arne Wallander as suggested…

I see no difference between NP and HSO in playback. Dorico has a different transposition for Alpine Horn. If you copy notes from French Horn to Alpine Horn, they’re notated an octave higher.

Arne got back to me and asked if there is no feature to set the transposition behaviour in Dorico itself, since it would not be possible to just edit the expression map of Note Performer in order to change the transposition.
So it seems to me, that the Dorico Team should please adress this wrong transposition effect.
Please adjust the transposition of the alphorn so that it is the same as the french horn - not one octave higher like it is now.

For now, you can just add another French Horn and rename it. Both NP and HSO already use the FH patch for playback.

Can you provide a citation for me so that I can verify that we really have got the transposition of this instrument wrong? It would be reassuring to have some additional documentary evidence before I make the change.

“The Musicians Guide to Acoustics” by Campbell, p. 359
“Modernity, Complex Societies, and the Alphorn” by Vignau, p. 13

Great, could you actually provide those pages, Dan?

It’s a little vague. I mean, everything is really an argument from silence. In all discussions of alpine horn transposition that I’ve read, an added octave is never mentioned. It’s always just an F (or F#, which I hadn’t been aware of!).

Those two references seem very vague about notation. Maybe a good option would be to contact a modern ensemble like https://www.hornroh.ch/en/hornroh-3/ (and listen to the Haas Concerto Grosso link on that page while you are there!)

Out of curiosity I searched about this and found usefull informations on this site:
https://www.alphornmusik.ch/index.php

But as I am not completely sure I asked at the website and I am waiting for an answer.

This example leads me again to think that it would be very welcome if in Dorico the user could be able to add new instruments and could specify the tuning (also for existing instruments).

If it’s in F, I reckon it would be written a fifth higher, not a fourth?
(Or maybe a fourth lower in bass clef, perhaps?).

If it’s in F, I reckon it would be written a fifth higher, not a fourth?
(Or maybe a fourth lower in bass clef, perhaps?).

Yes! Of course you are right, I should have written a fifth instead of a fourth!
I corrected my post.

In the meantime I exchanged a few e-mails with Hans-Jürg Sommer from https://www.alphornmusik.ch/ and he friendly pointed me to a usefull table on the following site describing the exact frequencies of the most common Alphorns:
http://www.heimatklang.com/Spielbare-Toene-mit-dem-Alphorn/
(they sell several Alphorn modell)

For any one who may be irritated (as I was) with the very low tones on this table (for example F at 43,654 Hz for the F-Alphorn) because I could not hear such tones in the Alphorn music I could find, Hans-Jürg Sommer explained me that the first tone (the root tone) is practically almost never used in any Alphorn melodie because it is too grumpy.
It can be sometimes used in a group with 8 or more players in the final chord.

I hope this helps

Thanks for taking the time to follow up on this for me. I’ll correct the transpositions for these instruments to remove the unwanted additional octave transposition.

Please adjust the transposition of the alphorn so that it is the same as the french horn - not one octave higher like it is now.

This may not be officially supported, but you can do this yourself by modifying the instrument definition stored in the instruments.xml file. On a PC this is located in Program Files/Steinberg/Dorico3. Just be sure to make a copy of it first in case you need to revert to the original file.

Find the Alphorn entry, then change the transposition settings to whatever you require. 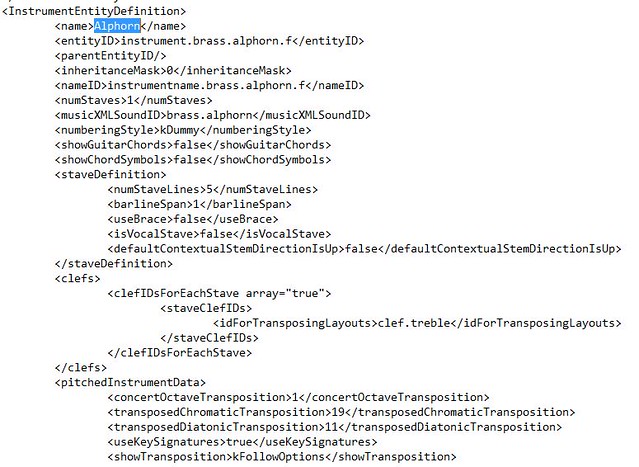