How to combine multiple audio file or montages into one Montage *with track markers*?

Color me stupid, but I cannot figure out how to combine multiple audio files with Track markers into one Montage that preserves the track markers.

It seems weird that, from a single audio file, you can create a Montage and have the option of importing Track markers at the same time. Perfect. But if creating a Montage with multiple audio files, you do not have this option. Why not? And everything I’ve tried to add the 2nd audio file to said Montage adds/imports it without the Track markers. Surely I’m missing something, but it is certainly not obvious…

What’s the magic operation that I’m not seeing?

There is a lot of grey area in this point but if you have WAV files with markers embedded, this feature allows you to easily add them to the Audio Montage: 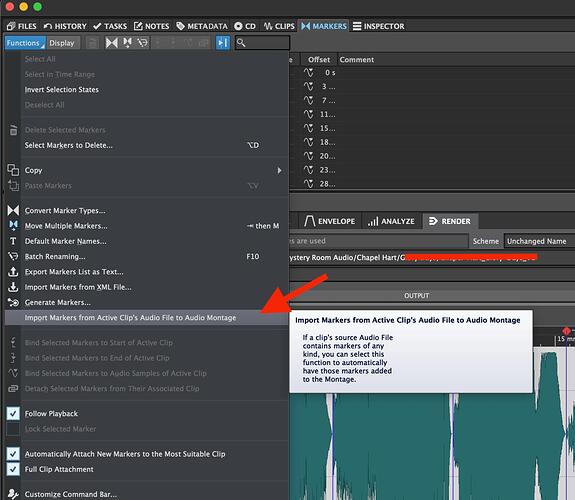 thanks, Justin, i’ll try that tomorrow!

I find it baffling that this is so obtuse - why isn’t the Import Markers option available for Create Montage from All, just like it is for one? It was a deliberate design decision, or they’d have used the same dialog box. Or why isn’t Importing Markers an option for any of the myriad ways of adding/importing audio files to a montage? I mean geez, adding multiple audio files into a montage is part and parcel core montage functionality; you’d think that the default would be to make use of any/all information in each audio file, rather than now, where you get the option to use marker info from the first one, but not subsequent ones; for those you have to invoke explicit commands - and know the obscure and obliquely worded menu operation to do them.

I really love the power of Wavelab, but IMHO it needs a serious UI overhaul, to smooth out these kinds of weird things and make them more logical and consistent. Even changing to wording to be more clear and consistent/reflexive would help. It reminds me of the ‘88 Porsche 911 I once had, where they added controls for new features, like intermittent wipers, in weird, random places. Eventually they redesigned it to make sense….

Welcome to the wonderful (and sometimes weird) world of WL.

I find it baffling that this is so obtuse - why isn’t the Import Markers option available for Create Montage from All, just like it is for one? It was a deliberate design decision, or they’d have used the same dialog box. Or why isn’t Importing Markers an option for any of the myriad ways of adding/importing audio files to a montage? I

Because this is uncommon (I don’t even know if any other DAW provides this feature). I don’t say it’s bad to be willing so, I say it’s unusual. Now, I might be wrong…

You nailed it, Thomas! I really appreciate this forum - and especially all of you for helping.

Me, I’ve owned WL from the very beginning, same with Cubase Pro and Dorico. I highly recommend all three to anyone who asks. I do the vast majority of my work in Cubase; most of my WL use is as an audio editor and analyzer. When I need to use Montages and media things, invariably I have to relearn them and have the “joy” of rediscovering how to do things.

There’s a bit of relearning infrequently-used features required in all three wonderful Steinberg products; they’re just so full of great features. Yes, it would be glorious if they all had a similar look-and-feel, but it’s certainly not not a deal-breaker for me. Each app has their own, rather unique personalities, with some inevitable warts and “missing” features - but certainly not enough to make me switch! Even if I did, it would just be exchanging one set of issues for another.

Incidently, Dorico may be the most amazing and gorgeous piece of software I’ve ever seen. And virtually all of the desktop features and GUI are in the iPad version, too - extremely impressive! (and highly useful, too)

PG1, here’s an analogy: imagine you’re editing a Word doc, copy/pasting from other docs. But when you paste into the new doc, only the first block retains the formatting. Most people would find that strange - and frustrating. Fortunately, Word does give you the choice of keeping the formatting - or not.

Even if you never need that capability yourself, it’s easy to see why others would, no?

And big thanks to Justin - your answer worked perfectly!