I keep all of my sounds and synths off-board on an SSL drive. How do I get D4 to locate them and use them?

I suspect the Steinberg Library Manager (program) might prove useful. Otherwise you would have to go into Dorico and point it to the correct path(s) to scan to find your plug-ins.

We have to differentiate here between sound libraries and plug-ins. For the sound libraries it depends on the vendor and how they manage their sound data. So there is no general advice.
As far as the factory contents of Dorico is concerned, there Derrek is right, you can use the Steinberg Library Manager (gets installed together with Dorico) and move the HALion sound libraries to a drive of your liking.
VSTinstrument plug-ins are yet different again. They need to be found by Dorico. Also, we have to regard VST2 and VST3 plug-ins differently. VST2 plug-ins can be placed virtually anywhere, but then you have to tell Dorico where to look for them. In the Dorico Preferences dialog on the VST Plug-ins tab is a section where you can specify the VST2 search paths.
Now the VST3 plug-ins; they are always looked up under a specific location, namely C:\Program Files\Common Files\VST3 and you can’t change that location or specify additional search paths.

For example, I have a nice selection of modeled piano sounds from Modartt (PianoTeq 7) I’d like to point Dorico to. How would I do that?

I can access all my PianoTeq instruments without any issues… Can you access them, without opening Dorico, simply by opening the PianoTeq app? If not, there’s a problem with your installation.
If external libraries are on external drives, make sure you connect the drives before you launch Dorico, as the startup process is where Dorico lists which VSTis are available.
By the way, although it makes sense to have heavy libraries on an external drive (Spitfire, VSL, EWQL, Orchestral Tools…), PianoTeq is really lightweight… Why don’t you install it on your local drive?

In this example, you don’t point Dorico to the sounds, you just point Dorico to know about PianoTeq, but that is actually automatic, because PianoTeq7 is VST3 and VST3 plug-ins are required to be installed in a certain location, so Dorico picks up PianoTeq automaticallly. As to what sound libraries PianoTeq is using and where they reside, that is of no concern in Dorico. You choose within the PianoTeq GUI which sounds to load. During project saving Dorico asks each plug-in for its current state and saves this data in its own project file as a transparent data blob, i.e. it does not know how to interpret that data. On Project loading Dorico simply instantiates the plug-ins and sends over the corresponding data blobs. The rest is up to the plug-in.
So you have to ask Modart how you point PianoTeq to the sounds or how to move them to another disk.

I think I may be having a bigger problem, simply with routing.
I say this because when I, for example, open the PLAY menu and tap on the piano track, under “Routing”, the ONLY option I have is “02 HALion Sonic SE” (even though I’ve got “HSSE + HSO (Pro)” selected. Please see screen shots. 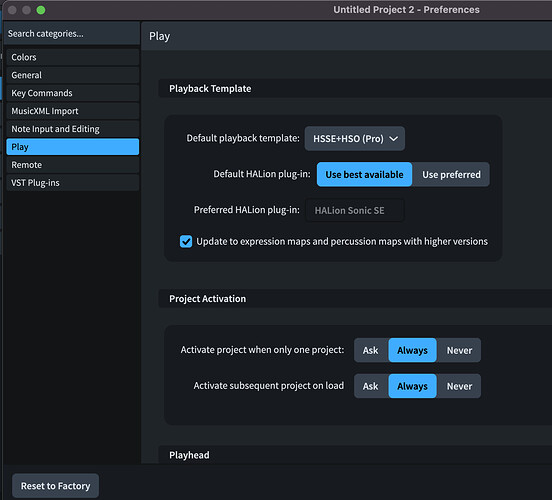 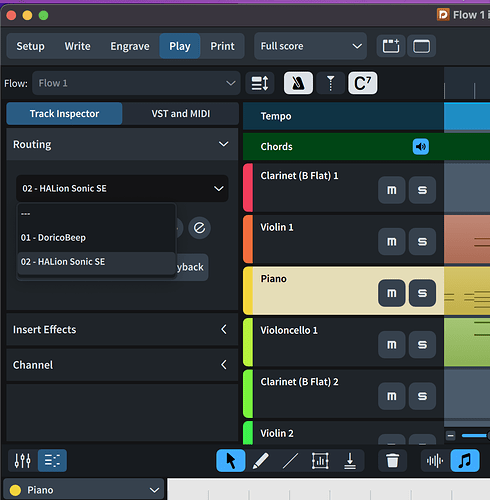 That’s correct: HALion Symphonic Orchestra is loaded by HALion Sonic SE, so you won’t see anything different in the list of plug-ins currently in the rack.

If you want to use PianoTeq on your piano, click on the VSTi button (right to Track Inspector), click on the + below the present VSTi (HSSE here), choose Modartt>PianoTeq. Then select the piano lane, click on track inspector, change HSSE to PianoTeq. Now your piano will trigger PianoTeq.
It’s much easier if you create a playback template that will load PianoTeq for every piano, but that is another topic.

Okay, so new problem. I followed @MarcLarcher’s guidance on my piano track and was able to get PianoTeq to sound on that track. But now, ALL the tracks only have that PianoTeq sound sounding…!
IOW, that action erased the 02 Halion Sonic SE settings I had for the other instrument tracks and ALL show up as the PianoTeq piano.

Sadly there is no such thing as intuitive. Intuitive is a myth.
People come from different backgrounds and with different expectations.

In the case of assigning sounds: if a program wants to give sound control approaching that of a DAW, then its interface is probably going to resemble aspects of a DAW, not something users of former notation programs will be used to.

For what it’s worth, clicking on the + was the first step I described…