How to hide all instrument change labels for a player, or use multiple VST's for one instrument

I am wondering if someone can suggest a solution, or at least a faster method for my time-consuming workaround.

In my current project, I am using some older VST samples (EastWest from ~15 years ago) for playback. For the single cello player for example, I have a staff each for long sounds, short sounds, and pizzicato sounds. The instrument change feature nicely makes the music of those three staves into one staff in the score and part page views, but then has instrument change labels like “To Vc” that I don’t want to appear, every time the music changes from “long sounds” or “short sounds” for example. But this project also has some “real” doublings, like the single flute player also plays piccolo and alto flute, so there are some instrument change labels I do want to appear.

When I first got workshop parts to the performers for this project, I made each unwanted type of instrument change label invisible (by changing the scale to 0 and the color to transparent, and I see now I could have just changed the text to a blank space and hid the prefix in engrave mode. ) I had to do this many times, in both the score and the parts, and if I changed something like an aspect of the layout, they would reappear and I’d have to do it again. This took a looong time and was easy to miss some.

As I make my parts again for the final version, can anyone suggest a faster way? Other than using only a single staff per instrument by acquiring VST samples that have multiple sounds within each, or switching back to the default playback samples (because I want to use my current ones for mockup audio).

you could erase (or name them according to technique, e.g. pizz.) the staff names in setup …

This seemed hopeful fratveno! Though Dorico won’t let me make all the instrument names under a player blank, or then it automatically numbers them at least 1 and 2. So if I name for example the first cello stave Violoncello and have the others blank then I still have a lot of instrument change labels back “to VC” to hide. But that still might save some labour. And I learned I can label thoses staves by player names rather than instrument names so they still appear with labels even if they are on an “instrument” with a blank label. It doesn’t help so much to name the pizz. one pizz, because then there are labels "pizz."too early for normal practice, right after the non-pizz. music ends, that I still have to hide; might as well be blank.

I was able to remove all instrument names held by a player and the automatic numbers only show up as staff labels (and not as instrument changes) which, as you say, can now be remedied by setting player name as staff label. Well, regardless of approach some manual hiding will be necessary…

I should add that this solution seems to be a benefit of Dorico 4. In Dorico 3.5 there was no option to show player name instead of instrument name, so instruments named with blank text would show up as staves labelled with numbers.

Perhaps you shouldn’t change things for your current project, but a simpler workflow could be to use different voices for different VSTs. That can be done by activating IRV in play mode and routing each voice to desired VST instrument.

And the new Dorico 4 MIDI-import options might prove another solution for future works.

Yes, those sound very hopeful to explore for the next project, thanks SampoKasurinen and Derrek!

Alternatively, you can make sure the notes for each sound are in a different voice but belonging to the same instrument, and utilize independent voice routing to set up different sounds for each voice.

Right, Lillie_Harris, I wish I had done that at the start! Although could that have been done with Dorico 3.5? Or is that new to Dorico 4?

I’ve hit a big snag with the workaround: cues! Dorico labels the cues according to instrument; no apparent option to label them according to player. So with this method, showing cues from these staves leaves them unlabelled, which is no good, and I need to have a lot of those cues. Can I even label them manually? Any suggested solution, other than changing my multiple staves into multiple voices on one stave across my whole project, which I fear I won’t have time for

You could try reducing them down onto one staff and handling the voices after the fact, or paste each staff one-by-one onto a shared instrument staff using paste into voice to make sure they go straight into separate voices.

Independent voice playback was available in 3.5, but obviously the look of Play mode has changed significantly.

So I bit the bullet and started switching to what I should have done all along, voices with independent routing. And yay for Dorico, it seems very hopeful to be fast enough, and I haven’t even worked with voices much yet in Dorico, nor could I find any documentation on IRV! I succeeded with my shortest flow, but I’ve encountered a mystery as I tried to keep going in another flow. I added the additional voices into one staff, and IRV is turned on in that staff, but no additional tracks appeared in play mode for me to route. I expected them to appear there, and already routed from my routing in the other flow I did with me leaving the default “Edits apply to all flows” chosen. How can I fix this, hopefully in a hurry 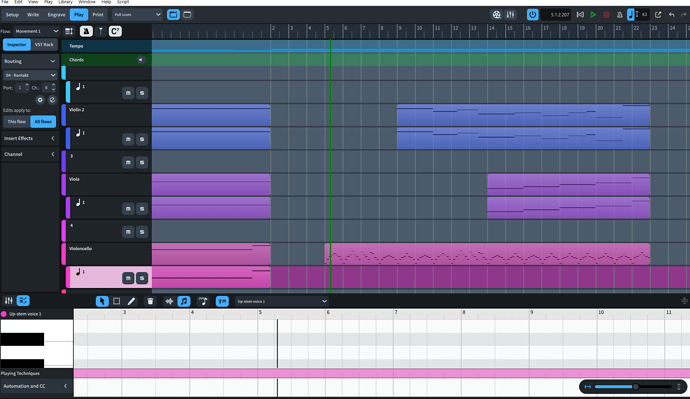 It seems like the tracks will appear later, at least after re-opening the program. Screenshot attached of the same spot, after Dorico “corrected itself?” later. 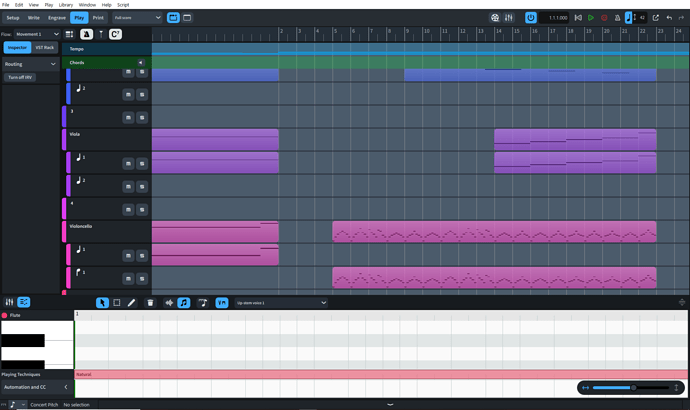 Capture21918×1140 128 KB
Sometimes too the new tracks for the voices will have appeared but not playback for no apparent reason, or not if soloed. And then that will seem to correct itself after closing and reopening the program. Not sure if these are bugs with the new version to be sorted out, or someone can please point out what I am missing.
dspreadbury January 29, 2022, 9:50am #17

We’d need to see the project itself to be able to tell you why you’re not seeing additional tracks appear for voices you’ve already created.

My experience is that new voices only appear in IRV after restarting Dorico (or maybe just the project?). Voices from other flows that are re-used in another flow doesn’t need a restart.

No, it should be the case that new voices appear right away, or at the very least as soon as they have notes in them.

Good to hear that it should work that way. Just tested it and there is no instant update in play mode, but a few new voices actually appeared after a while. The two new soprano voices that appeared actually showed up under the organ voices, but when I clicked a solo or mute button they jumped up to join the other soprano voice. The amount of voices is of course not realistic. 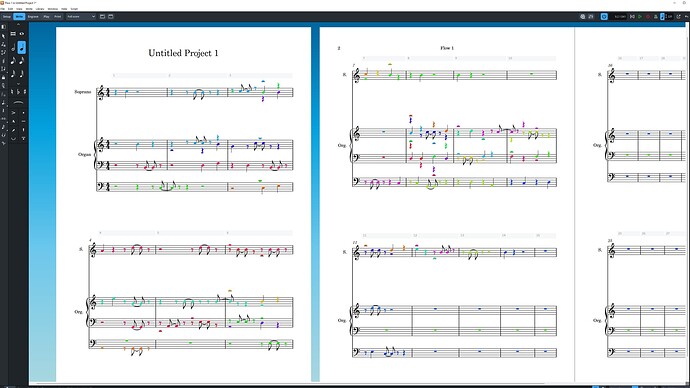 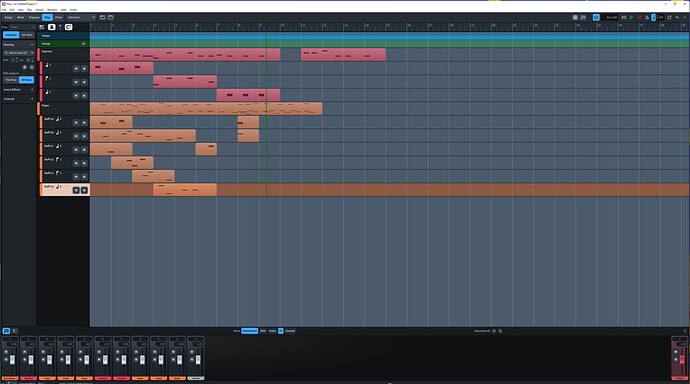 Play mode1920×1071 108 KB
A few new voices, but as you can see from the main track all the notes doesn’t have a corresponding voice track. 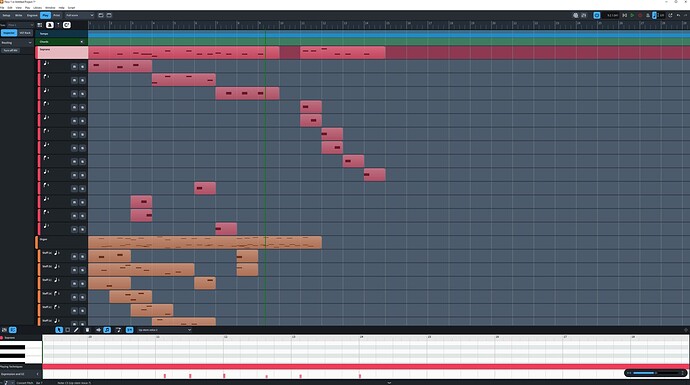