How to notate slide (bottleneck) guitar

I am moderately proficient with Dorico on a variety of instruments, but I seem to have hit a wall when it comes to notating fingerings for a slide guitar. I have spent enormous time trying to get around the wall, but still to no avail. Perhaps you should just issue a warning that Dorico 4 and previous versions are not at all set up to do slide guitar notation.

For example, if I search the manual on “slide in”, I get references on how to change the visibility if the slide-in is already there, but never how to PUT it there. The instructional videos are even more frustrating. One features a score labelled “Theme for an imaginary western” which already contains nice slide symbols, including slide-ins. Once you get to the end of the video, you realize that how to put the slide-ins there are never covered.

Part of the problem is that a slide is more a movable capo than a finger sliding on one string between frets. To make matters worse, slide guitar players are more or less evenly divided on whether to use the ring finger or the pinky finger to hold the slide.

So, I will continue to follow any leads that I can find. If I recall, I have already checked some of the “Your topic is similar to…” threads and found them not helpful. I will keep trying, as I really like Dorico overall for most music notation.

I suspect that my problems here stem more from the confusing or missing documentation than from any basic functionality of Dorico 4.

Welcome to the forum @stuschaffner ! Is this the page in the manual that you were looking at? This is indeed how to put slides there – they’re something that you can show in certain circumstances (given at the start of the page).

You can hide/show slides between notes played by the same left-hand finger on the same string on fretted instruments.

Yes, thanks. That was one of the many blind alleys. The very frustrating video was “Tablature for Fretted Instruments: New features for Dorico 3”. The example with the slide-ins already in it was at approximately 3:00

@Lillie, I see that you pointed out that the manual page did mention, in an oblique way, how to enter them. I tried all kinds of variations on those instructions and never got a slide-in to appear. I did turn the “slide-in” button on with the target note selected, but again, no indication that anything had happened. I also tried to slide between two selected notes, but again no change.

I did see that there was another notation for some sort of string pre-bend, where you had to specify a ghost note for the degree of pre-bend. Do slide-ins require this ghost note? How far you slide on a slide-in is more like how strong a tremolo is.

Could you share your project, or a cut-down version of it? In order to use the Slide in property, the criteria listed at the start of that page in the manual must be fulfilled (the instrument must be a fretted instrument like a guitar, you must have added the fingerings, and the notes must be assigned to the same string).

Guitar pre-bends and pre-dives are techniques commonly performed on electric guitars, where the performer changes the initial sounding pitch of strings before playing notes, either by bending strings to tighten them or using the vibrato bar to loosen...

Thank you for being so helpful. Yes, the manual page you listed is one place where I found the extra unplayed notes. I don’t really think that the angled line is at all the right concept here. Conceptually, I just want the pitch equivalent to a standard slur. The score I am attempting to transcribe simply shows a slanted straight line between two notes, or in the case of a slide-in, just a slanted line with no explicit source note, just a target note. The example in the YouTube video shows exactly what I want. I don’t see where the video ever shows how to make that happen, or perhaps how to make that visible.

I don’t know how to give you a project, so I simply added the file to this email reply. If there is a better way, I will gladly use it in the future.

That’s exactly what I meant by sharing a project, so that’s perfect – apologies for not outlining that in more detail. 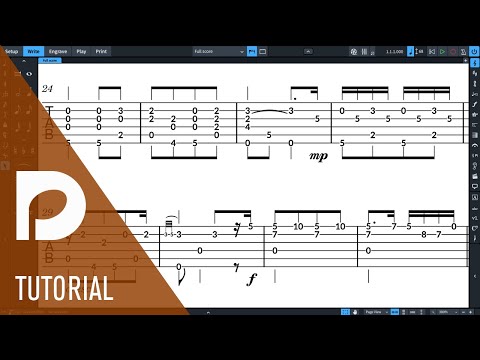 I think that’s simply a glissando line – instructions for how to input those is here:

Inputting glissando lines with the popover

You can also use jazz articulations before/after notes, which I can see you’ve already done in this project. They can be curved or straight lines.

Thank you! Now we’re getting somewhere. I looked up glissando and also found out about portamento. I can see that violin technique has supplied answers to a lot of these problems long before slide guitar became popular. I had long thought that the wiggles on the glissando meant an arpeggiation on a fixed-pitch instrument like a piano. Not at all so on a violin.

I am fairly new to this forum and did not know that you would make the project available. This makes perfect sense, but I do want to stay within copyright guidelines by stating that the problem came up in a slide guitar course that I bought from RJ Ronquillo. My Dorico project is an adaptation of a score in the course. It is modified somewhat to meet the needs of me as a student and also my teacher. Anyone on this forum is, I think, welcome to download the score in order to discuss the notational problems. If you are a slide guitar student and want to use this particular rendition of “Dust my Broom”, then you should buy the course yourself. I can heartily recommend Ronquillo’s teaching materials.

In case it’s helpful, I think this is the original project that would have been used in the video.

There are a few notations that do similar jobs on guitar, but they’re mostly on the ornaments palette. There’s the glissando line (for a slide between two notes), the jazz articulations (for sliding “from nowhere” into or out of a phrase) and then the guitar bends. Pre-bends aren’t on the ornaments palette because they’re so closely attached to their target note - they’re in the properties panel instead.

(The tab wouldn’t be present in a classical guitar score, obviously - I’ve added that myself.)

Ceterum censeo one needs to check if “allow fingerings inside the staff” is set to “on”, otherwise the slide-in property will not appear! And do not forget to then switch the fingerings back to “outside” in the properties panel…

Thx for the notice, I edited my post accordingly!