I consider the time signatures function in Dorico to be superb. Maybe not a reason to switch from another software all on its own, but quite close.

The exception are the interchangeable time signatures (v.g.: 6/8=3/4). I believe the only reason to use one of these is if one wants some bars accentuated in two beats and some in three, not necessarily at the same time in all instruments and voices. Now Dorico, being somewhat less flexible than Sibelius or Finale in the rhythmic layout of each bar (for the sake of consistency, I understand, which is normally a good thing), notates everything in the bar as if only the first time signature entered mattered at all, making for many unnecessary ties and clutter even for the simplest of rhythms.

To work around this one would have to, I suppose, although hopefully I’m wrong, correct almost every bar of music by hand, or write hidden tuplets for everything, which would defeat the purpose of the feature, in my opinion. Is there any other way to do this for now?

More importantly, any ideas if we’ll see this addressed in the future? I would love to see interchangeable time signatures as an actual feature, modifying the way we imput notes in the score rather than only a graphic to paste on when wanted.

Have you explored the flexibility of the meter popover? You can enter “6/8 + 3/4” for alternating time signatures.

Have you explored the flexibility of the meter popover? You can enter “6/8 + 3/4” for alternating time signatures.

…but that’s not what the question was about.

Bear in mind that the red signposts can be selected and Alt+clicked to any location - you don’t need to keep invoking the popover.

Also, if what you want is an Alternating time signature then make sure to enter one - Dorico will then handle the meter changes automatically.

Hi Leo, did you mean the metre in 2 and 3? When I do it it’s not automatically hidden?

Steve, I realise I used a + when I should have used a =. I’ve now corrected my previous post.

If you use 3/4 = 6/8 you should get an interchangeable meter (not an alternating one) and you should find that subsequent meter changes of 3/4 or 6/8 are automatically hidden.

Please do confirm either way - I want to be sure that I didn’t inadvertently do something else to persuade Doeico to behave like this!

I’ve just reread the OP for the third time and I realise I neglected to address an important issue: different beaming patterns in the same bars on different staves. This is where the Alt key comes in very useful! Rather than inserting a(n automatically hidden) time signature by typing Shift+M then 3/4 Enter, insert by typing Shift+M then 3/4 Alt+Enter. This way the time signature only applies to the one stave. It thus becomes utterly trivial to achieve things like the following: 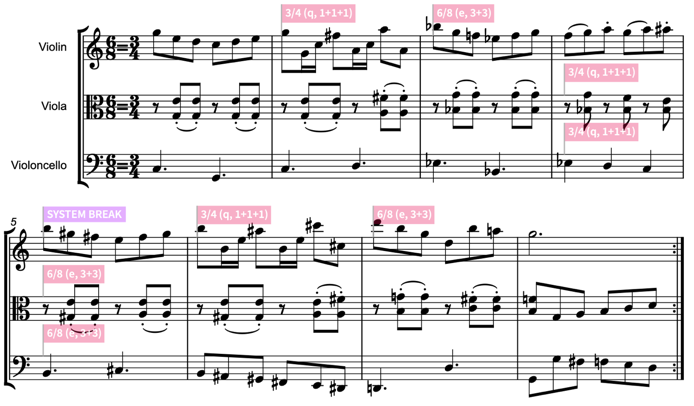 For that specific example it is even more trivial to write everything in 6/8 and use Force Duration to make the three quarter notes.

But that isn’t what the thread was about!

Ah, I didn’t know about the = in the metre popover. Very useful and flexible.

Yeah, it’s just a bit of beaming, but isn’t that what the OP was all about?

The more tools you know how to use, the better

Thank you so much, everyone, especially pianoleo. This is exactly what I was talking about, and I was not able to find it anywhere else. Time to give it a try.

I should say, though, for clarity, that I wasn’t talking about the beaming, which is on the whole easier to fix, but rather about the syncopations and forced ties when writing, for instance, three crotchets in a percieved 6/8 bar. It simplifies notation a lot to be able to do it this way, and it’s essential if you want to write in some folk dance meters (from Western South America, among others).
Thanks again!

Note that it’s taken under a week for this to make it into the documentation:

This is an awesome thread, thx Leo!
Butt saved…

Thanks for searching, Benji. 20 months later I have no recollection of how interchangeable time signatures work

But this is fantastic stuff!
And the alt key for local changes is the best, this solves everything like beat grouping and beaming and everything in one fell swoop!
Writing down the Pirates theme for a group of students, and the bass is in 6/8 while the melody is in 3/4.
No more force duration all over the place!