Is there no way to invert the phase of a send? this seems like a really useful feature that should be pretty simple to implement - I’d like to try comb filtering to create separation, and I’m surprised that Cubase doesn’t have this feature - it was requested back in version 9! 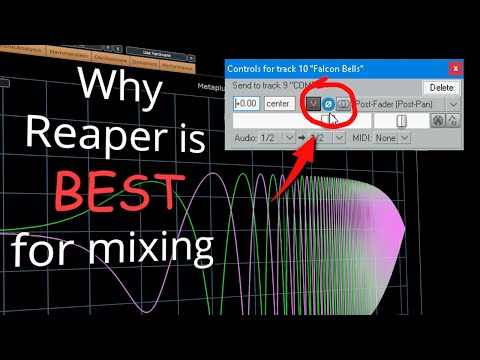 Steinberg, if you put this into 12, I’ll upgrade, there is no hope otherwise.

Watch the video and thanks for your input

st10ss - guten Tag - hopefully you’ve awakened with an open mind and watched the video, and have now seen how useful this feature might be and have learned something from an absolute master engineer. I know Dan is reaper focussed, and you’ve splashed out for Nuendo - so you must be doing this to a slightly professional level at least but just because you don’t know about a technique doesn’t mean it wouldn’t be useful to the rest of us (and you!). I’m still trying to work out why you’d make such a comment unless you were meaning to ask why the feature is important?

If you don’t have six minutes to watch the video and learn - the ability to invert the phase of a send more closely emulates a physical console - but in this case it enables a much faster workflow for making comb filters via very short delays that enable you to give space to two similar elements in your mix. Cubase pretends to emulate a console, but it doesn’t do a great job. In the video Dan explains it much better than I can - he’s a genius and you could learn a lot from him it seems. Remember, none of us know all of the techniques of mixing and engineering, even if we think we do.

Hey man,
I’m also interested in this because i’ve just watched Dan’s video !
I really encourage anyone who reads this topic to watch it, you’ll probably learn something

Hope someone can help us out !

vote for the feature, I think it’s the only way Steinberg listens - and they do - they implemented my mirror midi part request a while back

Okay I will !
I’m not used to Steinberg’s forum I admit I dont often come here for answers

where can I vote for this feature ?

There is nothing stopping you from sending one channel to a group track and inverting the phase on that track, then sending the result to your FX track. The tools are all there.

That’s a good idea as a work around, thanks Oqion. could you confirm that inverting the phase of a group channel actually inverts the phase of that channel’s send? I’ve had a brief search but I’m guessing you already know the answer.

I still think a phase button on the send would avoid messy workflows/workarounds, and couldn’t be that complex to implement

Have just confirmed this works, you have to set the send to post fader (*and have the group at zero gain) but it does add quite a lot of complexity to the mixer. track->group/invertphase->fx track (with fx off) + original signal, nulls as it should

Wow, that guy is in a different universe than the one I’m in, thanks for linking to him.

I’ve subscribed because he’s so interesting, and maybe I’ll pick something up if i think really really hard about what he’s saying!

I still think a phase button on the send would avoid messy workflows/workarounds, and couldn’t be that complex to implement

Well… messy workflow… in regard to a Reaper feature…hm.
Did you ever tried Reaper?
Easy workflow is not Reaper…

dude, are you ok?
take a break - I don’t use reaper, I’m posting on a cubase forum about a feature that would be useful to me. I’m a registered owner of cubase, I’ve tried reaper - but I know cubase. Any daw you are not using regularly is confusing, but is the reason for your negativity and weird unhelpful responses that you dislike reaper? - if it is, then go post on their forum.

BTW - inverting the phase of a send isn’t a reaper feature - it’s a console feature that isn’t in cubase. reaper just does this particular thing better than cubase

Any daw you are not using regularly is confusing, but is the reason for your negativity and weird unhelpful responses that you dislike reaper?

Reaper is a beast on its own… that’s all I’m saying.
It’s quick and lightweight on recording, but editing and mixing is another story.

Which console? I don’t know any with this feature.

Which console? I don’t know any with this feature.

SOS Technical Editor Hugh Robjohns replies : Yes, the aux outputs are commonly inverted on many budget mixers as a deliberate design ‘feature’, the most likely reason being to save on manufacturing costs. As the aux outputs are impedance-balanced types (with all the signal on the ‘hot’ line and the ground-reference on the ‘cold’), correcting the polarity at each Aux output would require an additional inverting op-amp, along with all its supporting circuitry, in the signal path. That would take extra space on the PCB, and while it would only cost pennies to add the extra components, these decisions all add up and cut into the profit margin that makes such devices commercially viable in the first place.

The designers will, I assume, have felt that it was a relatively harmless trade-off, because having an inverted polarity at the aux output makes little, if any, difference to most applications and most people using a budget mixer of this type. It can cause issues in some specific situations, of course, and it’s sometimes easier to address the issue by reversing the polarity of the effects returns, rather than the aux sends.

So in many cases you might not have seen the button. In the case of the analogue world, you can invert phase at the patch bay, or by using inverted balanced cables - even if the button doesn’t exist on any of the limited number of aux sends you’ve seen.

TBH… a reversed output is not a phase reverse button, you can’t switch the output to normal phase in these cases. These outputs are unbalanced anyway.
And it still has nothing in common with your feature request.
Your feature request implies a button on every send.

So in many cases you might not have seen the button. In the case of the analogue world, you can invert phase at the patch bay, or by using inverted balanced cables - even if the button doesn’t exist on any of the limited number of aux sends you’ve seen.

This is not a phase reverse button in the console either.
And I’m aware of the possible workarounds. But this works with balanced lines only.

Not on the mentioned consoles from the SOS article. These have unbalanced aux outputs.

I still own some phase reverse adapters.

This is not a phase reverse button in the console either.
And I’m aware of the possible workarounds. But this works with balanced lines only.

Agreed - but I can’t de-solder cables in cubase, nor can I easily emulate the patch bay that would be a part of any analogue mixer setup that you or I would use… I recognise that neither of us is just starting out here, neither of us are messing about with unbalanced cables (much to my wallet’s regret) for our physical connections - but this conversation serves to keep my post at the top of the forum legitimately so I’m happy to engage… all I want is a little button called phase invert on my sends - it’s a feature that could only add to cubase, and I’d much rather have what should be considered basic mixing tools from the analogue world than yet another crap DJ-style filter steinberg plugin. I don’t think I’m being unreasonable. they could re-use the code from all of the other phase reverse buttons on this “emulation” of a physical console - that really is just an emulation in looks alone =)

but I think now at least why it could be of use to a fool like me?

No patchbay used on my setups since 10 years now….

That’s what you say… I don’t call you a fool.