Is support actually a thing at Steinberg?

It appears from my experience at present and from searching that Steinberg seems to ignore support requests quite frequently.

You spend money, get an issue and in return get ignored. Is Steinberg’s support policy to ignore people in the hopes that they go away?

If you keep customers in the loop, you’ll stop people complaining.

In fact, if this isn’t sorted out before Xmas I am going to post a review to my 35k subs on YT, so at least they can put their money elsewhere.

I’m not sure I’ve ever had any meaningful technical support from the official (MySteinberg) channels. And most of the tickets have been ignored, given irrelevant replies or left open for years - or worse still, silently closed.

I have some (a tiny bit!) of sympathy in that a million different setups are hard to support but as you say ‘ignoring’ isn’t a reasonable support policy.

Incidentally, I’m not convinced that it’s a reason to ‘put your money elsewhere’ as the ‘elsewhere’ probably also has terrible support.

- suffice to say, decent communication would be a good start.

I wouldn’t mind if I had a little bug that I could work around, but the issue is with a license which isn’t correct for my product. Despite double checking I clicked the right product, I was still sent a license for the incorrect version.

I’ve requested a refund now via Living C, I don’t expect it to actually happen, but if I get no reply I’ll write to Andreas Stelling and if I still get no resolution I’ll report it as fraudulent transaction to my bank and supply all relevant evidence and get a resolution that way. I’m definitely not going to give up until I get it resolved.

You spend money, get an issue and in return get ignored. Is Steinberg’s support policy to ignore people in the hopes that they go away?

Of course not. But at least the customer should write to the correct place, which you say you did, eventually. Since the issue was with a purchase, Level C or Asknet is the right place.

well yes, but (at least in the UK) you buy from:

The confirmation and invoice emails come from “The Steinberg Shop”

As you say it turns out that’s either “Asknet” or “support-living-c” (who knows which!?) - and not Steinberg, despite it being , very clearly called Steinberg.

So you can understand this might lead to some confusion amongst the customers? - so maybe, just maybe, Steinberg support have a responsibility to at least attempt to help ?

As I say, lots that Steinberg could do - but they seem to not be too worried about it.

The support page is clear. It’s also clear there which company should be contacted. Also, the email receipt displays the name of the seller. 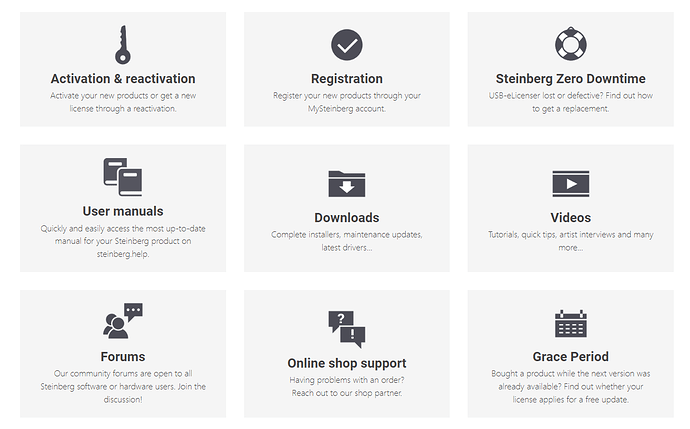 As you say it turns out that’s either “Asknet” or “support-living-c” (who knows which!?) - and not Steinberg, despite it being , very clearly called Steinberg.

This is a common thing with many internet websites, who need a shop system. Beside asknet you typically find myCommerce or DigitalRiver behind Internet shops. You can see who the billing and accounting is doing when the mail containing the bill arrives.

So this is nothing that Steinberg does differently to other sites.