When importing audio files to an existing project with other previous audio files, the newly imported files are saved in a new separate folder.

All previous project content is saved in a subfolder named “Rep” folder and audio files in the “audio/Gig” subfolder, but newly imported files are stored in “audio/Gig” folder directly under “VST Live projects” folder.

Why is that?
Can I see or change default folder for project content in any way? 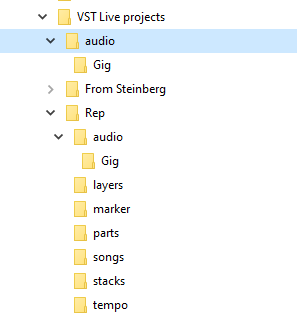 And what should happen when I delete Audio tracks with audio files, should the associated audio files in folders also be removed?

After trying out deleting, re-importing and deleting again it looks like the audio files are still stored in the content folders, even though they are not used by any project!

Hi,
I observed a similar behaviour (I don’t know if you have used the same process but the result looks more or less similar) :

I think it looks like a bug.
Thanks in advance

I think that if you save all projects under the same main folder all audio files will be stored in the same audio/gig folder under that Main folder.

In my case I think this was a result of me deciding to use subfolders for different types of projects, so I moved exisiting projects into a subfolder, and when importing new audio files the project still points to the old original main folder and put the new files there.

Just a thought…bt I will try this out a little bit more.