keyboard shortcuts in the midi editor

Hello!
Why is not possible to assign keyboard shortcuts to the commands of the icons in the left of the top menu bar of midi editor? Commands like “Editor in solo mode”, “Rec in editor”, “Acoustic feedback” are some of this!

I know solo is there as well as rec in editor, not sure on acoustic feedback.

Yes, and no keyboard shortcuts for them?

I’m saying there are keyboard shortcuts for everything but feedback

I’m saying there are keyboard shortcuts for everything but feedback

I’m trying to collect a list of missing KCs. Also a list of tool tips that don’t match the named KC.

To my knowlede, Feedback is missing. There are a lot more.

Also, as mentioned in the other current KC post IMO the whole KC needs to be updated. The search method is outdated. There needs to be an indication of what windows any given KC is applicable. This is especially important since C7.

agreed, a key command overhaul is necessary as well as a fix for how they passthru based on zone selected and which window has focus (arrange vs mixconsole vs editors) This has been a long standing problem since the mixconsole was introduced. For those of us who try NOT to use a mouse, it is very problematic.

you are surely mistaken as both of them are there. Solo is just using the solo shortcut while the editor has focus. You obviously haven’t searched the keycommands because the others are there too … .just not feedback. 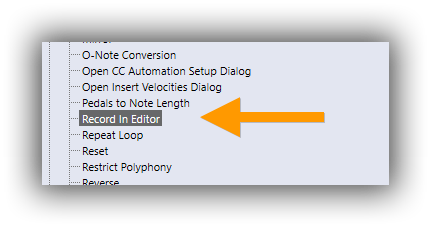 Yes, I’m sorry! I found “Record in Editor” (in italian, my language, is “Registrazione nell’ Editor”.
But I still can’t find the Editor in Solo mode’s key command.
I will give a look better
Thank you guys!

I already explained that solo is the same command. It is focus dependent. It should be S