Kontakt Script Note Off not recognized by Cubase?

I believe I have a problem with MIDI note build-up in Cubase. I am using note_offs for some MIDI notes in a Kontakt script. Cubase’s “MIDI Monitor” (not the Kontakt script utility) never reports this note_off. Instead, when the same note is replayed, the Cubase MIDI Monitor gives the note a comment in red: “Overlapping Pitch”. It appears the MIDI note still exists in the Cubase system and contributes to a build-up that is causing performance problems. Any suggestions how to avoid this would be very much appreciated. !

I believe Cubase recognizes Note_On with value zero for this.

In the Kontakt script I have used both:

Both versions causes the notice about overlapping pitch in MIDI Monitor, and the problem with overload persists.

I have also tried using play_note($a_note,0,0,0) which generates a Note_On with velocity value zero. Cubase won’t see this either.

Here’s a screenshot illustrating the problem. Playing the note D2 repeatedly triggers the note G8 from the VST3. In Kontakt’s MIDI Monitor to the right one can see that each G8 Note On receives a Note Off. In Cubase’s MIDI Monitor to the left only the G8 Note Ons are reported with a warning about overlapping notes. This scenario brakes Cubase’s Audio Performance and the meter goes in the red, the audio breaks up and notes hang. 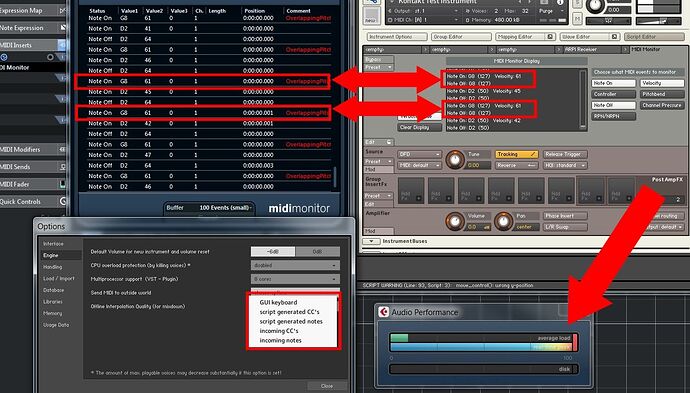 NoteOff is not working in midi-remote, it might be related?

The problem was solved by sending a Note_On with velocity zero from the plugin.