I have the sound coming out of my Laptop’s Headphone jack-- which is a 3.5mm SPDIF according to the spec shet here: http://www.asus.com/Notebooks_Ultrabooks/ASUS_ROG_G750JH/specifications/ & going into the UR28M. My laptop asks if I’m plugging in headphones or speakers when i plug something in.

The problem is I’m not sure I am using the correct wire & I’m pretty sure I’m not communicating to the folks down at Guitar Center correctly on what I need/want.

The first wire they sold me was a 3.5mm to XLR & I didn’t get any game sound through my headphones unless the Mic (which requires phantom power) wasn’t plugged in-- actually I didn’t get the mic & game sounds to work at the same time with both plugged into XLR ports, if I remember correctly, but I took that back and…

I’m streaming & basically need all the sound from my laptop to go through the UR28M & then come through my headset & be in stereo…should the wire be a 3.5MM to a single 1/4" plug? Or should it be going to the S/PDIF In on the back of the UR28M?

The UR28M connects to the Laptop via USB2 !
The driver and Tools supplied with the unit need to be installed, then updated as required - following the instructions given.

Sorry, I may not have been clear in that you are correct the UR28M does connect to ‘A’ computer via USB…output. I’m inputting sound from a laptop’s 3.5mm into the UR28M & then sending the sound out of the UR28M to a 2nd computer which is running the software (which is updated).

Then you need a 1/8" (3.5mm) TRS (Tip Ring Sleeve), or simply a mini-stereo jack plugged into the Laptop to 2 1/4" TS or mono jacks plugging into typically Ins 3 and 4. This won’t be heard in the Phones 1, but can be heard in Phones 2 if you set the Phone 2 source properly in the Control Panel or DSPMixFX (whichever you’re using.

I believe I have the correct cable, however when watching the Level Meter of the Channel Area (Yes, I had to look those terms up in the user manual for the DPSMixFX) when playing a left to right sound test both Level Meters are showing the same activity.

Cable from Laptop to UR28M

The back of my UR28M

When playing a left/right sound test this is what DSPMixFX looks like…I would expect it to only show sound on one Level Meter at a time i.e. Left or Right. I also hear it in both ears. 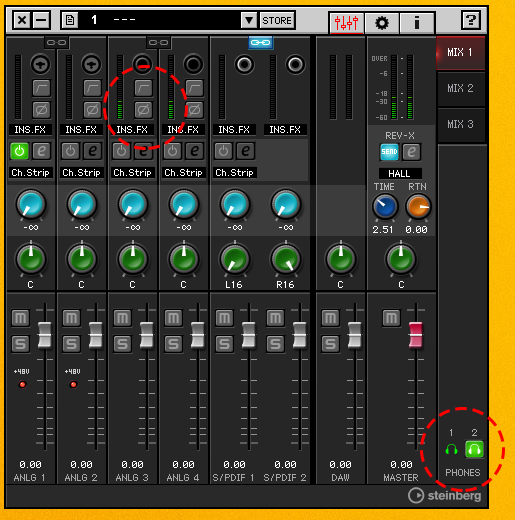 Thank you for your patience as this is truly uncharted territory for me-- first mic, interface (mixer) etc.

Anyone else find it strange that the “headphone out” jack is S/ PDIF? This would mean that the cable is sending an encoded digital signal that would require decoding by the receiving device!

If the Jack is truly outputting S/PDIF, then it must go into a S/PDIF input on an interface.

Is there some way in the laptop audio settings to switch the headphone jack from S/PDIF mode to straight stereo audio?

As I understand it the port is both with the standard 3.5mm jack & an LED at the end & the laptop knows which type of plug is inserted.

I linked the original laptop specifications in my first post from the manufacturer’s website which lists it as: 1 x headphone out jack (SPDIF).

Strange it may be, but it was my Christmas present to myself last year & was a very big one for me (much like the UR28M) …it does have some nice stuff packed inside (again, like the UR28M).

Then I would think that the cable you have is not wired correctly. Tip should = Left and Ring should = Right (if memory serves). I assume by, “center,” the manufacturer meant “ring”? But obviously the same signal is going to both inputs through that y-cable. I’d try another cable.
BTW: Is it the left channel that’s showing up at both?
When you plug in headphones straight into the laptop, is it stereo?

Not familiar with the DSPMixFX—but is there any chance that panning those input channels would help? Or the inputs/outputs from the UR?

I believe the headphone jack is indeed S/PDIF capable, however I also believe this is a setting in the Laptops audio device manager - removing the “digital” checkbox. I’m not exactly sure what kind of cable you’d need to connect via s/pdif, perhaps a mono mini jack to an RCA Phono jack. I have my s/pdif ins and outs connected to discreet converters in my setup (http://www.conrad.ch/ce/de/product/989149/SpeaKa-Audio-Konverter-Digital-zu-Analog?queryFromSuggest=true.)
Your cabling seems right and if you can defeat the digital setting as above described, it should work. You might also want to link the two inputs together into a proper stereo pair, and then pan left and right as enjneer suggested.

And the winner is enjneer!

(Actually, a BIG thank you to both of you!)

After 3 hours of tinkering with different configurations, composing a 367 word response of the steps I had taken & using a different laptop to test with the same results it turned out to be one of those cases where the simplest answer was the best & the last one I tried (meaning I went through all your other suggestions first, except ordering the 3.5mm SPDIF cable & waiting for it to arrive), but it was this:

Not familiar with the DSPMixFX—but is there any chance that panning those input channels would help? Or the inputs/outputs from the UR?

By turning the Left to L16 & the Right to R16 I’m hearing stereo in the headphones. I was sure I had turned all knobs etc, but I can’t thank you all enough!

I’m not positively sure what you meant, BriHar, by

You might also want to link the two inputs together into a proper stereo pair, and then pan left and right as enjneer suggested. 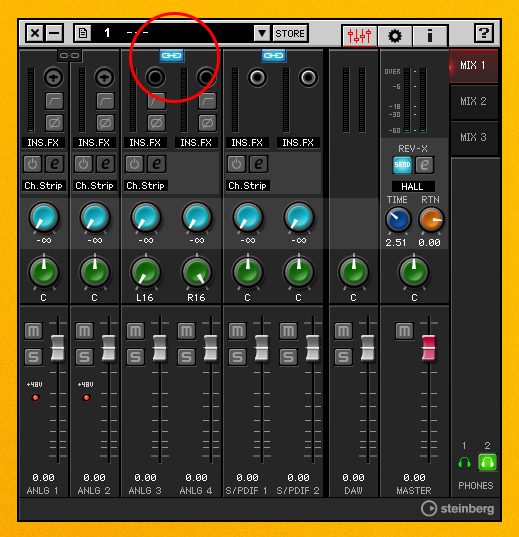 Again, thank you so very much!

And the winner is enjneer!

Seriously, it’s a pleasure… I can help out every now and then, cos I’ve (hopefully) seen it all, when it comes to chasing down missing signals… and noise … and patching and quiet signal and ground hums and busted cables and bad operating systems and failed hard drives and… and…

Well, you get the picture.

By turning the Left to L16 & the Right to R16 I’m hearing stereo in the headphones. I was sure I had turned all knobs etc, but I can’t thank you all enough!

Is “16” fully left and right? You want them “hard-panned,” i.e., The left pan pot turned all the way to the left, and, of course, the opposite on the right.

Glad you got it sorted, you understood the linking correctly.
16 seems to be the right value in DSPMixFX.

Now I’m running down the next problem which is why my other software program running on the same machine as the DSPMixFX picks up the Mic, but not he Game sound which is what was fixed for me even though they both come in via the USB 2.0 cable from the UR28M.

Ok…now it is a few hours later & I’ve come to a slight work around …actually, strike that. I have it solved now to where the 2nd machine gets what it wants (which is what was solved here) & I get independent control in my phones of the Mic & Game sound separate from the 2nd piece of software (Open Broadcasting Software) on the machine running DSPMixFX.