Hey, am sorry for the many questions, but the manual is really bad and does not really help.
It is really strange that basic words are not appearing in the manual…

so I have 4 questions:

How do I get slashes into the Leadshhet mode??? Like f.e. in this picture:
https://www.gitarre-lernen-online-kurse.de/leadsheet/

In this video it is not shown, but its is a very basic thing isn’t it?
https://www.youtube.com/watch?v=NPkpU7HLPwo


Really a bit non intuitive or? I come from Logic , which is a really horrible score Software, but obviously much Moore flexible… you can just grab a symbol an move it around … with Dorico it follows strange rules or is hidden under a lot of other menus and parameters…

getting much slower than with logic…

I am sorry but I don’t get a word of what you write.
My modes are:

which one is “Engrave mode”?

what are these:
“Make Into System” and “Make Into Frame” buttons ? Are there any tutorials where this is shown? The manual leads nowhere and also this basic description is maybe for very used users.
The second answer does not help because the grid does not lead “outside” the system, where normally Verse and Refrain terms are placed. 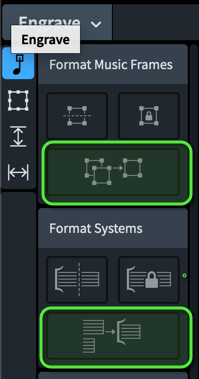 I’m afraid my German is nowhere near good enough to explain all of this in German, and I can’t point you to the right place in the German manual or tutorials either. Hopefully someone with better German will turn up soon!

Sorry not your fault with German

) but isn’t there any step by step explanation for this???

Which button does what… ???

Thank you, I know these things but they don’t really help.
To movie a bar put to have a proper Layout is that complicated, that it takes much mire time than in such a bad Notaionsoftwre as in Logic. That is a real bad surprise. I heard from other musicians that Dorico is really hard work, but when edited an imported viola Piece it was quiet easy. To do a simple Leadsheet ist incredible complicated.
And again: the manual implemented in (the German ???) Version is absolutely useless.
Maybe I have to sell it again.
I am sitting now for 3 (!!!) hours to get this working, in logic it takes 30 minutes…
Bye

It really doesn’t take terribly long to place System Breaks where you want them, once you know how to do it. It’s sometimes quicker to add a Note Spacing Change, as shown here: https://steinberg.help/dorico_pro/v2/de/dorico/topics/engrave_mode/engrave_mode_note_spacing_change_dialog_r.html?hl=note%2Cspacing%2Cchange

As to spending three hours, there are two distinct issues here:

This is just frustrating

and sorry but this is for space between notes not replacing bars is it?

You’re not the first user that has tried to just figure it out without asking for help. But that’s why we’re here!

There are several German users here, and some team members. Someone will doubtless chime in soon.

Leo’s point (I assume) was that note spacing is often a better solution, since Dorico will fix the casting off automatically.

I do absolutely not agree in this. It means a non complicated and led by Intuition and logical development of solutions process of working.
I don’t at all expect Dorico work as logic. Because logic is an awful Notationsiftware. That’s why I am here !!!
I looked several Youtube tutorials, tried to find things in the Dorico help in the program (pure horror) and in the Dorico manual. But its is just for Windows (takes ages to find the SCs for Mac) and there are hardly processes explained just “results” of east things do. Not How to work with them. (like here f.e.
https://www.youtube.com/watch?v=0HbY8nZzrOw
)
I know I ma a beginner , but just with Dorico, not with DAWs etc in general And for such a self-hyped program like Dorico I really expected a better way of having a chance to learn it.

Leo’s point (I assume) was that note spacing is often a better solution, since Dorico will fix the casting off automatically.

That was absolutely my point. If you get Note Spacing right, globally, there’s often very little need to insert System Breaks manually. Lead sheets are perhaps an exception because the casting off may be influenced by phrasing more than the actual notes.

gogollny, have you resolved the question at hand?

Don’t be disheartened that it takes time to learn this stuff.

Not at all, I am disheartened because there is no proper way to learn it because of the not properly working manuals f.e.

I don’t know, maybe we talk about different things. M<y lead sheets need different numbers of bars in system, 6, 5, 8, 8, 8 and than again 7 maybe with house 1 house 2 numbers and all that. This can’t be generally formatted and been recognized by a software.
And this is wright: I am used to make a formatting as a process of lay outing a sheet. because for the musicians it is absolutely important to read it as easily as possible by f.e. having 15 to learn a song.
But the way to get there is not what I am used to.

“have you resolved the questions at hand?”

Non of them, just returned to logic…

“have you resolved the questions at hand?”

Non of them, just returned to logic…

That’s fine, except you said it was awful. If you want help, plenty of users are here to help you.

“plenty of users are here to help you.”

Thanx, I asked my questions already that I need help for, but as I said the general answers by pianoleo didn’t help. I need a more precise help, not just a general hint like “this works with frames”.

Maybe thats asked too much but than that’s it.

As I said before, the XML editing of the vital piece I wrote was my 1.try and surprisingly makable, it was quiet clear and the problems could be solved by a little help from here and youtube.
But maybe Dorico is not the wright software for lead sheets, more for classical music. Than I have to accept that.

PS and logic is really awful for Notation. It always looks a bit “unprofessional”. Thats why I bought Dorico.
But didn’t expect not to find solutions by using the “normal” helps like Youtube, Manual, and forums