Little problem with cross-staff and beams

I have an issue with cross-staff notes and their beams.

For some odd reason, when I try to move two notes from a group of beamed notes into the upper staff of a piano grand staff, the stems remain all in the same direction (up stem, in my example).

I would like the first note of the circled group to be up-stem, a centered beam, and the next two notes be down-stem in the upper staff.

There is already material (voice 1) in the upper staff, and there are held notes in the lower staff (voice 1, downstem).

is the fact that they are all considered “voice 1” the issue? 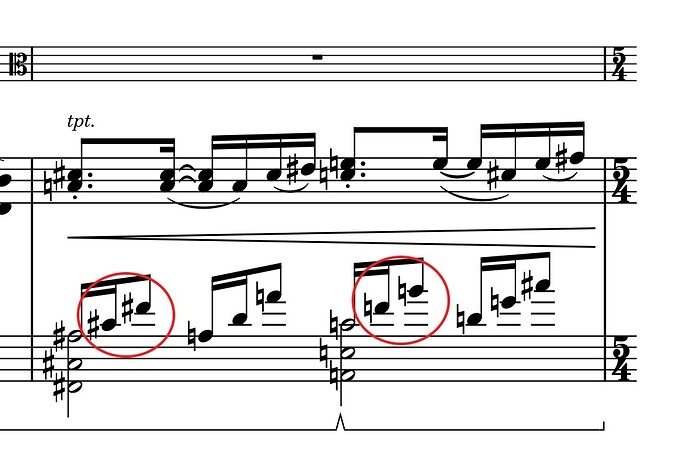 I didn’t clean this up horizontally, but by selecting the individual notes in L.H. voice 1 and pressing N to switch them to the upper staff, I think I ended up with what you were looking for. 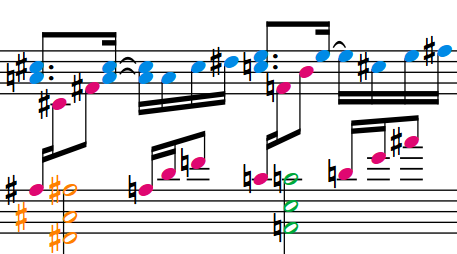 that was exactly what I did as well, selected the notes I wanted to cross-staff, then pressed N.
for some odd reason, it just sent the beams up into the other staff, stem up, coming in radical conflict with the already present beams in the upper staff.

I ended up deleting and starting that measure over again, but this time I put the notes that I wanted cross-staff in the upper staff and moved them down. THAT worked.

Yes, it’s possible to get all mixed up between N/M and Alt-N/M, to the point that it can’t really be sorted out. I’ve encountered that, and the only solution is to delete and re-enter those.

however I WAS only pressing N, not alt+N.
of this I am positive, since I’m still insecure with Dorico’s commands, I tend to keep a little notebook open with my notes on how to achieve certain results. Either that or the actual Dorico help file opened to the appropriate topic.

what it was giving me was:
1st beat, the 2nd and 3rd notes (C#, F#) in the upper voice in the left hand were getting moved up, properly into the right hand staff, however, the stems were remaining up-stem as well, so I had a humongous long stem for the A#, and the beam was interfering with the beam of the right hand part.

If your notes had a Stems-Up property set (via an import or some other means) this could very well happen. (I suspect Gremlins were at work.)

it truly is… a puzzlement.

the file was an original Dorico file, I have yet to actually try to import anything. The one time I tried it was an unmitigated disaster.

but as I said, it has been resolved even if we may never know why the specific behaviour was occurring.

You can reset notes that may have been cross-stave-d at some point, which removes any cross-staff settings from them.

Resetting notes crossed to other staves

You can reset notes that have been crossed to other staves so that they appear on their default staff. We recommend resetting cross-staff notes before copying and pasting them to other staves to avoid unexpected beaming.

Resetting stem directions if you’re experiencing unexpected ones can also be handy, @Michel_Edward –

You can remove changes to the directions of stems and revert stems to their default directions.

Likewise, you can change their voice once they belong to the correct staff if needed, to make sure they’re in the same voice as surrounding notes (“voice tidyup”).