Hello! I have a question about audio sends. When I have a sampler track with a clap for example and send it to fx track with reverb effect. When I activate send in Audio Sends field, without changing the send gain, the clap sounds noticeably louder. When you put the same reverb effect in the Audio Inserts field (sampler track), nothing like that happens. Maybe it’s a simple thing, but I don’t understand why this is happening … Thank You!

That is actually expected. When you activate a send your are conducting signal in a parallel path to the FX channel. Later, when you mix the original track with the FX channel you are getting the addition of two signals and you need to balance it properly for what you need. When you put the reverb as insert in the same channel you don’t have a parallel patch. But you can adjust the mix knob in the reverb self, and this controls the balance between original and processed signal. It is a kind of parallel processing indeed, but the mix knob sumes 100%, balancing how much % of original versus % of processed goes out. Advantage of an FX channel is that you can have one FX where you send several signals and have more control over the whole processing: you could have a delay, eq, compressor and reverb in an FX channel and you handle the signal just as a 100% wet. But an insert in original channel is simpler for simpler things. It depends on workflow and what you need.

My guess is that the reverb in the FX bus is not set to “100% Wet” mix.
Or, if it is, that it still has some amount of “sound through” in the response.

Yes, you are right, that can be too. So he would be hearing more dry sound, what is more noticeable than hearing the original dry plus the 100% wet.

Thank you for your help, gentlemen! I will try to analyze and understand it.

When analyzing the signal path, actually after sending any signal to the FX channel, the output is visible in the plug or sampler channel settings. Each time there are 2 targets visible (there may be more, but I’m talking about one effect on which the signal is sent). And now when I switch to only the FX send send everything is fine. The signal does not go parallel to the main output and the FX path. Now I have a question, is it possible to change somewhere in the settings so that when creating an FX track for a given track, it is immediately set so that the signal goes only to the FX track and not parallel to the main output?

I don’t know of an option to do that. What I do in these cases is to click “routing” at the top, and send the channel to that FX track, and not use the “Sends” at all.

Another option is to create a “Bus” channel for the track, and then configure your reverb or other effect an insert on the bus. E g, when you create a Bus, the track is automatically routed to the bus; then as a second step you click Insert and select the effect/s you want on this bus. The benefit of doing this, rather than just using inserts on the original track, is that you can send more than one track to the same bus to combine with the same effect, which is helpful for reverbs, but also other things like multiband compressors or side chains.

Thanks jwatte! Tell me where is the routing you’re talking about?

I guess too you are talking about routing. The routing jwatte mentions is the normal output routing almost every channel has. Here for example for a guitar going into a group channel called G Accs:

Now, to the FX tracks and group channels: when you are in the mix console and

You get a new FX track where your original track are SENT to (in rack sends you see that).

You get a new Group channel where your original track are ROUTED to (in rack routing you see that).

BUT: if you want, you can SEND signal to a Group and you can also ROUTE a track to an FX track. That means, you can use groups or FX track to the same things. But, as said above, what happens as default when you create them, is different, but you can change it, for example you can turn off a sending to an FX or turn off a routing to a group channel.

I personally prefer to work with FX tracks for FX and Group channels for grouping (as the name tells). But you could work only with groups to do sending and/or routing.

Maybe this video can help a little, too: 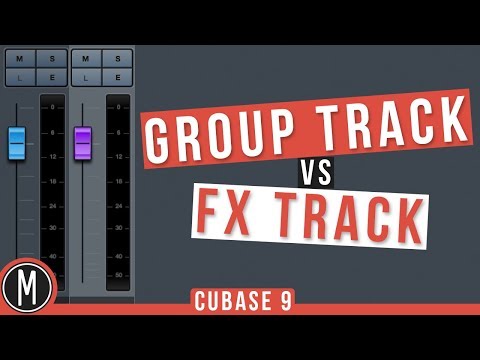 Thank you very much Knopf

I watched this episode, and one more https://www.youtube.com/watch?v=2sndoF2QMZE&t=313s (07:10) and everything is correct. Now what is the purpose of the parallel signal in the FX path? In the group track, the whole signal goes where you point it, while in the FX track only part of the signal. What is the purpose and meaning of this? Why is this useful for effects like delay and reverb?

There are cases where you want multiple inputs to a single effect.

In old-school studios, you might only have one or two physical reverb units (those guys were EXPENSIVE!) and you’d have a “send” knob on the mixer that sent some signal to the reverb; the reverb did its thing to the sum of all things sent to it.

Reverb instances these days aren’t expensive, but they do suck down the CPU, plus the sound sounds more cohesive if all sources with reverb use the same reverb. For some genres, this is important. (For other genres, that’s more like a draw-back

) Anyway in that case, you typically make the effect (on the FX track) be 100% Wet, only adding the effect bits, and then send as much signal to it as you deem necessary, from each signal that needs the processing.

Groups are used more for when things “go together” not mainly because of effects, but because of mixing/volume. If you separately mic each player in a section (brass, wind, backing vocals, all drums in a drum kit, etc) then you’ll typically make each mic be a channel, then route channels to one bus per section, and finally mix those groups to the main out. This makes it easier to “bring down the strings a bit,” or “do mute automation on the drums” – turn one knob, not 22 separate knobs, which would have to be turned in parallel.

I can add following to what jwatte already told you: