how can i correct a forgotten hyphen in the lyrics input, so that all subsequent text shifts to the right?

If it’s just adding a missing hyphen between existing syllables, double click on the first syllable, and you’ll get the popover. Just press the hyphen key and you’re done.
If you want to shift lyrics, you can select the lyrics (and nothing else) and use Alt-right arrow (or left arrow) to move it. The lyrics will move according to the Write mode note duration grid value thingy.

Alt + arrows moves everything in Dorico.

Hi,
this is not exactly what i mean.
If i do it the way you describe, then i get that hyphen at the end, no matter where i put it in the word.

i.e. I typed “Saru-man” and 10 words later i see, ups all the lyrics are misplaced, i forgot to enter one syllable, resp. hyphen.
If i now go to “Saru-” willing to enter the missing hyphen (to Sa-ru-") it is not possible and there seems to be no way, that everything shifts automatically to the right.

Then select all the lyrics that need to moved; move them; and then add the additional syllable. You can edit the first syllable by double-clicking.

I fear it won’t be that easy as lyrics are not always moved to the correct next note, even when copying them via copy paste. I had such problems wirkt tuplets.

how can i correct a forgotten hyphen in the lyrics input, so that all subsequent text shifts to the right?

IF you have a completely boring rhythm, it’s a simple case of selecting and filtering the lyrics to the right of the mistake, nudging them right (either by using Alt+arrows or by cutting and pasting), then selecting the word that needs a hyphen, overtyping the first syllable, hitting hyphen and typing the second syllable in the right place.

However, if this is a real world scenario where the rhythm changes, there is no automatic way of doing this in Dorico. You can attempt to cut and paste syllables into the right places, but it might be quicker to redo it from scratch.

A to B is no problem, because the rhythm is consistent.
C to D is problematic, because each lyric has a duration that is set when the lyric is first typed. In this example, “that” has a fixed duration of a 16th/semiquaver. When you move it to a note that lasts an 8th/quaver, the next syllable moves forward. 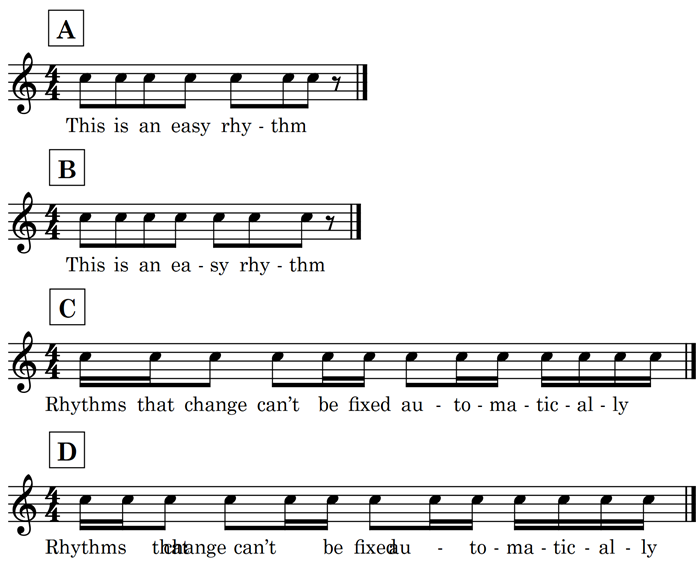 Wow, this whole complex seems to me almost like an issue that has to be intelligently solved…
Dorico is so smart in every other way, looking ahead, e.g. assuming system breaks; with its thousands of small algorhythms this is rather a missing feature or a bug…

This title was correct for what I’m experiencing: hyphens missing for words on the far side of a repeat structure. I have the “-ia” of alleluia in the first measure of a second ending and the hyphens are missing even after I deliberately make then an “end” syllable.

Romanos, it could be argued that a hyphen before the “ia” in the second time bar would be inconsistent and thus incorrect, if you bear in mind that there is no hyphen in the first time bar. It’s actually before the barline. Look: 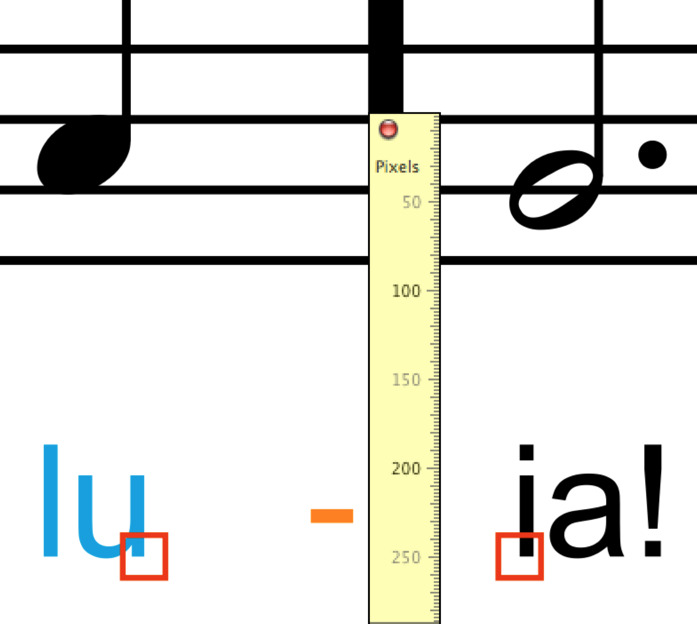 On the other hand, you could always workaround it by doing the following: 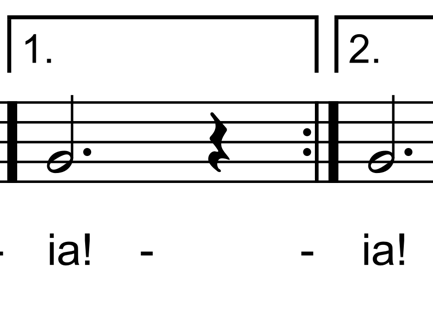 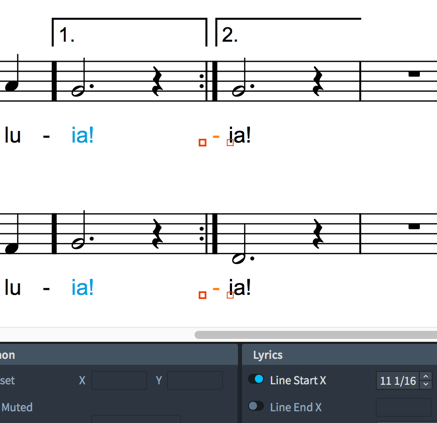 Note that you can adjust more than one of these at a time, and (presumably) you’ll need to do this in each layout separately or take advantage of the new Propagate Properties tool.

I didn’t think of adding a false hyphen between the two ia’s and moving it. That said, this does need to be accounted for by Dorico as it is no doubt very common. I agree that a hyphen floating in the middle like your first pic doesn’t look right, but in this case it is correct to take the hyphen and tuck it close to the second instance.

Dorico does not in general account for things that need to be restated at the start of a repeated section, or at the end of a section that is about to jump back somewhere else, or at the start of an nth-time ending. These things will not be part of the repeat marker functionality that is coming in the next large update, but they are planned.