I just got this old Mac Pro 2010 off Ebay and upgraded it with an NVME drive, and an RX 580 graphics card.
The thing runs smoothly.
I’ve never run Cubase on this machine before so I have nothing to compare it to.
So I just started testing one little project, adding a CPU-heavy plugin (El Rey) over and over again to see what my system could handle.
Something is wrong.
4 instances of the plugin and the average load is 60%
Real time peaks is at like 95%.
If I turn on a 5th El Rey, then the audio drops out.
CPU load is extremely low, however, as you’d expect… running at just over 100% (max is 2400% since there are 12 cores, 24 threads)
Buffer is set to 512.
Any thoughts? 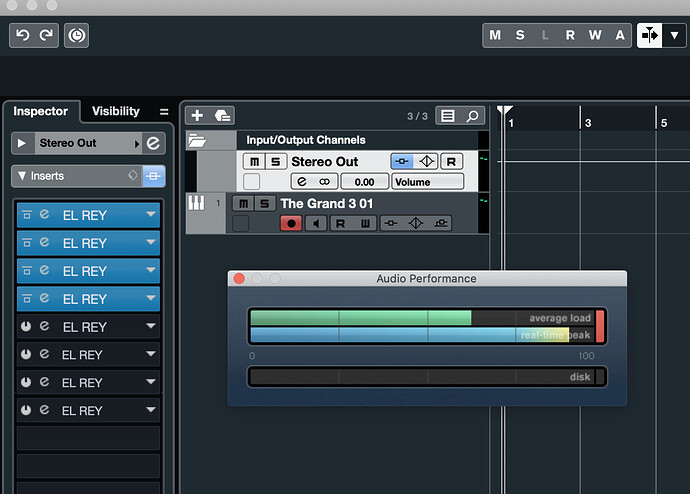 I get this with 1 VSTi running Addictive keys, nothing else running but that.

Next update for Cubase is supposed to address the CPU hit, we shall see

BTW, do you have an EXACT link to the RX580 you bought? time for me to move to Mojave here. Thanks

wow… thx for that info.

Also, running El Rey, multiple instances on the same track… (at least in Logic) causes just the 1 thread being used by that particular track to spike. So, at least in Logic, it’s best to balance your processing load over different tracks (which is what we normally do). And I could see that balancing helped some in both Logic and Cubase.

Still, I don’t understand how the Audio Performance meter and my CPU meter are so different.
(I guess this multi-core/threaded thing is overrated, huh?)
THAT this is so confusing is a problem with Cubase. The system monitoring in Logic is really, really clear. I can see all 24 threads of my CPU processing and exactly what is happening. For instance, I could see that loading Ozone actually just taxed one thread - so it appears that it’s not written for multi-threading… which sucks since it would be nice to test out possible mastering scenarios while running the multitrack.

thanks. yea, better to use El Rey in offline processing.
Here’s an idea how hungry El Rey is:
I opened up a demo project that comes with Logic, with tons of tracks and processing - TONS… and my CPU load was basically balanced over the 24 threads at roughly 25%. Adding 1 instance of El Rey causes 14 of those 24 threads to jump to around 50% - which is over 50% more CPU use from what the project had been running at. After adding 5 instances of El Rey on that same track, the project ground to a halt… (This all done at about 512 buffer, so I could have gotten one or two more El Reys with a 2048 buffer - and of course, like I said above, even more El Reys if I had spread them around the multitrack.)