Metering issues in 12 pro. Also how do I see input clipping?

I’m struggling with the metering in Cubase 12 pro.

Note I do have the preferences set so the meters should show inputs:

You monitor input level peaks whatever hardware/interface you are using.

very simplistically - Cubase can only monitor what the interface is putting out digitally - this won’t go over 0db so Cubase has no idea if the level on the (hardware) input went over this.

Clipping typically occurs in the audio hardware when an analog signal is too loud and therefore converted to digital in the A/D converters of the hardware.

If you make sure that you treat -12db as zero and you shouldn’t have too many problems - just don’t rely on the red ‘over’ indicator working on an input signal.

You cannot change the scale for the tracks in the mix console. It is always a digital peak meter.
And you need to select the correct scale in the dropdown menu to configure the colors for it, namely “+3dB Digital (Channel meter)”.

You don’t see a clipping indicator on regular tracks and busses, because you cannot really “clip” the Cubase mix engine, technically speaking. The signal can go above 0dBFS of course, but it doesn’t clip. You can of course have a look at the meter peak level (the little number at the bottom right to the level value) to check whether it is above 0, just to be sure.

I don’t see any way to see a clipping indicator on a track other than the output stereo bus.

Strange. I have such indicator also on the Input Channels…

do you have any eq/gain/fx on the input channel ?

So I am satisfied.
Please don’t ask me why I have a guitar on my mic channel…

Why do you have a guitar on your mic channel?

Your TotalMix looks very different than mine, actually… and I see no option with mine to set any picture for the channel.

Well, f*** me… I learned something today!

that’s a pretty old version of totalmix (?) - but the DAW option is still there in the latest

So I am satisfied.
Please don’t ask me why I have a guitar on my mic channel…

So you mean that RME TotalMix is somehow sending clip information to Cubase, and Cubase actually recognizes such information? So it depends on your interface driver?

Do any other interface models have this kind of operational mode thing?

You monitor input level peaks whatever hardware/interface you are using.

very simplistically - Cubase can only monitor what the interface is putting out digitally - this won’t go over 0db so Cubase has no idea if the level on the (hardware) input went over this.

If you make sure that you treat -12db as zero and you shouldn’t have too many problems - just don’t rely on the red ‘over’ indicator working on an input signal.

I can work with this when I’m using an ADC like my Rosetta AD that has Peak memory and reset, but if the interface has no peak hold function, how is one to know if there was a peak without constantly monitoring every input clip light?

What interface are you using ? Does it have monitoring built in ?

I’m sure you know that ideally you shouldn’t be anywhere near clipping with a digital signal - give yourself plenty of headroom (12db ideally - possibly even more). Digital is not the same as analog and it’s not about trying to get max level to disk.

Q. How much headroom should I leave with 24-bit recording?

I used to record in a very 'old school' way; as 'hot' as possible without clipping, and always watching the meters like a hawk...

There are lots of variables so it’s hard to be specific in your case.

Try swapping the meters to post-fader and pushing up the fader by 1db - that might give you peak lights when the input is over -1dbfs ?

one further thing - there’s something a little odd in the initial pictures you posted.

It’s certainly possible to get the input channel peak light to go red and show ‘overload’ - with a 0dbfs signal. RME isn’t doing anything ‘special’.

is the input on the Rosetta definitely maxed out ?

What interface are you using ? Does it have monitoring built in ?

I’m currently trying out the Tascam Series 102i, simply because it was an inexpensive way to get an ADAT input, into which I can plug better converters, such as the Apogee. I believe it has monitoring, though I’m not 100% sure I understand what that means. When recording, I usually monitor the track directly off the preamp into mixing board in order to avoid latency. The last DAW I was using was Pro Tools 6, a long time ago. I remember being able to record a whole ensemble with many tracks and I would see a clip indicator that would stay on for any channel that happened to go over. I know it’s best to keep levels well below 0db, but sometimes performers surprise you with crazy loud performances that don’t match what they did during level check. Like I said, the Apogee happens to have a built-in clip indicator, but most other inexpensive multichannel converters don’t. So I’d like to have a way to see if there was any clipping during the performance with a quick glance. Hopefully there’s a way to see that in modern DAWs. I understand that that 32bit float processing used today opens up the headroom in ways that I don’t think were available back when I was recording last. I can see why this would mean track playback would be less likely to clip, and that’s a good thing! But while tracking I’d like to see clip indicators on the inputs.

yes, although you might be getting confused with some recording hardware (zoom f8n pro etc) that record 32bit float by basically using dual A/D convertors…not applicable in this instance. But yes 32bit float gives loads of headroom.

is the Rosetta definitely maxed out ? - clip lights ARE available on input channels - I assume they light after multiple 0dbfs samples.

is the Rosetta definitely maxed out ? - clip lights ARE available on input channels - I assume they light after multiple 0dbfs samples.

Yes, the rosetta is maxed out and its own peak indicator comes on and stays on until I reset it

I notice the 102i driver comes with a “DSP mixer”

do you get ‘clipping’ if you use the internal mic pres on the Tascam ?

I notice the 102i driver comes with a “DSP mixer”

Bingo, well done and thanks, Dr. S! It was indeed the DSP mixer. See image below - I had to click the THRU button on the input channel to get it to send the full signal with clipping to Cubase input. 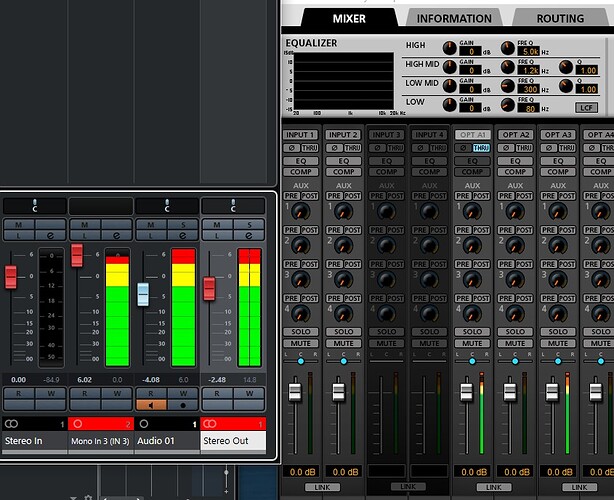