MIDI Signal from a track to a Keyboard's MIDI OUT Port

My Cubase Version is 11.0.41 Pro though I’m pretty sure the issue isn’t version related because I’ve been having it since 2015 when I bought the controller in question.

I’m not sure if the problem is on Cubase side or on Alesis, but I guess I’ll have to check with both.

I use an Alesis VI61 Keyboard as my main keybed. The Keyboard does have both USB and MIDI (Out) ports. Being connected via USB it shows up on both MIDI IN and MIDI OUT lists in Cubase.

When I just play (send keybed MIDI signals to MIDI Out port) things go great: those go to Roland over DIN cable and everything works.

BUT!!! When I want to route MIDI signal from a Cubase MIDI track to that Roland nothing happens. Yet ALESIS keyborad does show as both MIDI IN and MIDI OUT devices.

Thus I assumed that since Alesis MIDI Out port shows up on MIDI Out devices list I can send MIDI from Cubase MIDI track there so it goes further to a MIDI device over a DIN Cable.

Besides the USB/MIDI section of Alesis VI61 manual states the following:

USB Port: Use a standard USB cable to connect this USB port to your computer. The computer’s USB port provides ample power to VI61. This connection is also used to send and receive MIDI data to and from your computer.

If an external device is connected to the MIDI Out, your computer can send MIDI messages via USB to the VI61, which will then send the message to the external device.

Can I somehow send MIDI from a MIDI track in Cubase to Alesis MIDI Out port? 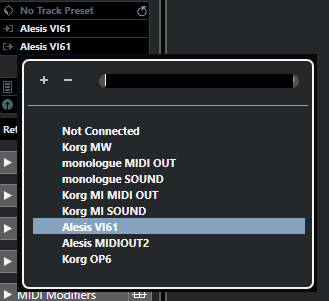 The MIDI sockets of my Komplete Kontrols 49 keyboard are available as dedicated outputs in the list of MIDI interfaces.

I tried everything. I even went the midi port enabler way to check if that could work.

If i understand you correctly this sounds like you need to setup the Alesis output as ‘Thru’ and check too make sure the Roland is set to receive in ‘omni’ mode so it will receive all midi channels via Thru .

It just shows up as a MIDI Out. Are there some obscure tricks to turn it into a thru one?

I checked the scheme against all my outboard synths, not one of them pick up a MIDI signal from Alesis MIDI out sent from a track. Yet when I press it’s keys MIDI signal goes out flawlessly.

The workaround I’ve found so far is routing a MIDI track to MIDI out port of one of my KORGs and picking it up by Roland from there. That way it works.

But thus I end up with needing to constantly reconnect MIDI cables.

Ok , well , have you checked the midi cable to make sure it’s midi and not din ? i know it’s silly biut , basic’s first , then open a midi monitor on the Cubase channel to see what’s being sent , then go to your midi setup in Cubase and make sure no channels are filtered . if that’s all correct then the Alesis must have a setting for turning to input midi on/off or receive single channel mode ? . If THRU is setup there’s no reason why it shouldn’t be passing midi . Is the Alesis set to Omni on input , sorry i don’t know the synth, im just thinking aloud ,possible Local mode ?

The cables are correct. I’ve been jugling them around acroos all my external gear and everything works except sending MIDI signal from a Cubase track to Alesis MIDI Out.

Right Now Alesis is connected via USB to the PC and a MIDI cable goes from Alesis OUT to Roland IN.

Both channels are set to 1 (I don’t see the OMNI option on neither of them).

Whenever I press a key on the key bed I hear a note being played from the Roland and it’s MIDI RX LED shows incoming signal.

Whenever I send MIDI notes from the Cubase track to Alesis MIDI OUT I hear nothing and the MIDI RX LED is off.

What is the Editor for VI61 doing?
Can this be used to change configuration in the keyboard?

Of the keyboard yes, but there’s no MIDI OUT settings there.

You can switch on or off sending various controls like keybed / drum pads / knobs / bend / modwheel data to DIN out.

You may even spread different controls to different MIDI channels like transmit keybed data on Ch 1 while send drum pads and pitch bend to different channel each. Which is cool by the way.

BUT! I don’t have any issue with transmitting MIDI from Alesis control elements to an external device. The problem is that MIDI coming to Alses via USB from Cubase doesn’t go out from Alesis over DIN.

The problem is that MIDI coming to Alses via USB from Cubase doesn’t go out from Alesis over DIN.

Yes, I know that. I understand your issue. But I ran out of ideas now.

May be I just have a faulty one I don’t know.

I found out that this Alesis keyboard doesn’t light up my MIDI Solutuions splitter. Whether I power it off USB or from a socket. It looks like not having enough voltage or whatever.

While all my other keyboards engage the splitter with no issues. Even my little toyish Korg Monologue does.

Though on the other hand it still transmits correct MIDI data when connected directly.

Have you checked that all midi ports are being used in the setup , you say you have the Alesis via Usb ? is there an option to switch incoming messages from Midi to Usb on the Alesis ?

They also advise operating the Alesis VI61 app over MIDIIN2 / MIDIOUT2 ports to keep VI61 ports for the DAW.

That’s it. No USB-MIDI interaction can be switched, routed ot set up in any way.

Answering your question: yes, all ports stated in the manual do show up in Cubase.

It’s not something really simple like engaging the monitor button on the track is it lol , other than that im out of idea’s , ive just looked on line about the controller , it should just plugin and play as stated . Strange .

By the way I wish everyone here a Happy New Year!