For large concert works, which are divided into movements (Flows), what’s the best way to get ‘movement labels’ in the parts – assuming I want more than one flow on the same page.

See the attached for the sort of thing I’m after. 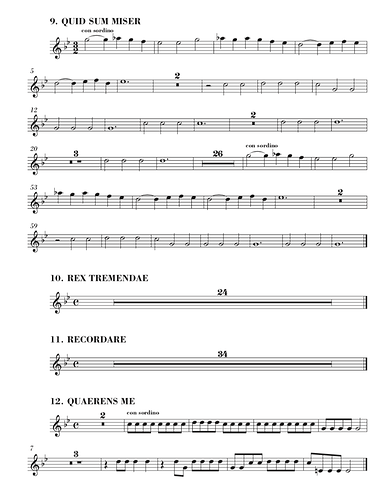 It needs Master Pages for these cases.
You may prepare one or two Master Page templates with two, three or more Music Frames. Then I would add Text Frames at the top left of each Music Frame with {@FlowTitle@} tokens.
Only once you have finished your project you would have to assign one of these individual Master Pages to the appropriate Part page and adjust Music Frames and Text Frames accordingly.

That seems a lot of work…! And I have no way of knowing how many systems I need on each page until I’ve laid it out, so I’d have to lay it out twice: once to get an idea of fit, and page turns, and then again with the masters.

And I think I’d have to use @flow#Title@ manually in each text box?

Another way would be to add the movement titles as system text. They would show in each part, but you’d probably still need to drag them in place.

That was my original thought. Though, as said, I wouldn’t necessarily want those texts showing up in the Score. I would have thought that this sort of thing is pretty common in parts, so I will (in due course) expect a Dorico clever way of handling it.

That was my original thought. Though, as said…

My apologies, Ben. I didn’t read your post carefully enough.

For the result in your attached image, I just very lazily used shift T to add titles as tempo markings. It was perfectly OK for one of Handel’s organ concertos that did not need any other tempo markings within the movements (so I could change sizing ad lib). This is really no extra work at all.

For centered movement numbers/titles on its own row I used three master pages in the way KB suggests: “title on top”, “title in the middle”, “two titles”. Then I added these page changes while doing the layout process, IE not afterwards. Sometimes I had to change the title manually when the title token failed, and in the tacets.

The second way is a bit more convoluted, but nevertheless quite quick to work with and gives a consistent result.

In your case with many movements per page I would go the tempo text way.

Interesting. Though some movements will inevitably have Tempi markings. Once I embark on some of these big projects, I’ll try out these various ways and report.

This has been discussed many times here. If you search for posts by me where I’ve used the phrase “flow break” you’ll probably find some of my previous posts on the topic. The basic gist of it is that there is a plan for a clever Dorico way of doing this, and I hope we’ll get to it relatively soon, as ideally it shouldn’t be required to have master page overrides for something as common as starting a new flow on the same page of an instrumental part.