MPE - Polyphonic Pitchbends with a single VST instrument / using one preset sound - How is it done?

On Cubase 11 Pro, I would like to pitchbend several notes in a chord into opposite directions at the same time with a single VST instrument and with the same preset/sound and in the same Key Editor. Is that even possible? I thought it is one of the features of the MPE but I have now spent one whole day trying to do just that but without no success. I tried it with Retrologue, Padshop and HALion Sonic SE 3 (all of which should be MPE capable).

Finally I found this video last evening, watched it and thought hey that should be easy… 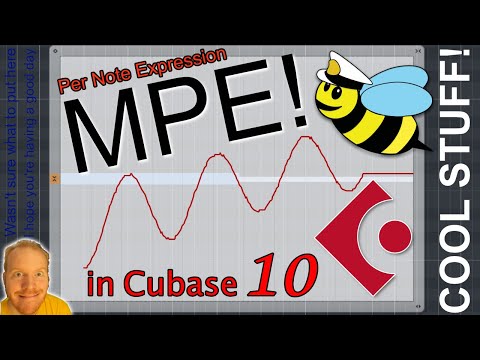 So I did this:

3. Drew a note on the Key Editor and made sure the note was selected and then marked the ‘Pitchbend’ checkbox from under the Inspector / Note Expression section. I also marked the check box: ‘Record MIDI as Note Exp.’ and turned on the ‘Overdub Note Exp.’ -button.

4. Chose from Cubases drop down menu (still the drawn note selected): MIDI / Note Expression / Open Note Expression Editor → to where I drew with the pencil tool a pitchbend curve and then tested it by clicking and holding mouse on the note (it worked and played the drawn pitchbend curve correctly [with MPE preset sound]). Finally assigned the Channel # of the individual note as #2.

5. Drew the second note in the same Key Editor two octaves above the other note. And as selected, assigned the Channel of this second note as #3 and unchecked the checkbox: ‘Pitchbend’ (from the Inspector / Note Expression section). Finally opened the individual/separate Note Expression Editor for this second note and checked that there is no pitchbend data or anything else (and tested the note by clicking and holding it and it played thru without no pitchbends).

NOW… when I press the play from Cubase IT BENDS THE BOTH NOTES!? Why is that? What am I doing wrong or missing out? Really frustrating and time consuming! I also tried it so that I drew a pitchbend curve for the second note that was going in the opposite direction but then it just sounded like a horrible mess (because the pitchbend tried to go in both directions simultaneously at a fast pace on both notes).

ps. I’m well aware that I could make a second instance of the same synthesizer and then bend the notes whatever way I would want. But since this should work with MPE as well, I would like to execute this function through it. Actually what I really would like to do is to draw one long note (for example one bar/measure) that sustains/keeps the same pitch and assign the Cubases loop on and hit the play and then play various notes using the same synthesizer/preset sound AND do pitchbends (with a pitchbend wheel or an expression pedal) over the note that keeps its pitch.

Could someone help and spell out, how do I succeed in this matter?

You don’t have to set up the specific MIDI Channel for every single note. Cubase takes care for the Channel Rotation by itself.

Could you attach screenshots of your settings, please?

Sure, here are few screenshots:

Oh, I forgot to mention I don’t have an MPE capable midi keyboard (for now). But I would at least want to be able to program/draw the polyphonic pitch bend stuff in Cubase. Though I wish I could use the pitch bend wheel or expression foot pedal to actually play these things… I just don’t know if it is possible… ?

I would appreciate if someone with Cubase could report if they are able (or not) to make these polyphonic pitch bends I mentioned (using MPE) on Retrologue, Padshop, or HALion Sonic SE 3. (the video I linked to the opening post explains this technique quickly and clearly starting at 1:33)

And here is an update on my progress on this issue…

A couple of days ago, I somehow managed to do this (on Retrologue): When I played one note on my midi keyboard (and held it down), it played that note, but a second note also started playing at the same time as soon as I moved my expression foot pedal… so I was able to pitch bend this second note with the expression pedal while the original note was playing under it and keeping its own pitch all the time. This is something I would really like to experiment with (and use/practice).

This, I think, happened somehow as a result of when I marked the ‘Pitchbend’ checkbox from under the Inspector / Note Expression section and hit the ‘MIDI Learn’ button and then briefly used the expression pedal to link it with the pitch. I had done this many times before and normally it works as you might expect it to work, i.e. you can pitch the notes you play with the expression pedal, and no extra notes play at the same time. And unfortunately, I no longer can’t get it to work the way I mentioned above. I wonder what other settings I maybe had used to make it work the way I described?? (I tried many different settings on Cubase, so I don’t remember everything)

The other good news is that I installed a free VST instrument called Surge and with it I got a polyphonic pitch bend to work as soon as I set its Channel to ‘Any’.

So it looks like I’m missing out some settings in Retrologue, Padshop and HALion Sonic SE 3 OR…

…they simply don’t work that well with an MPE?!?

So, I would really appreciate if anyone could report if the MPE (pitchbend) works on those Steinberg VST instruments on your Cubase. Thanks in advance!

Well, it seems that no one has anything to say on these issues / problems, so I have to contact Steinberg support directly.

Select the NoteExpression, like Tuning, not the MIDI CC parameter, please.

(and here is the same text as in the above screenshot) If I make a new Retrologue track and a blank midi clip / Key Editor then there is no ‘Tuning’ option in the Inspector / Note Expression menu. I can scroll the menu for more options but they all are CC… the only ones without CC are those that can be seen in this screenshot, i. e. Pitchbend, Aftertouch and Poly Pressure.

What do I need to do to get the ‘Tuning’ option available also with Retrologue (and Padshop)?

…or is it that there is no ‘Tuning’ option for Retrologue and Padshop?

I can see the Tuning parameter for Retrologue and Padshop. See attached screenshots, please.

Hey now I realized why I didn’t have the ‘Tuning’ option there (nor Volume, Pan, Cutoff or Resonance). The Channel of the Retrologue Track must be set to 1. I had it put on 2 all the time because that was what the video I linked to in my opening post advised. Now it works!