multiple staccatos on a single-note tremolo

Is there any way to attach four staccatos on a single-note tremolo as follows?

It would be nice if Dorico natively supports this.
However, I am not sure if this abbreviated notation is preferred by players.
Any opinions or experiences?

It only makes sense for measured tremolos which are played fairly slowly, so you don’t necessarily save a much space using the notation. I would always write out at least one complete group of notes in full with staccato dots on each note, to avoid any confusion.

This sort of notation saved time when music was copied and engraved by hand, but IMO it’s not so important now.

I’ve done some library work replacing parts. This notation is used sometimes for repeated notes without it being an indication of staccato.

I’ve done some library work replacing parts. This notation is used sometimes for repeated notes without it being an indication of staccato.

I see this a lot in marches. My interpretation is that the “tremolo” marks indicate subdivision. If staccato marks are also present, I believe they always indicate the notes to be played staccato. If the notes are not intended to be staccato, then the “tremolo” martks are sufficient.

I think that is pretty much universal in marches. Perhaps there are different conventions in other styles of music.

I don’t believe this convention is archaic. It is a useful shorthand that makes the music easier to read, particularly in long stretches of repeated notes.

This notation is used sometimes for repeated notes without it being an indication of staccato.

I’ve seen it used when there are triplet tremolos, as a reminder of how many notes to play rather than as a staccato instruction.

You can’t play rapidly repeated notes at the same pitch legato on any instrument that I can think of, in any case.

I don’t believe this convention is archaic. It is a useful shorthand that makes the music easier to read, particularly in long stretches of repeated notes.

I agree to you.
I hope that Dorico team would be interested in this theme.

I’ve often seen this notation in orchestral and chamber music parts, and in my experience, it always indicates staccato playing. Non-staccato does not mean legato, btw…
In the attached Mozart example staccato and non-staccato stretches are clearly distinguished. In practice, both would be played spiccato (i.e. with a bouncing bow), but the main motive should definitely be more articulated. The ‘tremolo’ notation is a very useful shorthand. It saves paper, and makes parts easier readable. It is not archaic. It would be nice if Dorico eventually also would support these staccato dot groupings over repeated notes.

If you look at Mozart’s holograph, he didn’t use that notation, and he also had the common sense not to write staccato dots for the basses at that tempo, though he did write them in the higher parts.

But if course editors who are good at uniformity and pedantry preferred to assume the dots were missing by carelessness not by design, and put them into the first published editions.

Amusingly, the Barenreiter Urtext edition also puts staccato dots over the section that you claim “is clearly distinguished” by not having them.

At the end of the day, just play it whatever way you like best

(It’s the bass part from the overture to the Magic Flute, of course.)

As Rob says, bad example. The manuscript “clearly distinguishes” staccato and non-staccato stretches, and the bass part is non-staccato! 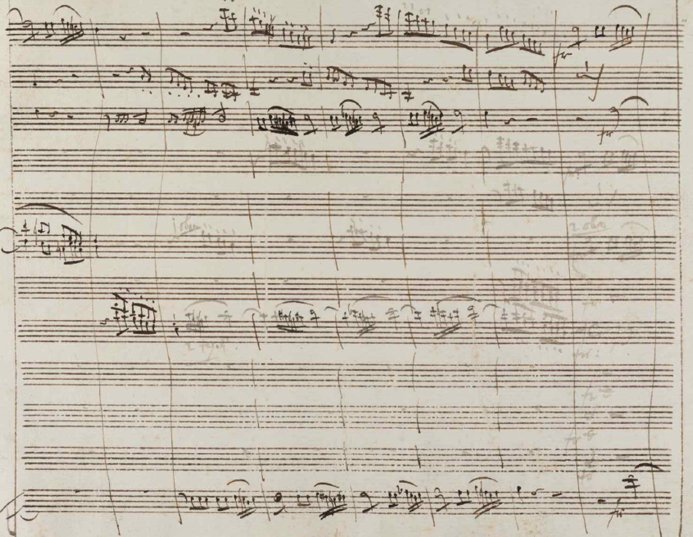 OK, you’re right, my example is by no means Urtext, most of the dots shouldn’t be there in the first place. It’s just a random orchestral part (probably from IMSLP) I have lying around, the first one I stumbled upon that contains the multiple staccato dots over the repeated notes. I simply wanted to show that this notation is fairly common. Whether it’s editorial or not is not the point. My example wasn’t meant as musicological evidence on how to play Mozart correctly

As a player I have to say I like this kind of notation. Makes life easier and more joyful. I hate it when copyists clutter the paper with endless repeated patterns, when it is not necessary. It does not help to write everything out note for note, in contrary using the ‘archaic’ notation eases the eye, helps to get a better overview and also looks nicer on the paper.

prko, the only way to transfer the custum playing technics seem to be to keep your file and use it to start your new files - adding new flows.
You could keep one “Masterfile” in which you have deleted the former flows and use this file as a start for new projects.

Anders is right (and k_b wrong, on that matter). Save your new playing technique as default and it will be available in all (new, I think. Maybe all, but I should check for that) files.

oh Marc, thank you, I have learnt something today.

The playing techniques used in a project are stored in the project. Nothing “will happen” if you send the project to someone else.