I am using Cubase since version 10 (I’m on version 12 right now) and there is something about recording multiple takes that really annoys me, so I wanted to check out if it is intended behavior. I kind of tried to accept and get used to it but it keeps getting on my nerves.

If I record multiple takes, every take will be in successive lines on the track, first take first line, take 2 in second etc. After recording some takes when starting recording again on the same track, the one would expect that new takes will be under old takes so if there was five takes, first new take will bi in a lane 6, second in the lane 7 etc. But for some reason, if recording has started before the left locator, the beginning of the recording will be in the expected line, but first take will end up in the lane 1, hidden under the first take of the previous recordings, while all other takes will end up in proper places, below previous takes. So every time I record, I have to go to lane one and manually move that take in its place. It looks like this: 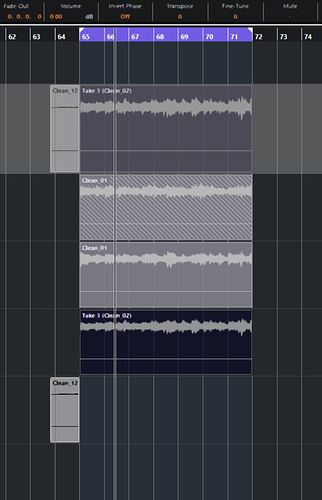 Is this expected behavior? It is really bizarre

No & yes it is bizarre. What is the small bit of audio in the lower left?

Each take should appear on a new Lane regardless of if it is created by Looped Recording or as an individual take. How are you initiating Recording, manually or Punch-In? Also what is your Audio Record Mode set to?

Thanks for the reply!

Audio record mode is set to “keep history”, and common record modes are set to “punch in/out” and “start recording at left locator/punch in position”.

The small bit is the part of the first take that was recorded in front of the left locator.

For instance I will start playing the track few bars earlier (to get into groove) and then hit record to start recording. I want to record multiple takes so left and right locators are at positions where I want to cycle the part of the song. This problem does not occur if I start recording by hitting record directly, but when I play and then engage record before the left locator. Expected behavior would be for first take to begin at the position recording started and end on the right locator and all other takes to start on the position of left locator because of cycle recording. Instead of that, Cubase splits first take into two parts, this small bit is part of the first take that was made after hitting record, before the left locator. It stays in expected position, below previous takes. Cubase puts the second part of the split below the first take of the previous recording, and rest of the takes in proper positions, below the the “small part”. In this image only one new take is recorded, but for instance if there was three new takes in this case, it would look like this: First recording, three takes in proper order, after stopping and starting recording again, here would be just a small piece of first new take , then cut off at the left locator, first take missing / moved to first lane, than all other takes would be where they are expected to be.
If I start recording for the third time, again the same, first take will be cut and once again added on the first lane (three takes now there one behind the other) and all other takes will be in proper order.

English is not my first language so I hope my explanation was good enough. 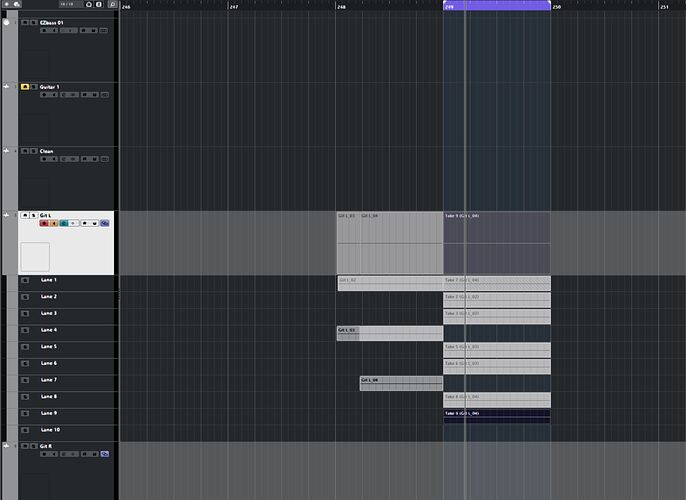 Here, I have made short example, three times three takes. Every time I hit play few measures before the left locator, and then hit record roughly around measure 248. As you can see, every time Cubase puts part of the first take that is between the locators on the first lane.

This does look like a bug. Have you tried the same methods using different Common Record Modes?
My first guess is that it has to do with the Punch In/Out mode in conjunction with starting to record before the left locator. It could be that Cubase (wrongly) triggers a second “Start Record” instruction internally when the play head reaches the left locator.

Agree. @DushanS can you add an “issue” tag to this thread.

I was initially suspicious of the punch in/out but after playing with this for a while it seems to only be related to the location where recording starts. In these two animations I’m not using punch at all. I’m using the Transport Record to both start the Transport and Initiate Recording.

The first shows what happens when the Cursor is at the Left Locator when starting, recording several takes, stopping and then starting to record some additional Takes. This all behaves as expected with new Takes being added to Lanes at the bottom.

The second animation shows the same thing except the Cursor is one bar before the Left Locator. Everything behaves as expected until recording the second batch of Takes. Notice on Lane 4 (i.e. the first Take of the second batch) once it finishes that take and loops back to begin the next Take - the portion of that Take which is within the Loop vanishes from Lane 4 and moves up to Lane 1.

@DushanS @raino Yes, big bug here, I have made some more findings and I believe they are related, and as shown on your videos the same issue occurs with the Cycle History mode. So, it may be with every mode in fact, but only during Cycle.

Hi, There is an issue where the recording Audio Event would turn invisible when Cycle is enabled and the audio record mode set to Replace. Reproduction sequence : Create an Audio Track and choose any input (no need to record actual audio, the signal can be blank) Set the Locators over a few bars, Enable Cycle, Put the Cursor anywhere within the Locators range, Set the Audio Record Mode to Replace, Hit record and keep the loop going. Result : When the Cursor reaches the Right Locator, and it…

@DushanS , which version of Pro 12 do you have?