Finally got my eagerly awaited new MacBook Pro M1. Yeah!!! Had the Apple store transfer all data from my old MBP. Everything working great. Only had to reactivate Nuendo, Cubase, and Wavelab. So happy to see the CPU meter down where I love it - no more jolts or stopping play with meters flashing unless I freeze all the VSTi’s. N12 working great - no more crashes when closing a song. Only had the machine one day but that has been an amaaaazingly happy day.

Glad to hear it! So it’s finally safe to go M1? I’ve been sitting on the fence for a while. My 2015 iMac i7 4-core 4 GHz is still doing OK (better than expected for a 7 year old machine!!), but I might go for an M1 MacBook Pro OR one of these neat looking new Mac minis as my next studio machine, maybe next year!

I’ve almost the same setup, and the only big bug with M1 (Native or rosetta) is when you delete or Disable a track (mainly Instruments tracks) I’ve to stop disable them because it crashed nuendo very often…

I’ve been running an M1 Max Mac Studio / 64 GB / 2TB for months now for Post and music and it’s been rock solid. The ONLY thing that has caused Nuendo 12 to crash is Antares Auto Tune. It’s the plugin because it crashes Reaper and Pro Tools as well.

I’ve mixed several episodes of a web series without a single glitch or hiccup. I can get the Audio Performance meters to dance with Omnisphere and Analog Lab, but they never overload. Overall, it’s been a smooth transition from Pro Tools.

EDIT: I’m running mostly in Rosetta mode. Native Instruments has been slow getting on the Native bandwagon and I own Absolute and we all know that Steinberg hasn’t converted everything yet either. My favorite companies, Arturia and Spectrasonics made the jump early.

I am considering an M1 pro macbook 14” To replace my aging MBP 2015 (dead battery, noisey fan, blown out speakers, slowish).
That MBP has 16GB of ram. In my mac mini 2018 i have 8GB of RAM. I never run into issues with these setups.
How necessary is it to have more than 16GB with these new processors?
I mainly do Post Audio : short form documentary, sfx recording and mastering and sometimes music with analogue gear (midi).
Is Nuendo RAM hungry? Or are there other benefits for having 32GB ram?

Or are there other benefits for having 32GB ram?

Yes. Any modern day software doing any style of music that involves plugins will benefit from having more ram available.

Thanks, but in which way do they benefit? I never use big sample libraries. The only real advantage of having a lot of ram was (in my pro tools days) ram cache for audiotracks. But since really fast nvme ssd i don’t notice any issues with my 8GB of ram.
I do think that future software products will always take advantage of more/cheaper ram. But it is hard spec out on this. 64gb seems total overkill for audio-post.

But since really fast nvme ssd i don’t notice any issues with my 8GB of ram.

That comparison doesn’t work. SSD is just plain storage, RAM is processing memory. You can not process data on the SSD, all data needs to be in ram while being processed.

Whenever you want to work on something it has to be pulled from SSD into the main memory and the more you are working on in parallel, the more ram you need. That is not simply cache, it is the part of the machine where the work happens.

In my opinion 8GB is the smallest possible size nowadays, espacially because you also need to take the OS into account. MacOS as well as Windows require more and more memory, just to start and run the computer and thereby reducing the amount of available ram for your work significantly.

I personally do not buy anything below 32GB anymore, unless it is a simple laptop for word processing or such things.

thanks and of course, i understand the difference between an ssd and ram function. however is was trying to make to point about ‘ram cache’ in PT which was a way to make sessions faster on playback (slow harddisks made it hard to have many audio tracks). so having lots of ram was pretty important back then for smooth playback. Nowadays that doesn’t really matter and that is why i stated that the fast ssd’s make that difference in the necessity for a lot of RAM in that use case…

however you are correct that RAM in general has a different function, actually i found a really helpful video that explains it. 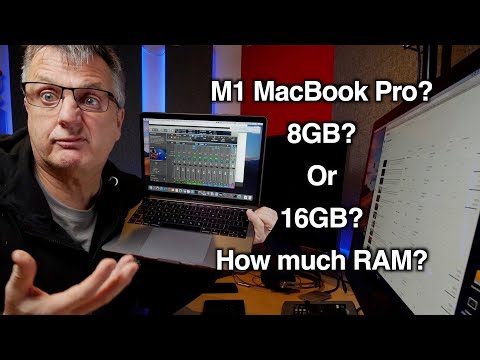 I wish i had found that a bit earlier

I am often on the road and then work on our projects with my laptop. This was specially fitted to my needs three years ago and I love it. But it “only” has 8 gigabytes of RAM. Nevertheless, I can even work on larger Atmos projects with it. Okay, sometimes I need to render certain effects and can’t keep them “open” for edits forever. But with good planning, that’s not a problem. In fact, I think it’s an advantage. It disciplines you immensely. Because I tend to want to get the last percent out of many things. And that costs a lot of time and, as a result, money.

I can understand that not everyone wants to work that way. Personally, I’m fine with it. What worries me, though, is that many programmers seem to rely on computers getting faster and better. No one seems to rely on lightweight code anymore. (With a few exceptions.) I think that’s a shame, because a new computer or laptop always requires new (precious) resources.