I guess I should have uploaded the file for Luke Johnsons LE presets. Lots to choose from, pick and choose according to your workflow.

I wish there was a sticky for PLE and LE presets.
Metagrid_App_Specific_Resources_v1.4.6.zip (341 KB)

Same idea as regular ‘Paste Relative To Cursor’ but for time.

This would be very useful to say, copy an entire section of a song that has pre-bar lead ins, and insert it into already existing sections of the project:

Targeting Default Track Colours
And another thing that needs to be fixed with PLE integration, is PLE can’t target default preference set track colours. ie, whatever the default colour is for an audio track when it is added, the PLE cannot target it even if you have added that colour to the pallet of which you are using in the PLE script:

Just an observation on this after reviewing my thread,

Obviously this is because the PLE uses the colour name, and not the actual colour RGB#'s, and so PLE isn’t going to default track colours because default tracks, despite me adding their colour to my pallet, don’t have my colour name attached.

This could maybe be resolved in different ways :
1.)PLE could access Default Track Colour Preferences

3.)Colour Palette could be accessible in Preferences via a new tab.

Personally, I think 3.) would be the best, I think it would be less work for the end user, because for one it would work with their current colour palette and secondly, it would likely help avoid the need to create a bunch of OR conditions where a user has to add both their ‘Palette Default Audio Track Colour’ and their ‘Default Audio Track Colour’, and would also perhaps save users from having to change their already existing colour presets to RGB/HSV#s. 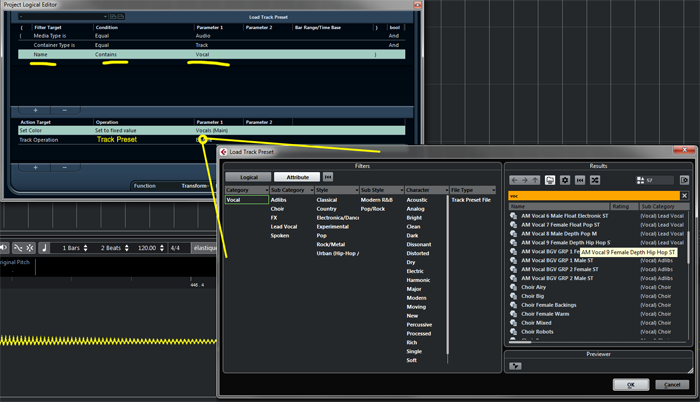 Further thought on this… you could go deeper into the tracks operations into Insert loading.

/-- For ‘Param2: Choose Insert Slot #’ you could make it so that entering ‘0’ will look for the first open-unused slot.

The protocol with PLE ignores preference 'Track Selection Follows Event Selection" which is all in all, probably a good thing - but in certain situations, I would want a PLE part of a macro with this new function command “Refresh Track Selection (Based on selected events)”.

For example, if I wanted to select all Audio Tracks with ‘Parts’ on them, this would enable that:

The above PLE script in a macro:
-PLE script
-Refresh Track Selection

This simple key command function addition would open up some new possibilities to make track selection scripts based on the tracks event/part contents. This could be stacked with a visibility command:

So many commands/scripts, not so many keys

Key Command Banks would allow users to create variations of their keyboard command layout and change between them as the Banks of “sub-presets” themselves could be assigned to key binds.

For Example, I could have all of my Key Command Banks EXACTLY the same except for the NumPad which would change to different commands depending on which Bank is selected.

user macro library would have to be at the top level, above the banks. ie switching Banks shouldn’t alter remove/add what macros are available.

Further graphical representation of this utility:

Hi, going through my key commands and doing some tidying, I thought… damn, so many great key commands, but not so many keys. Simple solution. Create a new protocol called Key Command Banks which would essentially allow users to create variations of their keyboard command layout and toggle between them as the Banks of “sub-presets” themselves could be assigned to key binds. For Example, I could have all of my Key Command Banks EXACTLY the same except for the NumPad which would change to differ…

As stated, this would be useful for creating a Key Command matrix for PLE/Macro scripts

I came across an instance of needing a function like this when writing an AutoHotKey -> Cubase Macro script.

Basically the only way to emulate this, is by enabling preference ‘Track Selection Follows Event Selection’ - but, because this is a toggle preference, it is not very dependable in scripts, and secondly, leaving that preference on sometimes clashes with other preferences and scripts.

The other option, is

WHOPS, threads so long I forgot I already requested this lol

Key Command/Function Refresh Track Selection The protocol with PLE ignores preference 'Track Selection Follows Event Selection" which is all in all, probably a good thing - but in certain situations, I would want a PLE part of a macro with this new function command “Refresh Track Selection (Based on selected events)”. For example, if I wanted to select all Audio Tracks with ‘Parts’ on them, this would enable that: Media Type Is | Equal | Audio | And Container Type | Equal | Part | Fun…

Protocol for connecting Tracks to FX and Group Channels.

– Could list all Sends in operation ontop of ‘Unused Send’ ie

The above could potentially be accomplished a different way, ie

You select an FX track and then the script targets tracks to be connected to it.

and another way, more similar to first

Whichever way, this could allow for some very quick, streamlined, routing. Especially for people who have detailed templates with FX tracks already created and named. Users in many instances, would never have to open up their sends routing, as this type of PLE preset could be hotkeyed, even macro combined with other track selection based PLEs.

Upon opening PLE Window, hitting tab once, only cues the header description space. It goes no further - doesn’t enter into the actual script portion.

If this could be done, a scripting program like AutoHotkey could be used to tab to the, for example, name replacement fields

This would be useful in templates for users who are consistent in their track setups.

For example, if I set up my multi-timbral synths to be in folders with the same setup such as

And I set up all my multi-timbral vsti’s like this, then I could come up with a consistent track selecting system

This would require that
A.) Cubase sees when user has selected a FolderTrack and or a Track inside a FolderTrack and thus binds this protocol to that specific group of tracks.
B.) A new protocol is added to PLE: Folder Track-Position
0 = FolderTrack
1 = first topmost track
2 = second track
and so on.

In addition, there could be some other PLE protocols here, if there was a targeting condition “In Selected Folder”,
then specific track types could be targeted

With PLE, I have 16 MIDI Channels, I’ve created key commands to select each one, 1 through 16, using track name targeting,

This only only allows me to select one channel at any give time though. If the above was added, I could create toggle selector key commands, and or, addition selection key commands.

Not sure if PLE should handle this, but there needs to be a way to target specific Visibility Presets beyond the 1-8 key commands provided.

TrackVersions are another feature that was added to Cubase which never made it’s way into being integrated into PLE.

This would very useful, as it would allow TrackVersion operation without track selection, based off things like track name, ‘has data’, etc

for example, as part of my template, i have record tracks 1-16. Essentially a record track for each of my AD/DA, all these are tucked into a folder. I’ve created PLEs already that target this record folder and record tracks - toggle show/hide folder, toggle record arm of each track or all tracks, etc, etc.

These tracks are named in a specific way so they can be targeted - CH#, MicPre name acronym.

Man…you are really really deep into it. Impressed.
Is there a site or post where you share your created PLE presets or even Macros? I am sure you came up with insane ideas that could help a lot of people with their workflow (incl. me). Ideas i havent even thought about yet probably…

probably at some point but haven’t had a chance to organize it/them in a way that would be tangible for someone else to understand, and also, a lot of the mechanics depend on being used in a macro and vice versa so they wouldn’t work if I only shared just the PLE preset file, I’d have to give macro instructions and the topology order as well. So it will take some time

While they are at it, some attention on the LE would be nice. Getting it to select different length notes, especially triplets is a PITA.

This thread is great - some really great suggestions.

But here is my request -

Speed the preset menus up!! please!

As you start to build a good bank of presets up the PLE gui slows down so it takes longer and longer to select them or edit them. Automation through the generic remotes you don’t see the slow down but when manually doing it, time can stand still.

I have over 4000 presets now and it is totally unworkable if I want to manually reset or amend one.

Cubase seems to cycle through the whole list every time or something when loading one so it takes forever!

Extensive PLE (and MLE) user here so a hearty +1 to all of these suggestions. Especially the idea of being able to instantiate, query and/or address specific insert slots and plugins by name

I know you can’t reply, very sad. But if you have consistent track/template setups, then can’t you just apply one of infinite colours to the track and tell the PLE to look for it?.

Yeah, I like to brain storm what Cubase could (should) be. The LE and PLE were cutting edge DAW additions. I doubt we will see many improvements in this area as those devs have probably moved on to greener pastures.