So I’ve recently been trying to make the jump over to Nuendo as a dialog editor, but I’m just trying to understand how other dialog editors go about relinking production audio to the picture edit that’s been handed to me through AAF/OMF, etc.

I’m aware the field recorder import has its flaws in a major way with not being able to properly pull up metadata and even when the correct files are found they won’t be correctly timecode stamped and their placement on the timeline will be incorrect, but how do you editors work around this in Nuendo? I’m just looking for a similar workflow to how you would do the field recorder workflow in Pro Tools essentially if there is a way, otherwise, it just seems I have to do everything manually.

I have also seen other posts about this topic but I’m not sure if I follow them correctly as people seemed to have differing opinions.

We do all our dialog editing in Nuendo, from documentary work, over episodical productions for TV and streamers to feature films. I have almost zero hassle with field recorder workflow as it is implemented in Nuendo. The most important thing is to get an AAF with “copy all media” except as “consolidate”. You do really need the whole file laying underneath, which can be really big for docs (hour long interviews) but is not as bad for fictional work.
As long as you have Scene, Take and the duration anywhere in metadata or file names it works just fine. Sometimes I just use “duration”, sometimes only scene and take… Sometimes when the on-set people screw up really bad only use scene and browse through the different takes if they don’t match.

As always for transitioning from ProTools to Nuendo try not to force Nuendo to do something the “ProTools-Way”. There are different workflows with similar results.

Ah, I see, so I just need to always ensure I ask for untrimmed audio files each time I get the AAF from editorial? Mildly annoying for me currently as I’m just trying to do a dialog edit on previous projects I’ve already finished (just to get used to Nuendo) so I can’t ask for that now, but if that workflow does work seamlessly I’ll try to give it a shot when I can. Thanks!

Also, does it matter if the AAF/OMF are embedded or not, I’ve seen some people mention something about that as well?

[Edit] Would still also love to hear from anyone else about any workflows or workarounds that they do for this process.

[…] about relinking production audio to the picture edit that’s been handed to me through AAF/OMF, etc.

EdiLoad and/or Matchbox for initial assembly here.
First choice: EDL’s,
Last choice: AAF
Very often, we need both to cover all of the mishandling of metadata during recording/picture edit)

If it needs to be Q&D, and metadata is preserved then I use the guide audio from the video editor (which is normaly Boom- or Lav-Mix from location sound) and I relink all of the ISO tracks with the Nuendo Field recorder Import.

Very often I also only import the booms from the Matchbox /Ediload assembly, and then import the ISO tracks one by one, according the scene.
That way, you don’t end up with + 300 tracks, when you only need half a dozen specific ones per scene.

@Fredo can Matchbox be used to assemble location audio also? That feature wasn’t clear to be?

can Matchbox be used to assemble location audio also?

There are ways to do that, but never tried it.
I always use Matchbox as a problem solver. And it does that extremely well.
For basic/standard assembly I use Ediload, which is great.

While I appreciate the sentiment of not forcing the PT way on to Nuendo, as one who has slowly been migrating for the past few years, I’d offer that we often “don’t know what we don’t know”.

While learning (and asking for help here), I’m coming from the “long time PT user” perspective and really only know that way of working.

That said, I really appreciate the information on this thread, in particular. There have been many ah-ha moments for me recently, but that’s only after someone has said, “This is how you do it”.

With EdiLoad v5 it can assemble all channels of the location WAVs and export a dialogue edit ready AAF. Here’s a fun demo: 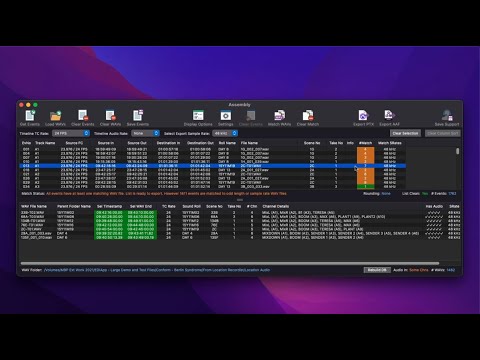