I Get this error mostly when moving a slider or a knob in waves plugins inside cubase. and cubase crashes without letting me save the project. looks like somethings wrong with video card? 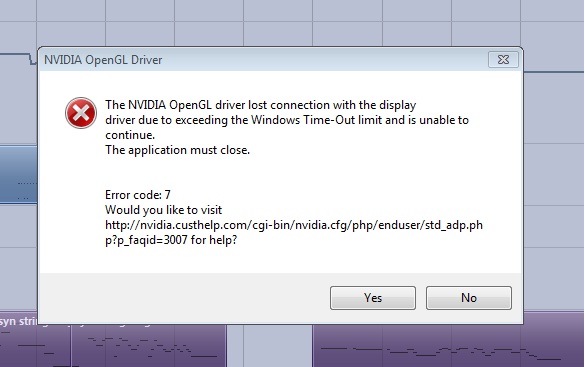 Could be a driver issue, download the Full driver for your card from the Nvidia site and try that out, sometimes the proceeding speeds up with a newer original driver, if that does not help you can increase the time Windows allows the card to work on the graphics, see this article on how to change the value in the registry:

Microsoft Learn: Build skills that open doors in your career

Gain technical skills through documentation and training, earn certifications and connect with the community

BTW what sort of a graphics card do you use? If it is a built in on the motherboard you are recommended to actually change to a graphics card, even a dirt cheap one, the hiccup that is created when the graphics core momentarily takes over control from the memory controller can interrupt the timing on Cubase and Nuendo.

P.S. Like your username, I still use the old 01W for AM sounds that no softsynth appears to offer properly.

I use nvidia geforce 7200. But about 2 weeks ago i went into settings and noticed that i have a slider set more towards to appearance rather than performance, switched it all the way to performance and since than didnt have this error yet

P.S. Like your username, I still use the old 01W for AM sounds that no softsynth appears to offer properly.

i’m still on the look out to buy the great old korg 01/w for a price i can afford. even thou it is worth 3 times the price it goes for