Maybe I did not say it clear enough. When I move the music to the lower staff, the octave line does not affect it. If you look closely at the example, perhaps you understand better.

When I move the music to the lower staff, the octave line does not affect it.

But it did in your example. The octave line didn’t move down, but the pitch is now notated up an octave, so both examples have the same sounding pitch.

I want the notes of the first half of the bar to be written as in the staff above.

As Lillie said, you’ll just need to manually add the octave line. The sounding pitches will remain the same.

it is not the same thing, it must belong to the same voice

i think programmers should provide. I’ve used Sibelius for a lifetime and it did it quietly. Anyway thanks

You can remove the rests in each staff and then flip the stems?

If I want to join the stems it is a problem

So this isn’t what you’re trying to do either? 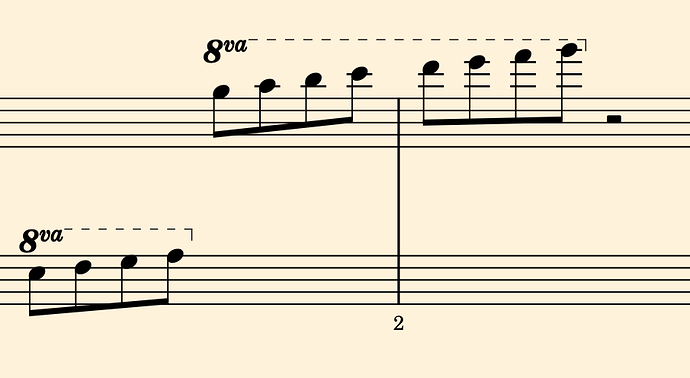 No, I want only one octave line

In Engrave, you can adjust the start position of the RH 8ve to the start of the bar and custom scale the LH 8ve to 1 (to hide it).

Dorico can do this absolutely fine, with no workarounds:

well. I did this but the final step was missing: Alt + Enter. Thank you

No, I want only one octave line

Generally speaking, this would be incorrect notation. Here’s Gould pg 324.