I need to change the ottava alta and bass both to just an 8 with the font minion pro italic 10p.
How would you go about doing this ?
For the moment, I’m trying hard with “text” in the Edit music symbol but it seems I can’t control the dashed line position start point…
Also I have to cheat and use the “tuplet plain font” style that I set to minion pro italic to do this.
I can’t use glyph and see italics (just latin etc)

Do I have to use a grahic file ?
The house rules I need to follow are like this (see picture)

Thanks for your help
All the best

No, Derrek. It’s not quite the same issue.

There isn’t really a good way to do this at the moment. See https://www.steinberg.net/forums/viewtopic.php?t=150931#p820723 for why.
If you can persuade the glyphs section of the Music Symbols Editor to give you a Minion Italic 8, then you should be ok. To be entirely honest, in order to do that you’d probably have to take Minion Pro into a font editor, make a copy of the font, replace the regular 8 with an italic 8 etc. If you can be bothered to go to that effort, you might as well just edit Bravura so that the Ottava character is replaced with one from Minion Italic.

If you actually did this, I don’t know what the impact would be if you sent Dorico files to someone else, or tried to export as PDF.

mmm…
thanks for these links, it’s very clear now.
what a time consuming thing… I have no time for that.
I guess adding a dedicated font style for octave lines will be the best solution for this.

Unless I’m missing something, this doesn’t seem to be that difficult. Yan, you are almost all the way there if you’ve already edited it in Music Symbols and replaced it with text. If you aren’t happy with “tuplet plain font” just edit an unused font style to be the font you want for the 8. All you have to do next is edit the X and Y positioning there, then go to Engraving Options/Octave Lines to set the line position.

Fred, I don’t think it’s that simple, unless there’s something I’m missing. If I use text in the Music Symbols Editor here, the line appears under the 8 even though I’ve told it to appear above the 8. I can use the y offset to force the 8 lower but that results in the following: 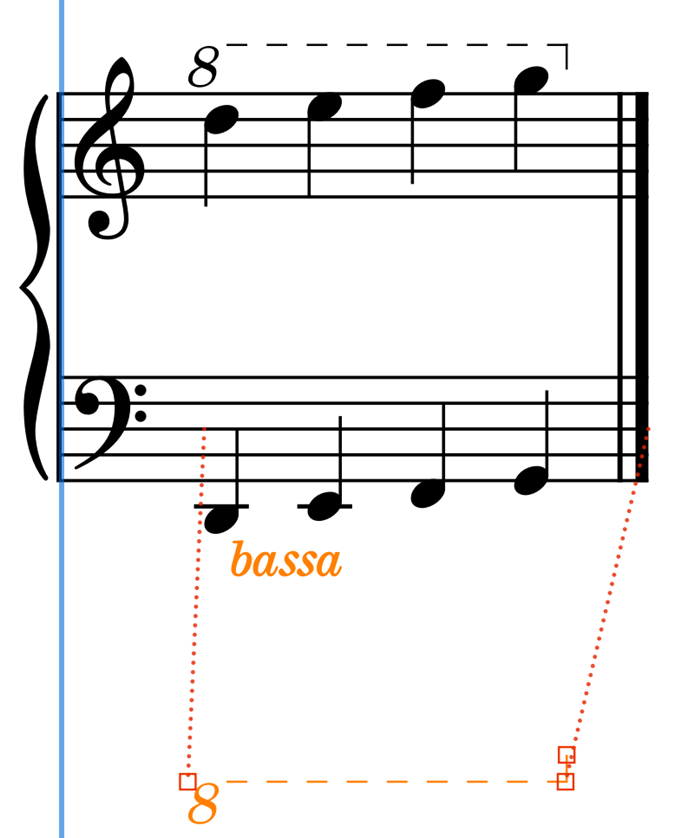 Sure, I could fix those things locally, but in a less trivial example it would entirely screw up the staff spacing.

Fred, I don’t think it’s that simple, unless there’s something I’m missing.

You’re right, there is one more step. I wasn’t thinking through the fact it needs to work above and below. I’m assuming he’s starting with defaults that look more or less like this: 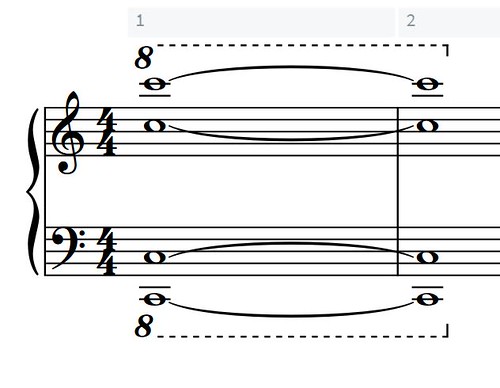 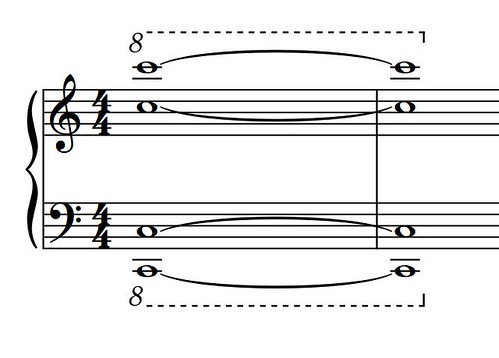 Yes, I see the workarounds…
but that’s really to much work as every one of them need to be done.

but that’s really to much work as every one of them need to be done.

I’m not sure what you mean by “every one of them need to be done.” As it’s a global setting you just need to do it once per file for existing files. It shouldn’t be more than 30 seconds or so, once you know what the settings you want are. If you save that setting in a template you always use for that publisher, you won’t need to ever do it again for new files.

maraesz, I am so glad you are not using the obnoxious “va” that one sees as the default in software; never in piano music of the best modern publishers. Now check out the extension lines in Henle, Wiener Urtext, Peters, Schirmer Associated Board etc. They are also quite different from what is shown in the examples above; much smaller dashes closer together. And the point of attachment is a little different as well.

John, that’s a bit of a stretch. The ottava is unnecessary, perhaps, but hardly obnoxious.

Sorry, dankreider, for me it is more than obnoxious. I toned it down for the occasion.

Aaaah. I had not realised that if you stick with the default “8va” and “8ba” the text attachment points work (almost) correctly. Thanks Fred, that’s really helpful.