I’ve come across a problem when editing an XML imported file from Sibelius. The 1st violin part has some ossia sections to be played on repeats - this part was imported as a grand staff instrument so I am copying across the music onto a new player using ossia staves. When pasting into the ossia staff the selection goes into the main staff, as shown on this video:

You will see from the video there is already an ossia section in place which I was able to paste into with no problems.

What’s going on here? Is this a bug or a current limitation on how ossia staves work? Am I doing the right thing by creating a “new” ossia staff for each required section? Is there a more elegant way of converting my grand staff 1st violin into a regular 1st violin with an ossia stave?

It appears you’ve actually just hit a bug. To work around that, you could try to extend the very first ossia on the new instrument, so it covers the entire range you want to edit (you can just delete the -1 signposts). I believe you will see copy/paste working as expected then. Once you’ve copied over the music, you could delete the long ossia, then recreate new ones with the desired length - the notes will still be there.

I hope this will allow you to keep working, we’ll fix this issue in an upcoming patch release.

Alternatively you can Copy, then set the caret at the start of the ossia stave, then right-click, Paste Special, Paste Into Voice whatever.
Like so: 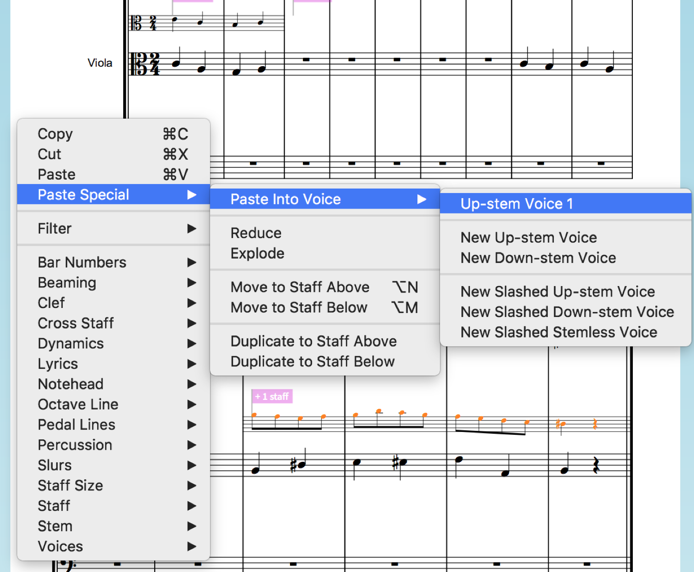 Ah yes, thanks Leo. That works too, because ‘paste into voice’ completely ignores the (incorrectly determined) stave visibility.

Thank you both. Leo’s suggestion worked nicely for the time being, but it’s useful to know I can extend and contract ossia staves without losing the music on them.