Have included screenshots to show the problem - including my settings. Unless there’s something I’m not aware of - higher core CPU’s are not going to fix this - I’m also only running 10CPU’s as I have hyperthreading turned off - I have read more than 14 causes a problem - but I’ve also read Cubase 10.5 should use all Cores - which it is - but having a bottleneck on 1 CPU seems to still be a problem.

Was looking at upgrading to a newer i9 - 10980XE - but now I’ve done more testing and looking at those CPU performance - I’m not convinced it will make much difference. 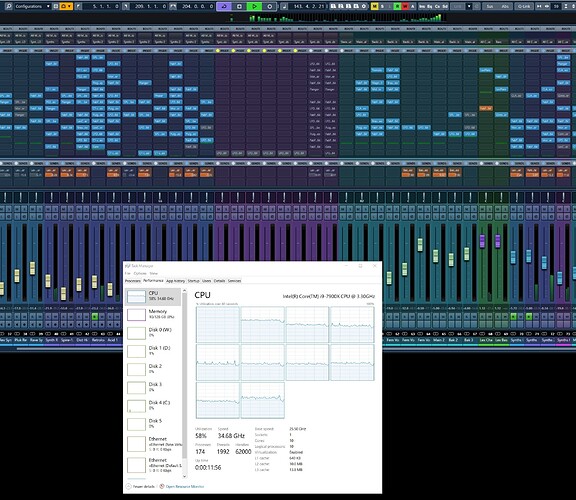 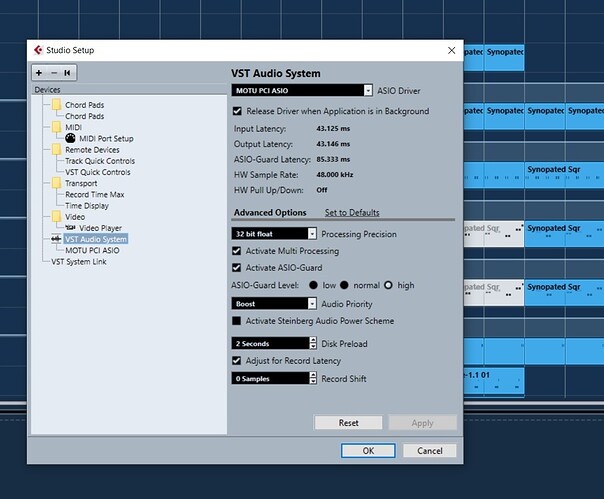 I have the same CPU as you and am very disappointed in audio performance compared to my previous i7.

Did you turn of hyperthreading in the bios ?

Yeah I turned it off in the bios. I also had mine clocked depending on load - with all Cores maxing at 4.4 and could run at that speed stable. Couldn’t get 4.5 stable for long periods.

I upgraded to the 10980XE - and it is significantly better. It still has the same issue with CPU1 maxed out, with others running at barely 50%, but the performance is significantly better, which might be because I’ve got a higher clock at 4.6Ghz. 4.7 worked, but wasn’t stable for a long period - 4.6 seems rock solid.

So I’d say there probably are optimisations Steinberg could do to get more out of a chip and spread the work around, but tbf, I’ve got 42 vsti’s running with well over 100 insert plugins, so appreciate managing all that must be quite complex.

What latency are you running at ?

If you have a VSTi followed by heavy plug ins on a record enable track that is routed to busses with more plug ins that feed a master with half a dozen demanding mastering plug ins, then yes, 1 core will overload while others are not doing much.

Right now, that is the same in Logic Pro X and Cubase. And probably every other DAW. It’s very hard to load balance that sort of stuff.

My 5 GHz i9 9900k is very good at this(great single core performance) but I can still overload it fairly easily with my 6-8 favourite mastering plug ins.

Was all ok until recently, as a VSTi heavy track has got more complex. But - what I’ve noticed, is that CPU1 is maxed out - and the others still have a fair amount of headroom.

by more complex do you mean that you have added more voices?

what VST is it? like Diva has option to turn on/off multicore, maybe that is an option for you to look into?

What latency are you running at ?

Latency depends on what I’m doing. Don’t have the need for very low latency most of the time - and with over 40 VSTi’s running - don’t think it’s possible to get a low latency. With large projects like that I’m running at 2048. But where I need low latency I’ll bounce to stereo and then go to around 128 buffer - unless it’s a new project so can start out on a low buffer.

What I have discovered - is due to the requirement of CPU0 doing a higher percentage of the work, I’ve overclocked my CPU0 to 5Ghz - and that has made a massive difference and running other cores at 4.6.

For anyone that’s comfortable in overclocking - I’d highly recommend this if your hitting this problem - and the easy way to see is just check your CPU performance - if CPU0 is at 100% - but you have overhead on the other Core’s look to overclock CPU0. I think the more core’s you have, to get the most out of it, the difference between CP0 and the rest should be bigger. I’m running at around 11% difference between CPU0 and the rest - but got loads of headroom on the others.

Obviously only overclock if you know what your doing - AND - have good CPU cooling, but if you’ve got a good multi-core CPU - it makes sense to get the most out of it. I also don’t run my CPU overclocked all the time - I’ll change the speed depending on what I’m doing - if I haven’t got cubase running I’ll underclock it down to 2GHz - which all helps towards the life of the CPU. Don’t see the point in having it run fast all the time - plus is saves on electricity doing so.

It also makes sense that overclocking just Core 0 to the max - won’t cause the whole CPU to over heat as much - so this is definitely optimizing the CPU to get the most out of it for Cubase.

Was all ok until recently, as a VSTi heavy track has got more complex. But - what I’ve noticed, is that CPU1 is maxed out - and the others still have a fair amount of headroom.

by more complex do you mean that you have added more voices?

what VST is it? like Diva has option to turn on/off multicore, maybe that is an option for you to look into?

See my comment above to the previous post - but I’m running mainly Spire, Massive X, Serum, and East Wests Play. Don’t think there’s anythng I can do to make these more efficient - but have managed to optimize my CPU to get more out of it - as commented above.