As the playback “shortens” non-slured notes by a certain percentage of the note duration, it leads to rather incorrect results with long ties. For example, in the score below, the cello will stop playing way before the viola in bar 4: 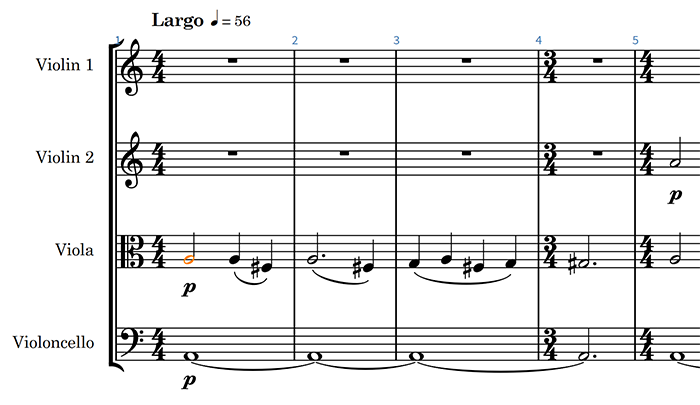 In an actual performance, the break in both parts should be equal.

So the playback engine should somehow take into account the current meter, and for example trim 15% of a dotted half in this case, not 15% of a 15-quarters note.

+1 this has been annoying me too!

Really, it seems (at least to me) like the “shorten by a percentage” approach might not be the optimal one. Even if notes are not sounding concurrently, I can’t think of why I would want the spaces between non-legato notes to be variable. I imagine a more human-esque result would be achieved by using either a percentage of some fixed note value (e.g. "shorten all notes by 1/10th of a quarter note) or some function of tempo and meter (e.g. "shorten all notes by 10% of the tactus in a fast tempo, 6% in a medium tempo, and 3% in a slow tempo–I realize that this can be made into an actual function, but oh boy, it’s been so long since I’ve done math, and I’m a musician for a reason…).

My two cents, at least

I totally agree with snakeeyes021, in particular about the differences in tempo!

I end up always going to the preferences to reduce the gap when writing slow music, and raise it for fast music. Not only should the playback adjust itself automatically to compensate for tempo, but in addition, fixing it manually in the playback timing preferences won’t help if the piece changes tempo along the way.

And having the option to have a “universal” gap relative to the tempo instead of relative to note duration would be really nice.

Yes, I agree that we should change this. I think shortening by a percentage is fine in principle, but there should be a maximum amount of real time beyond which it shouldn’t be allowed to take effect.

Hmm, the logic did previously constrain the maximum amount of shortening for long notes, but I suspect something got broken at some point.

On thinking about it, that would be much more ideal than my suggestion I think; I wasn’t really thinking about very fast music that’s represented in very small note values (it’s the Episcopal choral singer in me; honestly, who ever uses durations shorter than an 8th note???

No, the value isn’t currently able to be set by the user. We perhaps need to rethink the formulation of this, as Daniel suggests.