Hi there, has any one experienced this? its really frustrating, all seems to be working ok but it keeps popping up so obvioulsy some thing nor right…? 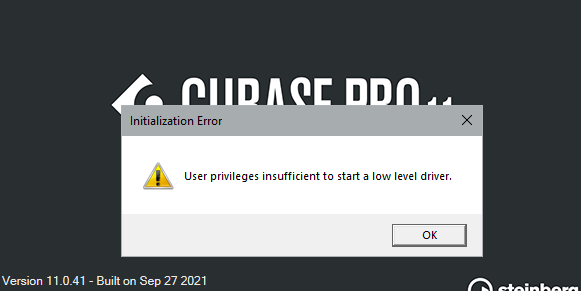 I would try to reinstall Cubase (and the Audio Device, MIDI devices drivers) as administrator.

Thanks for your reply Martin. I had set some time aside for a full system restore though some time searching on line led me to some pointers, firstly to Avid, then to Ilok.

It turns out that the error was related to iLok and VSL install which had overwritten parts of the iLok drivers with a version that was not compatible with an older plugin though i’m not sure which one as there’s quite a few on my iLok.

It was fixed by running “InterlokDriverSetup Win.exe” which was already in a folder called “Old Installers” so thumbs up to iLok for thier forsight in assuring ongoing compatablity with older plugins as technology steams ahead.

Its a shame that Steinberg removed support for some of thier older synths whilst withdrawing them from sale, hence the VSL as a host for excellent synths albiet 32 bit an no longer on sale. Plugins are relatively cheap compared to hardware but its still no fun when there consigned to the dustbin by other people not long after purchase.