Searching for this I see it can’t be done. It would be great if moving the glyph around in the PT Editor would affect the position relative to the note. Not all technique markers sit directly above a note. There are quite a lot of requests for this on the forum. I know you can use the Engrave mode to move them, but this is tedious and can lead to offsets that vary as you have to do it visually.

Labelling this with feature-request so it goes on the over-the-horizon feature request backlog list.

Changing the position of a playing technique glyph relative to a note can be done:

I agree that having some options for left/centre/right alignment for playing techniques would be useful, and it’s something we would like to add in future.

In my case I want to move objects down and in front of the note, and have Dorico cognisant of the spacing. without manual intervention in Engrave Mode. This allows, for one thing, a whole class of 17-18C ornaments.

So it’s full X-Y positioning I would like, not just X.

I don’t think playing techniques would be the right way to achieve ornaments that are positioned within the staff in any case. Can you attach one or two examples of the kind of placement you’re talking about?

Well, disregarding ornaments, not my prime concern in this instance, I just want to put a wind instrument type scoop before the note, and have the spacing adjust properly.

For that, I would suggest you use one of the existing jazz articulations.

I too have this problem. I recently wanted to add brackets to a rest, so I created a PT glyph (is there a better way to achieve this?), which must then be repositioned in Engrave mode.

I did try @johnkprice’s workaround, but couldn’t make it to work here (an aside: how can I find/add a glyph by just typing its unicode?).

It did work on another case, to reposition a tutti comma mark that I replaced from a factory caesura: 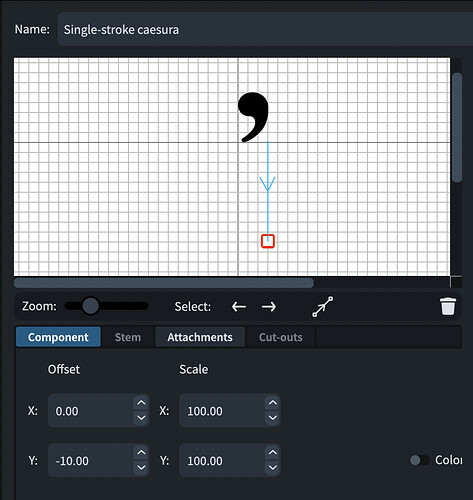 But on this yet another case, the space character trick is powerless. I created this line with that glyph arrow line annotation, but couldn’t make the arrow to be positioned exactly in the middle of the notehead, no matter what the X-offset is in the glyph editor, so it must always be set afterwards with a X-offset in Engrave Mode. 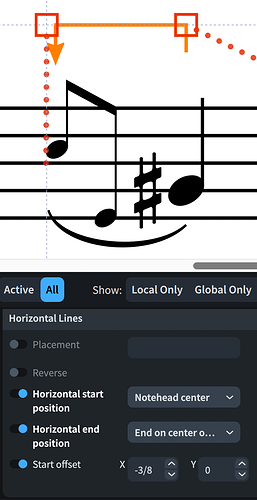 So, I would like to extend @Andro’s request to other glyph editor cases, not just Playing Techniques.

Hi Andro. If I’ve understood what you’re after (symbols in-line before a note) then repurposed Ornaments will work (they may be articulations, but Dorico puts these under Ornaments). They can be positioned vertically with Y offset, and although X offset doesn’t work they may well be automatically in the place you want.

I’ve repurposed one of Dorico’s standard Ornaments. Here’s a screenshot showing my thinking: 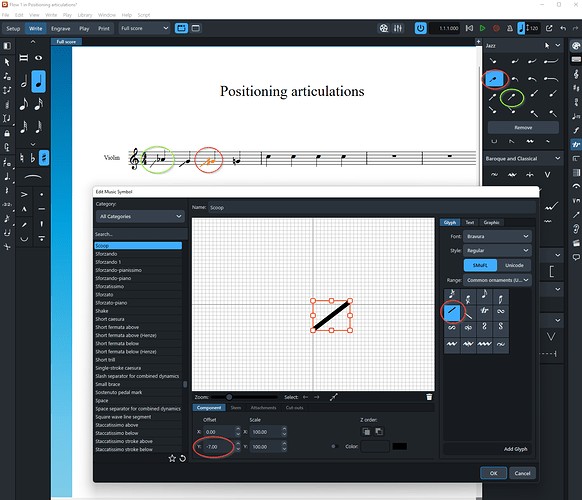 The red rings are for a Scoop with the default glyph deleted, one of the SMuFL Common ornaments added, and a Y offset of -7 applied.

(If the standard ornament/articulation called Lift (straight) in Dorico 4.3 does the biz (ringed green) then that’s simpler, of course.)

Thanks for raising this. I’ve been meaning to look at repurposing Music Symbols for a project I’m in the middle of, and this was timely.

The Ornament above the Scoop, the Plop Bend, is also available for repurposing with a different symbol, but I think that’s the lot for ornaments/articulations in-line before the note.