I have a problem with importing MIDI to an existing Timpani staff.
If Timpani player is set to: “No key sig 1.10 octave”, it’s impossible to select it as a target for a MIDI track. It’s grayed out in MIDI Import Options. The only way around this is importing into a new Timpani player (the version with key signature) and then copy to the old staff. What am I missing? 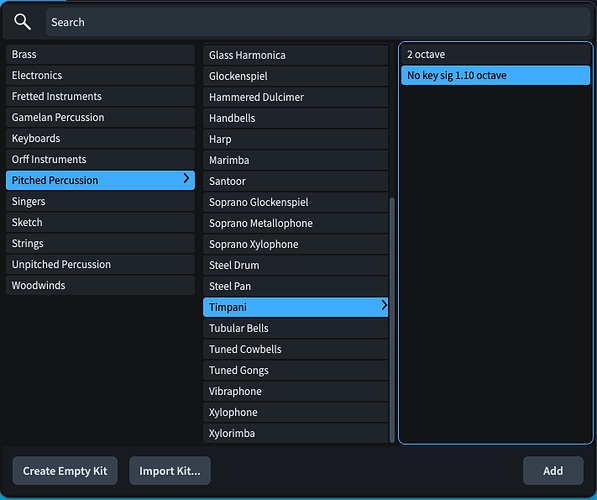 Can someone please verify if this is a bug or a user error?

Thanks @Craig_F. That’s a good idea, and much safer than copying.

I have this thread on my list of those to investigate, but haven’t yet had a chance to do so. I will come back to you as soon as I can.

I appreciate that. Thank you.

Sorry to take so long to come back to this thread, but I have over the last couple of evenings had a chance to dig into the problem. The problem is that the two timpani instruments in Dorico’s default set have different unique identifiers, and the algorithm that matches the instruments it has guessed should be used by the tracks in the MIDI file is only looking for one of the two possibilities, so even though the existing instrument in the project would be a perfectly acceptable target for the track, Dorico doesn’t think so.

We should relax Dorico’s method for matching existing instruments in the project a little so that it will consider an instrument that is an alias or variant of the instrument it thinks it needs as a valid target. This is something we’ll try to address in our next update.

Thank you for looking into it @dspreadbury. I’ll look forward to a future update.