Q: Ways to Get Chords Into Cubase

This was posted in 9 but no reply so I’ll try here.

The long roundabout way is saving the song in the main Biab app as midi with a BB Chord Output track that is dragged into Cubase and Cubase gets the chords from that.

Or what about MusicXML import, what versions import the chord symbols from musicxml to the chord track ?
As I could make a script to convert the Biab Song.txt chord names to musicxml.
Also what about midi marker (chord names) import, will it copy the midi markers to the Chord Track ?


Or if I have to script it to send hotkeys to Cubase with AutoHotKey and AppleScript I would have to
Manually Insert chord at bar 3 or bar 1 with -2 bar offset
Set grid to Beat
send the following:

Run Script>
Enter (to open Chord Picker)
Tab
Paste chord (the script will read the chord name, bar, beat location from the Song.txt)
Tab will insert chord and move to next bar ( is there a hotkey to move to next Beat ?? )
Esc, Esc will close chord picker
Ctrl+right cursor will move to next beat or Ctrl+left cursor to previous beat

…or you could just simply learn about chords?

…or you could just simply learn about chords?

Not really sure where you’re coming from there or what you actually mean, this is not for me personally to use, it is for other Cubase users that asked for this feature to integrate the Biab Plugin into Cubase.
Basically it’s to get the chords from the Plugin without having to type them all out, as you can see in the Studio One animated GIF and the Reaper video the chords are just instantly inserted.
If you could elaborate a bit more I could maybe understand.
Do you mean have the script generate up the actual midi notes from the chord name:

say Cmaj11 so note 1 would be the root C and the type maj11 will give the other notes up ?

This is the Mxml from here https://www.steinberg.net/forums/viewtopic.php?t=124096
imported into Biab main app:

I presumed with BIAB you just exported the MIDI data, and then Cubase will analysise that when you ‘create symobls’ to chord tracks. I’ve never seen any kind of import options for Chord Track on it’s own.

So, as a work around, Scripting could work as you have the inspector at the top in Cubase which allows you to type raw text in, but you’ll be relying on position of screen elements for the script to run successfully. Surely just export the raw chords from BIAB into MIDI file and analyse is the best, simplest method?
https://www.dropbox.com/s/qmrih0pu325pobs/Biab-Chords-to-Cubase.mp4?dl=0

Thanks that is a video I made, that’s the roundabout way that means you need to use the main Biab app.
I think I will have to script it, the only thing I need to know is you insert the first chord and hit enter to bring up the chord picker window, then if you hit Tab it will take you to the chord entry box at the bottom, I type the chord name…
now if I hit Tab it will enter that chord and move to the next Bar
but if I don’t want the chord on the next bar but on the beat 3 is there a keyboard shortcut to move to next beat rather than next Bar using Tab ?
else I need to esc the chord picker window and move the chord back 2 beats with
“Ctrl+left cursor to previous beat” provided the grid is set to Beat.

If you’re using the text file to plot your chords then i’d send “Shift+P” and type the bar/beat position - i.e.:- “2.3” (Bar 2, 3rd Beat) and press enter, and then you can add a new chord like that - you can as accurate as you require then, and not rely on being relative to other entries.

You can use the copy and paste command to drop new chords at the playhead position and then use the inspector to confirm the Key/Type/Shift etc.

Would it not be easier to set biab to a style that just plays each chord once in root position, and then import a midi file from it into Cubase?

Thanks guys ! that’s 2 great solutions !
I’ll will try the midi track way first by generating a midi “Held Chords” track and dragging the in from the Biab Plugin,
though I just recall they were not played in the standard chord format but some are inversions and Cubase did’nt pick them up correctly. But I will give it another go as there maybe newer midi tracks with held chords.
Thanks again I’ll let you know how I go.

You can also create your own style in biab, so you can have everything in root position.

I might suggest to them to have a midi track that generates up held chords in the root position.
I tried some held midi tracks and it worked fine with basic chords but I suppose it would not have all the chord types Biab has, as I’m getting a Amaj7 rather than Amaj7b5 same with the Fmaj7b5.
Now with the Shift+P hotkey that works good for bar, beat location.
I’m not familiar with the marker track but would copying markers to chords and vice versa be doable with hotkeys, as then I could script that up. 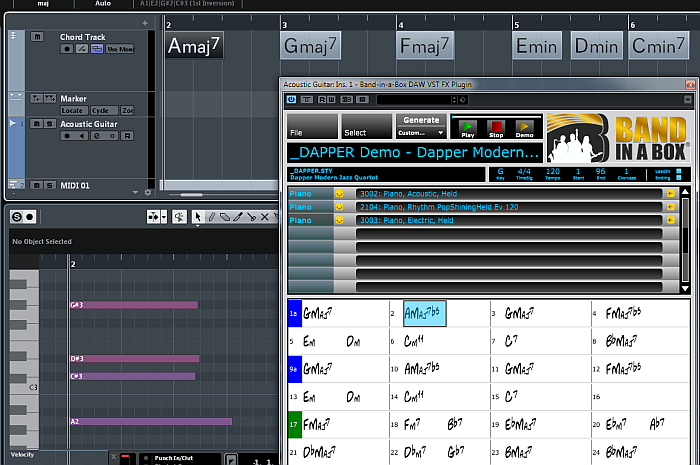 Another issue users are having is the VST window when set to Always On Top then a message may popup in the system tray or you click on the desktop the VST window vanishes.
Is there a setting somewhere to actually keep it on top ALWAYS ? 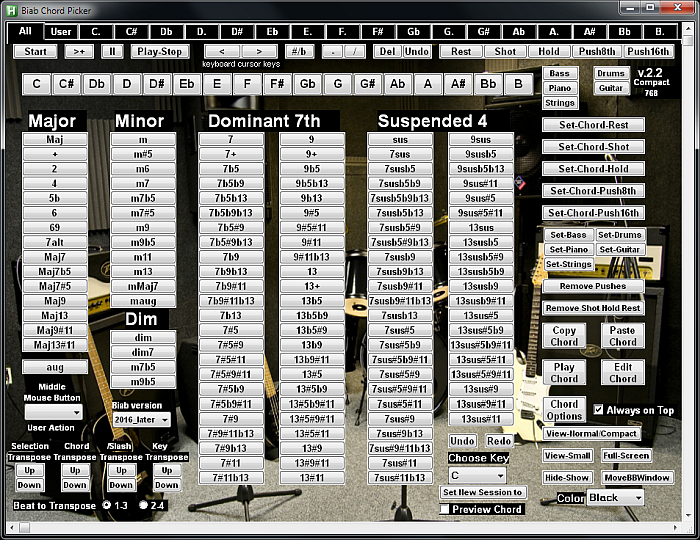 Quick thought… When the window ‘disappears’, can you not ALT+Tab to bring its focus back, to allow the keystroke to work…?

I thought you was reading the .txt file? Surely that’s by far the easiest and most reliable method? You have everything there and don’t need BIAB instance running, you could even use it on a computer without BIAB.

That’s the BIAB VST that generated up the held chord midi tracks you see, you drag the yellow midi icon into Cubase without the main Biab app being opened.
Now the chord picker GUI that sits “On Top” sends the keystrokes to Cubase but as you click a function button on it the VST window in Cubase vanishes and does not stay “Always On Top”.
Now I just thought, the GUI is made using AutoHotKey and I set the Cubase window active “ahk_class SteinbergWindowClass” it may bring back the VST window but I need to be able to send all keystrokes to the VST window, in other DAWs they have an option “Send All Keystroke to VST” is there a setting for that in Cubase ?
Now to get the chords from the the Biab VST Song.txt I would use a GUI like the one you see but created for Cubase to do function/macros with a user tab that you create your own custom Cubase functions or macros.
So say you want to copy your chords to markers so you can send the midi and other tracks to another user with say Pro Tools, they import the chord name markers from the cubase midi file, so that’s why I would like to be able to copy the the chords > markers markers > chords with keystrokes ???

so it needs the setting send all keystrokes to VST

For these 2 solutions you just load the VST then load any VST inside them, this way the Plugin stays on top if there is a flash message or you click on the desktop.
Use MiniHost
Direct Download Links
DropBox
Mac
Win
The other way is using PluginFlipFlop if you already have JBridge
If you use FlipFlop you can then use Biab Plugin Chord Picker Tool Generic v1.2 for Most DAWs
See below, the first VST slot is the normal Cubase VST window that vanishes the second slot is PluginFlipFlop that you load any VST into and it will actually be Always On Top not matter where you click, and the Chord Picker Tool will send chords to it.
BB Chord Picker Tool Cubase Example