Experiamentializing with Chord tracks at the mo.

What I would like to do is to set up a basic string part using different tracks for Bass, Cell, Viola, Violin, then have them for the chord track. So, for example, the Bass would follow the root say, the Cello an octave above, teh viola say a third and the Violin 2 octaves above the bass. When a chord in the chord track went up a half a tone, so would all the instruments, when the chord track stipulated minor any thirds would trasnform from minor to major
I am not too familar with chord tracks, at present I am getting chords for any single note written in a part/track, which is not what I want

Is this possible, how?

As far as I know there isn’t a method that lets you follow a specific voice as it moves from Chord to Chord on the Chord Track.

I think the closest you can get would be to drag the Chords onto an Instrument Track and then edit the resulting MIDI Parts using the Logical Editor to set the bottom note to a MIDI Channel, the 2nd lowest to another, etc. Then use Halion or Kontakt to load the various Instruments on the needed Channels.

Here’s an example LE preset. The Note position starts counting from the bottom with 0 not 1. 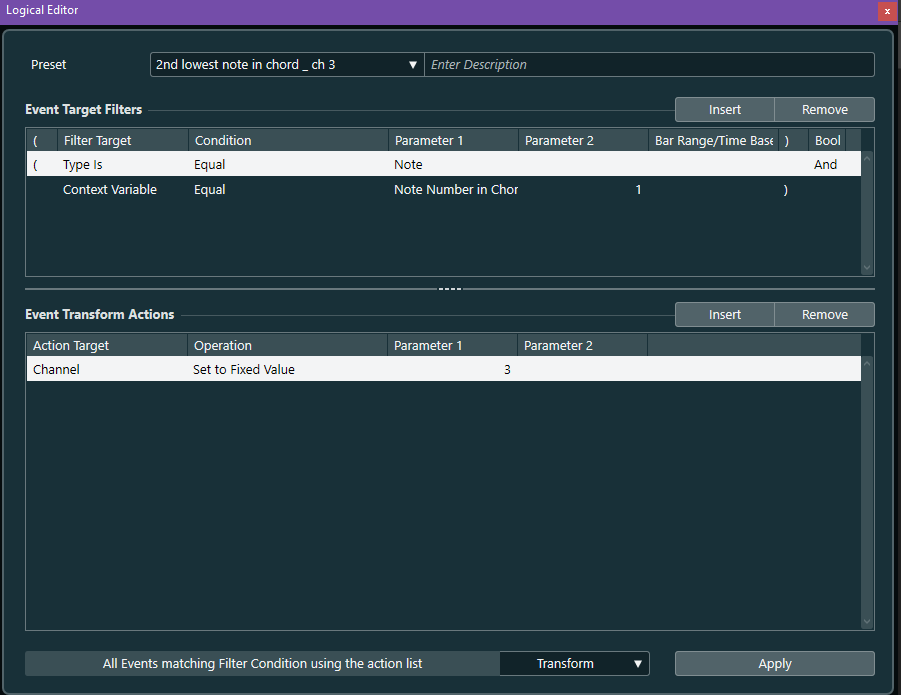 Got something going Raino, here is a test CPR (uses Hollywood Opus)

I am contemplating saving Orchestral Voicings as sketches this way