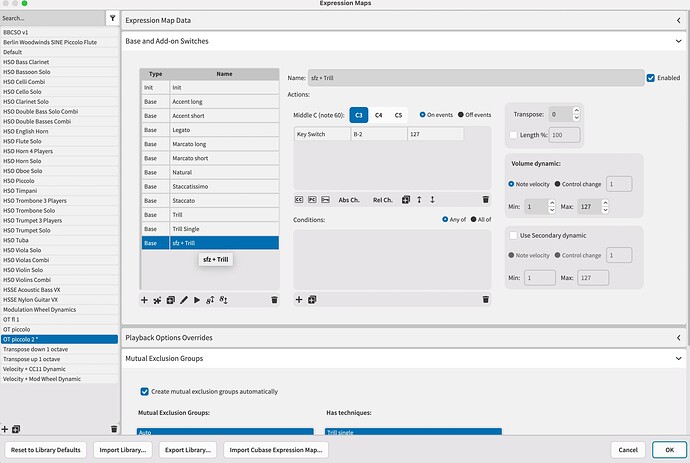 Am I missing anything or am I misunderstanding the function entirely? Thanks!

You’re not misunderstanding entirely, but when Dorico triggers a sampled trill, it triggers either a half-step or a whole-step trill, each of which has its own playback technique, so you need to define combinations for both of those.

I’m afraid that is not the case, since I’m using orchestral tools library, where there is only one trill triggered by one keyswitch (there are others like trill single & trill sforzando, but no separation between half-step trill & WT trill). The interval of the trill is determined via CC3. So I don’t see why I need to define combinations for both. So these are the steps I’ve done so far (to create trill sforzando):

I may be misremembering, but I don’t believe dynamics in Dorico actually give rise to playback techniques, so if you want to trigger a specific sfz articulation, you may need to define a playing technique to create at the same position (it can be hidden if you like).

You can see what playback techniques Dorico is actually resolving in the playing techniques lane in the Key Editor.

After many trials and errors I found that that’s not true but you did inspire me to find out the answers. I think I’ve solved the logic behind all of these AND I’d like to offer some workaround & suggestions to Steinberg. Here are them:

BTW I’d like to know your name. Thanks for your help!

To see the name of anybody on the forum who has chosen to provide their name, click on their little avatar picture, which will show their user card. You’ll see that my name is “Daniel at Steinberg” but that’s not the name my parents gave me.

My name is Daniel Spreadbury, and I’m Dorico’s product manager.