Hi everyone,
i want to assign a fader on my masterkeyboard to act as an expression controller. I know this is probably totally simple, but just can’t figure it out right now.
In the device setup, i tried generic remote and vst/track controls…the “learn” function does recognize the fader and when activating track quick controls on a vst instrument, it controls the (main) volume. But how can i set it to control expression ?

Just send the expression controller cc11 from the keyboard to the track. Generic Remote not needed.

Hi and thank you, the problem is, the keyboard is an old beast, a KX88, i’m sure i can’t be set up somehow, but i have no manual at hand. Isn’t there any other way ?

Update: just looked up how to do it on the KX88 and it is indeed quite simple. But - there are loads of midi messages i can assign to the faders (and it’s working), but of course not expression…it’s not on the list :(( (although it has an expression pedal input)

I don’t think that’s a list of midi CCs. You’ll need to find the manual.

Or, you can use the Cubase-Pro-only Input Transformer to transform an existing message to the one you want.

Thank you, i took a look at the input transformer and watched a yt tutorial, but my version is different (newer?) and i don’t get how to set this up. Any quick tips on the transformer (Cubase Pro 11) ? Thanks in advance.

Really different? Are you sure? It hasn’t changed for ages.

Been watching this tutorial, and yes, the list entry in the input field is different from mine (“controller”), also the output…right now trying to figure it out via the KX88…help would still be great on the transformer though.

The names of the fields are context sensitive. I suggest you follow the steps Greg does exactly in order to get the idea.

You can also look it up ion the C11 pro manual-- there’s a link on my profile to it.

Ok, i watched the tutorial again and i’ve missed a thing before (set to “local”)…but still it’S different. I followed step by step, but in the second row in the input, where it is now to set to “controller” as in the video, in the “paramter” field i get just a number/value. In his video there is “CC” noted before…so i think something went wrong. When i continue and do as he he did, and add +7 in the ouput transformer, nothing happens on the vsti.
On the midi monitor it says the current controller value is “4”, so have to add 7 to get to #11 for expression ,right ? 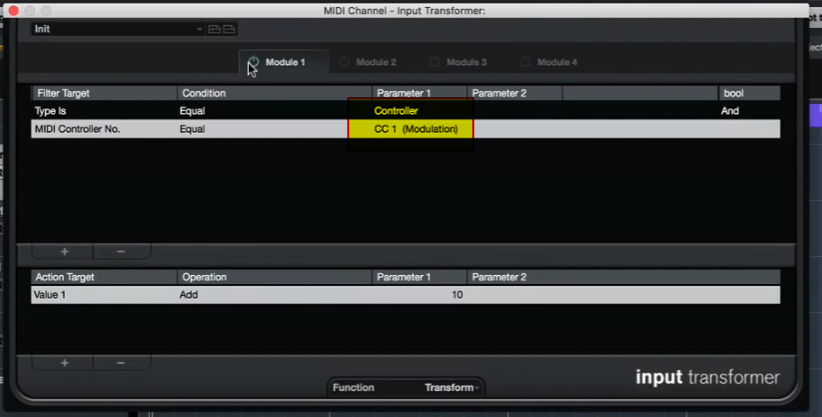 you could, you could also use an absolute value.

You also need to turn the module on with the power switch on the tab.

You also need to turn the module on with the power switch on the tab.

Jesus, thank you man, that was it…it works ! the Power switch…

I love reviving ancient gear! And there’s so much of it.

Defintiely yes, i love the KX88 and it’s worth all the hassle. So thanks again !

By the way, if there’s someone else around with a KX88, i found a tutorial on how to assign expression to any fader, but sadly, it is also different here…(expecting some additional input at the end which is not described…hence not working for me, but it did for others apparently)…anyway, it is on gearslutz, user “Westlake79” has 2 posts on it (scroll down): Yamaha KX88 tech question - Gearspace.com