I’ve searched, not found. I’ve used write automation before, but am having weird, frustrating problem with this track.

Even if I stop playback, as long as I have read/write automation on, I can drag that track’s fader down and when I let go, it snaps back up. I’ve looked all over and did a bunch of googles and found nothing that was this same scenario.

Issue 2: I’ll bet this is easy (because I think I’ve seen it before but cannot find it now)

EDIT: I have trying going back to a clean slate by inspecting the Event Editor and making sure all CC7 controller events are gone, then trying again, but the “fader pops back to original value” problem persists.

This is all creative-blocking. I’ve spent the past 1.5 hours forgetting whatever music was in my head that I wanted to get down, while trying to figure out this issue.

Thanks for any feedback,
Chris

This is how does automation work in Cubase, if you have other Automation Node behind the place, where you are writing and if you are in the Touch mode. If you would switch to the Auto-Latch mode, Cubase would write the new value until you press Stop.

Nuendo behaves differently in this use case.

The white dot is 0, but the Mix Console fader is at 54. There is a orange line in the Key Editor controller window that seems to correspond to the 54 value

Hi, I guess, you have MIDI CC7 automation in the track and in the MIDI > CC Automation Setup the Automation Merge Mode is set to Average.

if I stop playback, as long as I have read/write automation on, I can drag that track’s fader down and when I let go, it snaps back up. I’ve looked all over and did a bunch of googles and found nothing that was this same scenario.

Thanks all, it is as Martin said.

It’s interesting to me that it defaults to Touch mode and is Punch in/out oriented.

In my previous DAW, you were just writing console control movements, only when a control was moved, and there was no punch in/out, so when you stopped recording automation, you already had your last control state (the last event recorded) and there was no concept of returning to original value.

In other words, it was like being in Cross-Over mode , with “Fill” set to “To End” (when you stop playback, the last value remains and does not punch out to the punch in value).

Note: this was with fresh automation, no previous value to punch in/out from

Raino, I am not wanting to suspend automation, just needed to understand the various modes.

I think the way you use those terms is maybe a bit confusing.

Read up on “Virgin Territory” in the manual. I get the feeling that perhaps that’s what you’re looking for. The only odd thing about how it’s implemented is that it does pick up a parameter value when you locate on the timeline. But while stopped or playing back for example the fader will not ‘snap back’ if you move it if you’re where there is no written automation.

Thanks Mattias, I was wondering what Virgin Territory was.

I think I just need to use automation more (I had been just drawing in the event pane previously) and this will make more sense, I’ll will get my brain wrapped around the Cubase way of doing this. It’s more complicated than it was when I was first introduced to automation (both on a hardware console as well as a DAW), but it’s probably also more capable and worth learning.

Thanks to all who responded,
Chris

Hi all, I just wanted to amend this thread with an update, mostly for posterity so that future readers don’t think the issue is resolved, though I have yet to totally figure it out.

First off, automation does work as I thought it should (and did before). I went out to educate myself with some videos and found that it’s really quite straight forward. For instance, this video from the excellent Steinberg trainer guy (forget his name, speaks clearly, slowly, and plainly with a British accent): 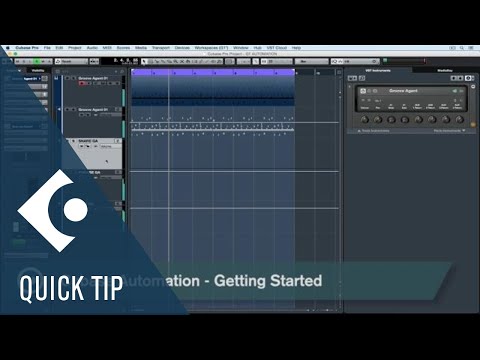 You DO just move the faders, and it DOESN’T snap back, and it plays back just fine. Same with panning. I tried this with a fresh project, recorded several bars of simple playing, automated vol/pan over it, and it just worked. I didn’t even bring up the Pro Automation Panel (but it was in Auto-Latch).

But then I went back to my current in-progress project and it still fails miserably.

In that same project, if I go down and create a fresh track and play some bars and automate vol/pan, it works fine. This can be a VST instrument or a standard MIDI track (single channel). But the existing multitimbral tracks are still problematic.

So let me ask this: the parts I’m having problems with is a group of tracks that are all MIDI multitimbral parts of the same device (Roland XV5080). There are something like 6-7 parts now. They all have their own MIDI channel, of course, but it’s the same MIDI port / device.

Because when I try to automate volume on an existing multitimbral part, in Auto-Latch or Cross-Over mode, it seems to go just fine during the [W]rite automation pass and I see the curves in the automation lanes, but

So I wonder if it isn’t that this is a multitimbral MIDI thing.

I also thought “well, I was manually drawing the curves before, so maybe there are bits left over that are throwing me for a loop”. Nope, I’ve deleted it all and inspected events in the list editor.

PS: I can go back to drawing automation curves, but it’s primitive. When you’re moving faders during playback, you’re hearing the changes live, something you don’t get drawing events.

If I understand you right, you are talking about MIDI track. Did you draw an automation of the Volume or MIDI CC7, please?

Yes, this is all MIDI tracks. I see now there is a difference between CC7 and Volume.

However, when I automate volume using the fader, the automation lane states “Volume”. I can hand write a CC7 curve in the controller lane, but it does not seem to effect / overwrite the volume in the track’s automation

I did some reading in the forums and it seems that automation volume like this is what you get for Instrument (VST) automation. Why am I getting it for MIDI tracks?

What’s more, the automation Volume is not very smooth. I can move the fader slowly, but it still inserts sparse volume events in the automation lane that results in choppy jumps in output volume. This happens even if I use a parabola to try and shape the automation.

Down in the controller pane when I draw CC7 with the parabola, it inserts many events to make it a nice curve that gives a smooth fade (up or down). However, as I stated earlier, this doesn’t make for nice live automation (hearing the results as you move the fader).

Drawing curves in the controller pane is all manual work, playback to review, go back if not happy and edit differently, etc. (nothing resembling live fader work).

Is there a setting that toggles the way fader automation works for MIDI tracks? I looked, but could not find anything.

What’s more, the automation Volume is not very smooth

Try to decrease the Reduction Level in the Automation Panel > Settings, please. Then you can also use the Bézier curve.

Down in the controller pane when I draw CC7 with the parabola, it inserts many events to make it a nice curve that gives a smooth fade (up or down).

You can use Bézier curve in the for the MIDI CCs too.

Drawing curves in the controller pane is all manual work,

You can use a MIDI Controller to draw the MIDI data.

Is there a setting that toggles the way fader automation works for MIDI tracks?