Recently purchased a Scarlet focusrite 18i20 2nd gen (upgraded from a focusrite 2i4 which was plug and play no issues) I use cubase le ai elements 8 on a MacBook Pro. When I registered the 18i20 on the focusrite website it said “don’t worry about downloading drivers for Mac, the 18i20 is plug and play for Mac” but when I hit record on cubase it says “Recording error: ASIO driver isn’t running” Ive tried downloading drivers anyway to no avail. I’ve called focusrite support and they said “idk it should be plug and play so I don’t know what to tell you”
I don’t know where to go from here. Any suggestions would be appreciated

When I go to “device setup” under “ASIO driver “ it says scarlet 18i20, so it is recognizing it but when I hit record it still gives the same recording error ASIO driver isn’t running

You could start by downloading the Focusrite Control 3.11.0 - Mac (2Gen) from the Focusrite official site and install it to see if that solves the problem. Might just be like the mixer/settings for the soundcard like in Windows. Worth a shot tho imo. 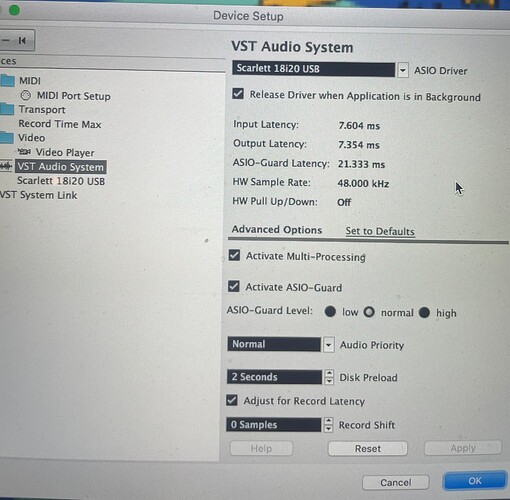 I’ll plug in a guitar and it will come out the monitors, but any plugins I have on the channel aren’t working only the DI sound. but when I hit record is when the error comes up 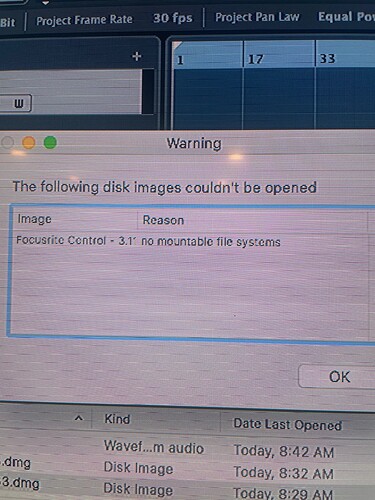 OK. Everything seems normal, seeing your screenshot. What is displayed in the Scarlett 18/20 USB pane ? In it, there should be listed all the inputs and outputs of your device, with added settings.

Beside this, I would say that hearing directly the dry sound without any plugins processing could be related to the Direct monitoring being activated. Does the Scarlett driver allows direct monitoring ? if so, check in the Scarlett 18/20 USB pane to cancel it, if needed.

These don’t solve the ‘ASIO driver isn’t running’ error, though. What is strange is that indeed, an installed ASIO driver isn’t relevent for an OSX based system to work. So, at this point, I’m afraid that I can’t help more…