I have cubase 9 elements, and i just downloaded the trial of Halion sonic 3.
When i import midi files, all the instruments are opened with “halion sonic SE” , can i replace sonic SE with Halion sonic 3 by default ?

I would like have halion sonic 3 instruments, and not replace all the instruments one by one.
Thanks

I wish that was possible, to have away
To set what default instrument will load .

Hi - I’m not at my machine right now, but I’m sure I recall there’s a Preference setting that allows the user to choose how to deal with MIDI imports (how they should open/what instrument). And, for when creating new MIDI tracks.

MIDIloops should always play back with whatever instrument(s) they were made with (provided the plugin(s) are installed on the system and have been scanned and recognized by CuBase). I.E. If you exported the loop when the instrument track was pointing to Retrologue, then that’s what it’s going to use during MediaBay preview, or when imported back into a project.

So for MIDIloops. Since Sonic 3 and SE get unique instrument IDs, when importing the MIDIloop into CuBase, it’s going to faithfully keep calling up the plugin the MIDIloop was made with.

Note, unless you intend to tweak the MIDIloop to take advantage of specific Sonic 3 content or features, there’s no real point in converting pre-exiting MIDIloops (such as what comes with CuBase) over to Sonic 3.

Having said that, there are times when you want to pull in one of your MIDIloops and swap plugins. So, to change the MIDIllop over to Sonic 3.

If you go to “File/Preferences/MIDI/MIDI File” you should notice a little pop up that is labeled “Destination”.

This option allows you to choose the default behavior of CuBase when importing a MIDI file into a project.

If you choose MIDI Tracks it will import the MIDI file and direct it to whatever plugin you last set on a MIDI track. If there is a particular device or plugin you’d like to force CuBase to use when it imports in this mode, then first load the instrument you like in the Rack, make a MIDI track, and point it to the instrument. Next time you import a MIDI file in this mode, it’s going to make new tracks and connect them to that last instrument you used. From here, if that reference track you made is in your way, you can get rid of it.

Note, when you work with MIDI Tracks and instruments in “Rack Mode”, you will get true MIDI faders on the Mixing console, in addition to at least one VST audio output track. You can manage MIDI mixing independently of the actual Audio Bus.

If you like, you can make a track preset that’s fast and easy to call up in CuBase (save a few clicks forcing a default instrument). Example: I typically like MIDI files I import to go ahead and point to my Fantom XR (an external synth); so, I’ve made a preset:

where I can call it up really quickly in future projects. 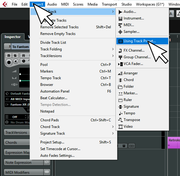 Also note, it’s easy to change groups of tracks in mass to use a given plugin or MIDI device after they have been imported. First, make sure the plugin or device you wish to use is set up in the Instrument Rack that you wish the selected MIDI tracks to use. Simply hold CTRL while selecting your tracks one by one. Once the tracks you wish to reassign are highlighted, hold shift and alt while clicking the output slot of the track inspector. Keep holding the key combo while you choose whatever instrument is loaded in the Rack. In short, the key combo allows you to change gobs of tracks in one go, so you do not have to go through and do it one track at a time.

This mode is similar to the MIDI Track mode above, but it automatically creates Instrument Tracks (and Instruments in the Rack) instead. Each track will get a complete instance of the last VST/i plugin you loaded into an instrument track (HALion SE by default). Instead of separating the audio bus of the plugin from MIDI faders as we’d get with MIDI tracks pointing to a Rack mode instrument, it gives you a unique audio stream output for each instrument directly on the Mixer (because each instrument track gets his own individual instance of the plugin).

Note, in this mode, any mixing you do via MIDI (I.E. In CC lanes of the Key Editor) are relative to any mixing you perform or automate with VST automation lanes. You will not get independent MIDI faders on the Mixing console.

In this mode, CuBase always loads a fresh instance of SE when importing that is forced into a special “General MIDI” mode. The data is imported to MIDI tracks that are connected to this fresh SE instance. SE gets loaded in “Rack Mode” with a single Stereo Audio bus that is separate from all the MIDI track faders. SE in this mode will use the ‘basic GM content set’ and attempt to call up/change the right sounds automatically (provided the user assigned sounds according to GM standards). In this mode, SE is a pretty good General MIDI interpreter. From here, you can always point the imported MIDI tracks to different plugins or devices at will.

Advantages to MIDI tracks and Rack Mode instruments are that you can manage the MIDI Mix independently from the Audio Bus(s). You get some extra features (such as MIDI Aux Sends) that you do not get with instrument tracks. These are great for working with a Multi Timberal instrument like Sonic 3; as you can have many tracks pointing to a single instance of Sonic.

Advantages to Instrument Tracks are that you can export MIDI Loops. These can keep up with your entire VSTi setup when exported/imported among all your projects. You can preview MIDIloops in MediaBay without having to load them into a project, and they’ll use whatever plugins they were made with, and sound just like you made them. When you import these MIDI loops into a project, it brings in all your instrument setting with it. Instrument tracks do not keep the Audio and MIDI bus seperate on the Mixing Console. Instrument tracks are super for working with mono-timberal plugins like Retrologue, or sforzando, the single instance UI of Halion Symphonic Orchestra, etc. With a bit of practice they’re also ideal for making drumloops (in MIDIloop format) with Grove Agent or any variant of HALion (Instrument tracks can ultimately share common VSTi plugins as well when desired, I.E. sharing a single instance of Sonic or Groove Agent among multiple instrument tracks. They are also great for eventually freezing and packing your premixed and arranged MIDI tracks down into MIDIloops that can be previewed directly in MediaBay, and pulled into future projects all ready to go.