Coming to WaveLab, from a world of other audio editors, I’m very used to having just one key that conveniently plays your selection, if any, or otherwise plays from your cursor position. I’ve tried to accomplish this in WL but failed miserably …

Can I do that somehow? Please tell me there’s a way, master PG. 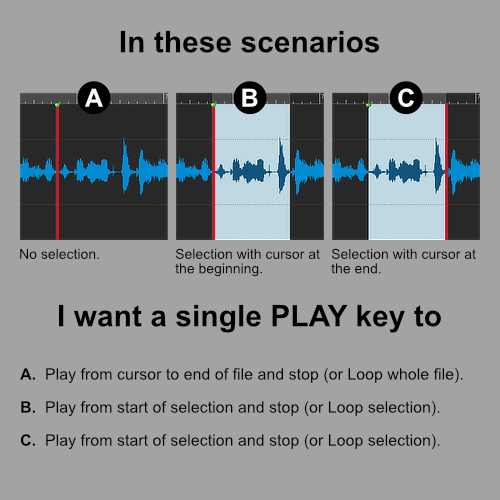 F6 will play the range. Shift+F6 loops selection. F7 will play from anchor. Spacebar plays from cursor to end of file. If this is what you were asking.

However, WL allows you to customize this: File>Open>Preferences>Shortcuts>Transport.

You will notice that there is a customization specifically for Cursor until end-of-file.

Most Transport buttons have options when you right-click on them.
Then, you can save a preset of all option, and trigger it with one custom shortcut (which can be a MIDI event…)
Did you try these?

Thanks gentlemen, but I still don’t understand how I can do what I want:

I want to use one singular key for play/stop, which should play from cursor or any active selection.

Playing Back from an Anchor or until an Anchor

For me, that doesn’t work when there’s no selection. 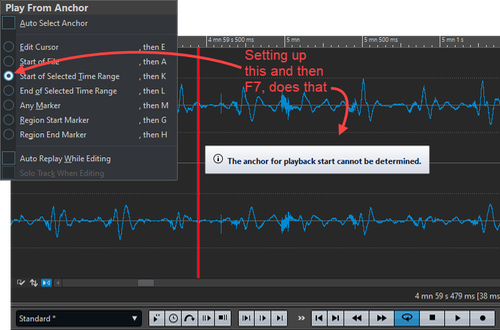 I basically want the same play operation as Audacity and most audio editors. It works like this:

Is there a time selection?

(Maybe this can be solved by a script and then binding a key to that script?)

Or - you might consider using the (quite extensive) options already available in WL:
Is there a selection? > F6
Is there no selection? > Spacebar
Or change these buttons to your liking…

There are 4 basic play shortcuts in WaveLab.

Current playback operation feels limited to me. I feel encumbered by the requirement to use multiple keys to play selected audio* vs. playing from cursor position. (*Selecting from a lower time point to a higher, i.e. dragging from left to right.)

I want to be able to use one play shortcut for both selection- and cursor-playback. Exactly how it works, let’s say, in Audacity (and many others). I’d like an added option that will either A) let the anchor stick to the beginning of selection when dragging from left to right, or B): “Ignore Anchor” option in the Play Audio Range settings window, which would ignore anchor location when playing selections. 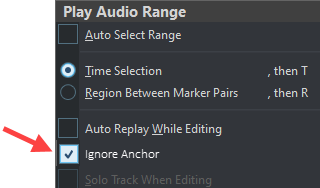 I’m aware of the different shortcuts (F6–F8) for different ways to play audio. While those might come in handy – and I respect that others might use them more than me – I rarely need them. If I want to play after the selection, I press 2 (custom key) to set the anchor at the end of selection and hit play, for example.

I think WaveLab should cater for those coming from other audio editors in terms of playback. I don’t want to rant too much, so I’ve deleted a lot of argumentation and stuff describing why I’m not in favor of having two keys for something other editors can do with one key (they have same key for cursor playback and selection playback).

But in a nutshell, here’s where the playback logic breaks :

This happens because the direction – left→right or left←right – when you drag your selection, decides whether it can be played with Spacebar or not! You can even select the exact same time portion as in step 3, but if you dragged it from left to right (4s→6s), the Spacebar does something different. It’s like if you used Photoshop, and dragged a marquee selection in a SW to NE direction and when you painted over it, pixels only appeared within the selection – and if you dragged the exact same marquee selection but from NE to SW and painted over it, pixels would only appear outside of the selection, in which you’ve unwillingly entered a different mode. And to get back to painting within the marquee, you’d have to press F6. Does this make sense? It’s an unnecessary roundtrip that’s not intuitive. Since I practically live in this application and love it so much, I can’t stop hoping for some positive feedback on this. What do you think, PG

This workflow has some severe restriction because, for example, and if I follow you correctly, you just can’t put the cursor 2 seconds before a selection and hit play to listen to what is located just before the selection.

PG, I’m not sure we’re thinking of the same thing? I can’t envision the restrictions you mentioned. You can place the cursor and play from 2 secs before the selection and still keep the selection.

As always, I made a video that hopefully shows exactly what I’m looking for: https://www.dropbox.com/s/hqx44w4bk8dx8ka/Play%20selection%20regardless%20of%20click%20%26%20drag-direction.mp4?dl=0

I think the description concludes my point. Regardfully, I have to say that, to me, it’s clear that something needs to be done with Spacebar and audio selection playback really.

Thanks for the video. The reason of the current behavior, is that playback starts from the edit cursor. But I will tell you something: sometimes I am myself annoyed by the case you illustrate.
I will think about a solution.